10 unexpected blessings of being the parent of a missionary 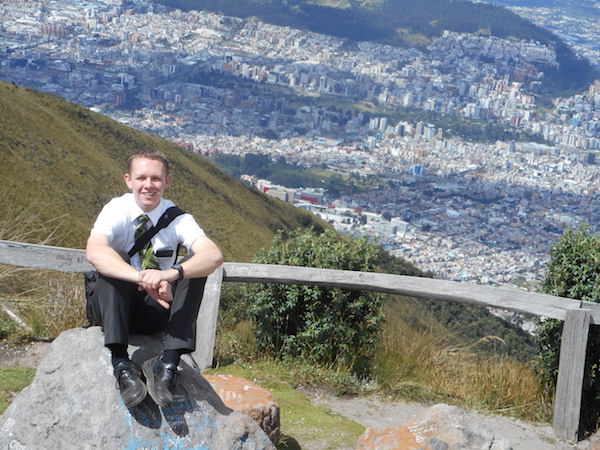 It was one of the toughest, most heart-wrenching days of my life.

That was the morning we dropped off our oldest son at the Salt Lake International Airport so he could fly to the Mexico City Missionary Training Center to prepare for his mission to Ecuador.

There were other families and missionaries at the airport huddled close, taking photos, giving hugs and shedding tears. It was both poignant and awkward as my wife and my five other sons said our final goodbyes.

As we watched our son disappear through the security line, we just stood there, hoping he would get to the right gate. He’s a smart kid, but we couldn’t help but wondering if he would he make his flight to Phoenix and his connecting flight to Mexico City. He had never gone outside the country before in his life.

We drove home from the airport in silence, other than the sound of occasional, muffled sobs. Our car had never been so quiet. As I gazed at our five sons in the rearview mirror, I noticed they had this bewildered and shell-shocked look on their faces, like we had just dropped off a beloved family pet at the Humane Society.

Certainly, it was a bittersweet event. We had looked forward to this day since he was born. We had talked about it, prepared for it, prayed for it. But once he was gone, I couldn’t help but ask myself, “What have we done?”

As I drove down I-15 toward home, separation anxiety hit me and tears filled my eyes. I could barely see the road. I already missed my son.

Then the thought crossed my mind: If all of our other boys leave for their missions at 18, as our oldest did, there’s a chance that drive to the airport that morning could be the last time we’d all be together for almost a decade.

The first several hours after we returned home from the airport crawled like a prison sentence. Just two years, 24 months, 104 weeks, 730 days, 17,520 hours to go.

When we received a brief email from our son late that afternoon from the Mexico City MTC, we were thrilled and relieved. Then we knew we’d be able to sleep that night.

Of course what we were enduring that day was nothing new. This was not a unique experience. LDS families have been going through this every week for decades. Suddenly I had a newfound respect for parents who sent kids on missions, including my own. I never realized how hard it would be. For the first time, I viewed missionary service from the viewpoint of a parent rather than from the viewpoint of a missionary.

Our son has been on his mission in Ecuador for a little more than one year. Like any other missionary, he has had ups and downs along the way as he has had to adjust to a new culture, a new language and new food (he’s had several hospital visits due to illnesses). But he’s matured and grown spiritually. He loves his mission and the people of Ecuador.

In early September, we’ll go through this all over again when our second son flies to the Buenos Aires, Argentina MTC before serving in Paraguay. I’ve heard that it doesn’t get any easier.

I’ve always known that families receive many blessings when they send a missionary into the field, but now as a first-time parent of a missionary, I now know that’s true, and I understand what that means. Here are 10 unexpected blessings we’ve received:

1. I look forward to, and love, Mondays.

When I served a mission in Chile years ago, the only form of communication I had was through letters, which would take weeks to arrive to the United States.

Now, thanks to email, and the miracle of technology, we can receive word from missionaries in real-time, without a month-long lag. It’s like receiving a priceless gift every Monday, akin to Christmas morning. On Monday afternoons, I stare at my computer screen in anticipation of receiving the latest email from my son. And when I get his latest message, I savor every word, analyze it, and read it over and over again. Reading about his experiences, and reading his testimony, and seeing pictures, is a true blessing.

Here’s what President Thomas S. Monson has said about missionary letters. This was in 1987, before the advent of email, but it still applies:

[pullquote]“In many respects, a mission is a family calling. The letters which a missionary sends to Mother and Father are packed with power — spiritual power. They are filled with faith — abiding faith. I’ve always maintained that such letters seem to pass through a heavenly post office before being delivered to home and family.” —President Thomas S. Monson[/pullquote]

“In many respects, a mission is a family calling. The letters which a missionary sends to Mother and Father are packed with power — spiritual power. They are filled with faith — abiding faith. I’ve always maintained that such letters seem to pass through a heavenly post office before being delivered to home and family. Mother treasures every word. Father fills with pride. The letters are read over and over again — and are never discarded. I trust parents will remember that their letters to a missionary son or daughter bring home and heaven close to him or to her and provide a renewal of commitment to the sacred calling of missionary. God will inspire you as you take pen in hand to express to one you love the feelings of your soul and the love of your heart.”

2. The influence a missionary has on siblings — and parents.

I’ve noticed my younger sons being amazed at my son’s transformation from boy to man during his mission. All the things that we as parents had been saying to our children for years are being repeated by our missionary son in his personal letters to them — encouraging them to read The Book of Mormon, say their prayers and be obedient. Our sons know much better now, from their oldest brother’s experience, what it means to be a missionary. They’re learning that it’s the hardest thing they will do at that point of their lives — and it’s worth it. They will be better missionaries because of their brother’s example.

3. The kindness, generosity and concern shown to my son and to our family.

After our son’s farewell, family, friends and ward members were very generous by contributing financially to his mission. That was humbling.

The day after our son left for his mission and we were still feeling the shock and sting of that separation, a couple of families in our ward that had missionaries serving reached out to us in simple ways to let us know that they were thinking of us and praying for us during that difficult time. Their acts of empathy soothed some of the pain we were feeling and let us know we were not alone. And every time someone asks me at work or at the grocery store or at church about our son, I appreciate their concern and I’m happy to share an update. I also appreciate it when friends or family take some time to write him an email. 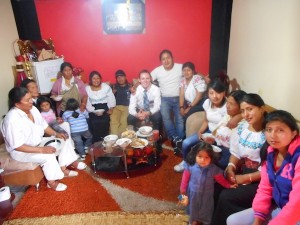 Ryan Call sits with a family from his LDS mission in Ecuador. (Photo courtesy Jeff Call)

4. Forging close relationships with others who have missionaries serving.

It’s kind of like being members of a club when you have a son or daughter serving a mission. You see other parents of missionaries and it’s great to commiserate and talk about your missionaries’ experiences. You know they’re people who can empathize with you. Another family in our ward has a son serving in the same mission as our son, and another family in our stake has a son who is also in the same mission and left with our son to the MTC. It’s fun to see them, compare notes and provide support to each other. In the process, we are forging strong bonds.

5. Memories of your own mission experience come alive again.

I’ve noticed that since my son left for his mission, I’ve reminisced more than ever about my own missionary service and the blessing it was for me to serve a mission. Some of his experiences have reminded me about my own. In the process, I’ve come to realize, over and over again, that he is much better prepared to be a missionary than I was, even though he was 18 when he left and I was 19 when I left.

6. Information from the mission president and his wife.

I know not all missions are the same and neither are all mission presidents. But we feel blessed that my son’s mission president and his wife send out occasional videos and pictures of their missionaries for family back home to enjoy. Sometimes, on a random Saturday afternoon, we’ll see photos of our son on Facebook at a training meeting or mission conference. It’s a simple thing, but it means a lot to us as parents. It’s worth more than gold. Besides, it’s comforting to know that our missionaries have a “mom and dad” looking after them during their service.

While Christmas and Mother’s Day have always been special holidays, the fact we can Skype our missionary on these days make them even more joyful. To me, it’s the highlight of those days and everything is centered around that Skype call. To be able see our son, talk to him, ask him questions, and to hear the Spanish accent in his voice as he speaks English, is amazing. Another miracle of technology.

8. Our son’s missionary plaque hanging in the church.

It’s not like we go searching for it every time we’re in the church building, but when I pass by the glass case next to the bishop’s office and see our son’s missionary plaque — featuring his picture and favorite scripture — it’s always a delight. It’s reassuring to see his face there with all the other missionaries from our ward.

Praying on behalf of our son and brother during family prayers every morning and night has brought us closer together. It’s a sweet experience to hear one of our younger children sincerely pray for his brother serving a mission, asking Heavenly Father to protect him and help him find people who are prepared to receive the gospel message.

10. Though he’s far away, I feel a closer relationship with my son.

They say absence makes the heart grow fonder. I’ve found this to be true with my missionary son. Having also served in South America, I understand somewhat what my son is going through, and I’ve enjoyed sharing my experiences and advice. He’s asked me about dealing with difficult companions, learning the language, and how to help investigators. Before his mission, my son wasn’t one to ask my advice very often. But now he does on a regular basis. In one of his recent letters, he told me how he looks forward to talking to me in-depth about the gospel and his experiences from his mission. I can’t wait for that.

Only one year to go.