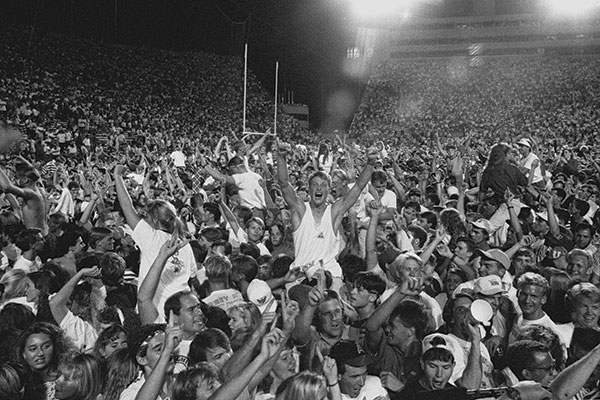 Tom Holmoe and Bronco Mendenhall have made it clear they will go anywhere to play the best college football teams in the country. Those teams have also made it clear that few — if any — of them will make a trip to LaVell Edwards Stadium.

On Sept. 8, 1990 — 25 years ago — the defending national champions and preseason No. 1-ranked Miami traveled to Provo for its season opener. A then-record 66,235 fans witnessed an epic game that came down to the final seconds, with BYU hanging on 28-21. 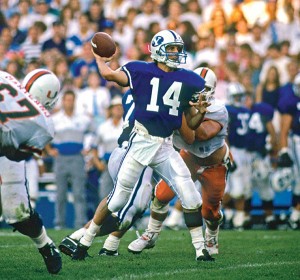 In the weeks after the Miami win, Ty and the BYU media relations team fielded requests from major news outlets including Sports Illustrated. Plus, people kept wanting his autograph. “My apartment living room started to fill up with memorabilia that people wanted me to sign — Shirts, footballs, pictures. People would drop it off and my roommates would say, ‘He’s not here, but we’ll have him sign it.’ My roommates probably signed half of that stuff because they were tired of people stopping by and figuring out whose stuff was whose.” (Photo by Mark Philbrick/BYU Photo)

By Ty Detmer
As told by Jeanette Bennett

We felt confident going into the Miami game. If we could hang with them in the first part of the game, we would give ourselves a chance. We had played at Miami a couple years before and learned a lot about their speed and how they played.

The fans were thrilled about us playing Miami at home. But the media? Not so much. Miami was ranked No. 1 and we were 16th. It was the first time I remember that the stands were totally full before the game. Most of the time, people were still trickling in as the game started. But that night was electric from the start. People were there watching us warm up! The crowd was into it right from the start and kept that energy level all the way through. That gave us momentum. When a big play happened, the crowd went crazy and then we could carry that wave.

When you go to college, you hope to play in that type of atmosphere where you hear and feel the roar of the crowd. I could feel the vibration from the stands.

I’ve watched the game on ESPN Classic and the BYU Channel over the years. I didn’t realize we had five turnovers. There were a lot of plays I don’t remember, but quite a few I do remember.

One of the big moments for me was when I scrambled to the right and stepped back. Two defenders hit in front of me. I ended up throwing a touchdown pass on that play (the go-ahead score in the third quarter). I remember when I got hit in the pocket and fumbled. I remember the play when my chin got split open — but I remember it for different reasons. When the defender landed on me, the first thing to hit was my butt and then his knee went into my quad. I got up limping. I didn’t realize my chin was split open until a little later — my butt and quads were hurting more than anything. The chin was nothing more than a flesh wound (laughing).

Going up just before half-time — despite turning it over a few times in the first half — was huge for our confidence. We knew we could play with them.

I don’t remember much about halftime. LaVell is not a real excitable kind of guy. Things were calm. It was more of a coaching talk. “Here is what they are doing. Here is what we are going to do. Let’s make adjustments.”

At that time, BYU’s defense wasn’t talked about as much as they are now. But we put the defense in a tough spot in that game.

Keeping Miami to 21 points was a big deal. Nobody had heard of Ervin Lee and he was put into the nickel situation. We put in an extra DB to help counter their passing game, and Ervin stepped up and made big plays. So did Jared Leavitt. The defense sealed the game at the end. We were up by 7, but we kept saying we gotta have a stop here. I was on pins and needles that last drive.  I was a spectator on the sideline for that last pass breakup by Ervin Lee. I was so relieved!

When the Miami game ended, the crowd rushed the field, which I had never experienced. I was afraid I was going to get caught on the field and miss the post-game speech by LaVell. So I made my way up on the railing and shimmied down to the tunnel and into the locker room.

3 things you Probably forgot about the Miami Game

1. It was BYU’s second game of the season.

Even though all eyes were on the home opener against Miami, BYU beat UTEP 30-10 on the road the week prior. The Provo game was the season opener for Miami.

Miami took the lead with under two minutes left in the half, but Detmer led the team to a TD with seconds left on 7-7 passing.

3. Neither team scored in the fourth quarter.

Stomach pains were common as every late-game possession could have resulted in gridiron doom for the Cougars.

I was the only one there.

I realized I could have stayed out and celebrated a little more. I sat in the locker room for five minutes all alone pacing. I didn’t know what to do with myself.

The game was huge for me personally because of all the Heisman attention that came out of it. You could go down the list of former BYU quarterbacks who finished second, third or fourth in the Heisman. People were always pointing to our schedule and saying we weren’t playing top-ranked teams. Having the opportunity to play the No. 1 team and beat them gave us credibility. If Jim McMahon or Steve Young had been given that opportunity, they would have won the Heisman.

That game changed my life, along with everything that goes with the Heisman Trophy. Later when I was getting drafted in the NFL or struggling in my career, people could always go back and say, “But he beat a No. 1 team.” It validated everything we were doing in Provo. I didn’t realize at the time what that game would mean for my life.

Now that I’ve had a chance to step back, I realize those are the highlights that always get played for me. Everybody pointed to that game when voting for the Heisman. They didn’t have ESPN 2, so ours was the only game on that night. The whole country got a chance to see what we’re all about at BYU.

Traditionally, at the Heisman awards banquet they have the winners from 10, 25 and 50 years ago speak.

I haven’t been officially told yet, but I’m planning on it. I want to talk about the impact the award had on my life. I remember Earl Campbell getting up and saying that we don’t realize it right now, but the Heisman will do more for us than we’ll ever do for it. That is true. That’s how I’m introduced at every event or identified in any article. It’s always, “Ty Detmer, Heisman Trophy winner.” It’s become part of my name.

The Miami game ranks right at the top of my personal favorite moments. Others include some high school games, like when we won district for the first time ever for our school. We were in the first playoff game our school ever had. My first start in the NFL is memorable. Beating the Cowboys in Texas Stadium. Starting in my first NFL playoff game. But for my college career? It’s hard to beat the Miami game.