Recipe: Scott Mitchell’s Most Important Meal of the Day 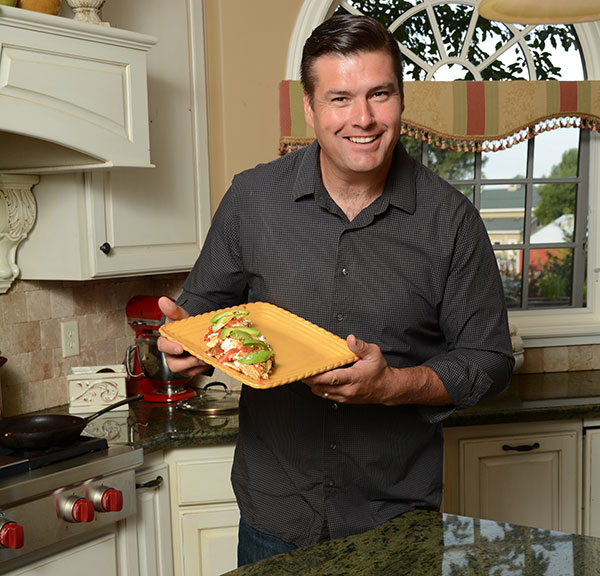 Scott Mitchell won a cooking competition on “The Biggest Loser” with his omelet recipe. Prior to going on “The Biggest Loser” in 2014, this former NFL quarterback weighed 366 pounds. His wife, Wendy, would make him a healthy lunch every day, which he would eat on the way to work in Salt Lake City. If he had time, he would also stop at Beto’s and get a breakfast burrito and large soda. He ate out for lunch every day. “If it was all-you-can-eat, it was for me,” Scott says. On the way home, he would stop by Popeyes at the Point of the Mountain and order a four-piece meal with three chicken strips on the side. When he got home, he ate dinner with his family. He was consuming between 7,700 and 10,000 calories a day. On the show, his daily allotment was 1,800. On his way home from the airport after the show ended, Scott’s first stop was Sprouts in Orem to show Wendy the groceries he would now be purchasing for their kitchen. (Photo by Dave Blackhurst)

When a nutritionist visited the set of “The Biggest Loser,” Scott stayed in the kitchen all day and “messed around” while learning how to make healthy food taste great.

“It’s all about texture and flavor,” Scott says.

Scott won the cooking challenge on the show with this breakfast omelet and earned a one-pound advantage in the weigh-in.

“I’m a breakfast person,” Scott says. “I had to reposition breakfast but not give up the taste.”

Scott fixes a version of this omelet nearly every single day.

Cube 1-2 ounces salmon and add to the pan

Top the omelet with avocado slices and salsa

A few sprigs of cilantro

Garlic and sea salt to taste

Read about Scott Mitchell’s “The Biggest Loser” experience as well as his life leading up to the show here.

Is school stressing your kids out? 7 tips for managing school-related stress Previous post

25 years after ‘The Game’: Ty Detmer relives the 1990 Miami upset Next post