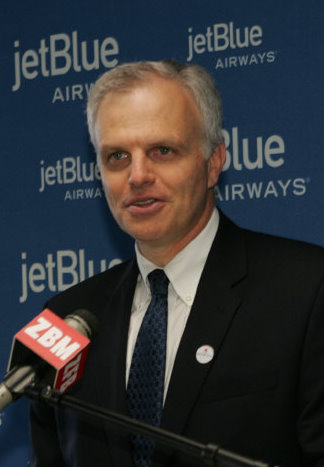 JetBlue Airways Chairman and former CEO David Neeleman speaks at Bermuda International Airport on the occasion of the Inaugural Flight from JFK to BDA. (Photo by James G. Howes)

Members of The Church of Jesus Christ of Latter-day Saints are known for being honest, philanthropic, goal-driven, successful people — a perfect combination for business success. Over the years, dozens of Mormons have made significant contributions to business and started their own corporate power houses. Here are 10 power-house businesses owned, founded or headed by LDS people.

Mormon David Neeleman founded JetBlue in 1999, though it was called “NewAir” at the time. He is no longer the CEO of the company, but during the almost decade he spent at the helm of the company, he was known to sit on the back row of his company’s planes, which had seats that didn’t recline, when traveling to demonstrate that serving the customer was more important that serving the CEO. He launched a new Brazilian airline called Azul in 2008.

Marriott International was founded by Mormon J. Willard Marriott and is now led by his son, Bill Marriott. The hospitality company has more than 4,000 properties in more than 80 countries and territories. Each Marriott hotel room has a Bible as well as a copy of The Book of Mormon, and in 2011, the company announced that pornography would not be offered as entertainment in new hotel rooms.

The software program WordPerfect was originally developed under contract at Brigham Young University in 1979 and grew to become one of the most widely used software programs in the late 20th century. Alan Ashton, a co-founder of the company, is a member of the LDS Church and a grandson of President David O. McKay. He is currently serving as president of the Provo Utah Temple.

1-800-Contacts began when Jonathan C. Coon, an advertising and public relations student at BYU, created a small business selling contact lenses to his fellow students. He entered a Business Plan Competition hosted by the Marriott School of Management in 1995 and won money to help him grow his business. Today, the company is headquartered in Orem and employs over 1,000 people.

Bain Capital was founded in 1984 by Mormon Mitt Romney and two other partners, T. Coleman Andrews III and Eric Kriss. The company is a global alternative investment firm that specializes in private equity, venture capital and other areas and manages more than $75 billion today.

Mormon Nolan D. Archibald is a well-known business man who served as chairman of the board, president, and CEO of Black & Decker. When he became president and CEO in 1986, he was the youngest CEO of a Fortune 500 Company at age 42. He and his wife, Margaret, have seven sons and one daughter. All of their sons are Eagle Scouts and served LDS missions.

Franklin Covey Co. was founded in 1997 and is based in West Valley City, Utah. Mormons Stephen R. Covey and Hyrum W. Smith founded the company, which provides time management training and products based on the writings of Covey and Benjamin Franklin.

Huntsman Corporation, founded by Mormon Jon Meade Huntsman, Sr., is an American multinational manufacturer of chemical products. Huntsman, who has served as an area seventy and president of the Washington, D.C., Mission, is currently executive chairman of the company, which did $12.723 billion in revenue in 2014. Huntsman is a well-known philanthropist.

SkyWest Airlines was created when Mormon Ralph Atkin, a lawyer in St. George, Utah, purchased Dixie Airlines in 1972. It was initially meant to fly businessmen from St. George to Salt Lake City, and after some struggles, the company expanded across the western United States. Today, it has a fleet of 341 aircraft that fly to 189 destinations.

Headquartered in Provo, Nu Skin Enterprises was founded by Mormon Blake M. Roney and others. The company is a multilevel marketing company that provides personal care products and dietary supplements. In 2012, the company did over $2.1 billion in revenue. Roney served as a mission president in France from 2012 to 2015.