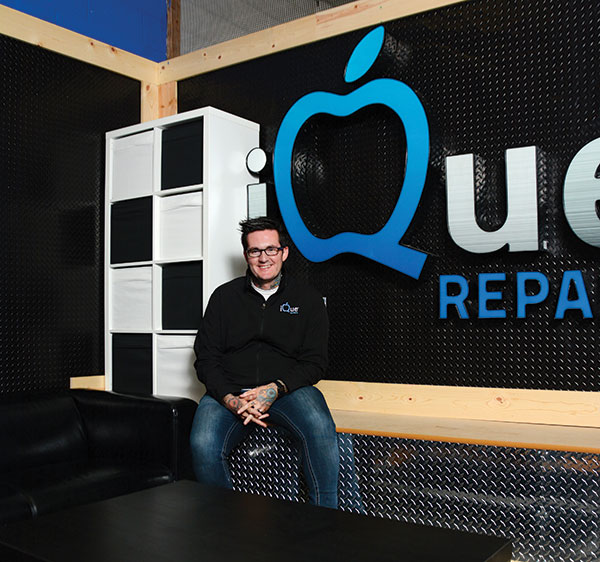 MR. FIX-IT KC Kelly is a fixer. He grew up in a “heavy, broken home” — and moved out at 16 to support himself. At 20, he lost his job — and became an entrepreneur. His company, iQue Repair, fixes our most-prized technology. “My parents made a lot of crappy decisions, but despite that, my mom always told me I could be anything I wanted to be,” he says. “Obstacles are just obstacles. Nothing will ever hold me back.” (Photo by Dave Blackhurst)

iQue Repair fixes the devices near and dear to our ears. But before the $1.5-million company became the Apple of our i, founder KC Kelly went through the ultimate ups and devastating downs of owning and growing a business. Here’s the ring around.

I was working for a company called Silencer Co. — the quietest gun silencer in the world. I was brought in as one of the founding members, but the CEO and I didn’t really get along. He’s wired as an entrepreneur, and so am I. It was a mutual layoff.

My wife was five months pregnant, and I was worried about taking care of her and our baby. Now, listen. I’m a self-proclaimed “tattooed weird-looking guy.” People will say to me, “Oh, I didn’t even notice your tattoos!” And I’m like, “Yeah, OK.” (laughs) But being this “tattooed weird-looking guy” in the state of Utah, I was out of a job. I applied to a hundred jobs and got 20 interviews. At the end of every interview, they would tell me, “You have a lot of skills, but you don’t fit our culture.” Okaaaaay.

I started doing software repair. I advertised through KSL, and I traveled around town. I got contracted by a local store to do computer service, and I realized this guy was making a ton of money fixing iPhone screens. He wasn’t a great entrepreneur. He would spend cash from the till to go buy cars. His son would run up and punch people in the lobby for no reason. It was the worst, craziest culture — and he was killing it in sales. I knew if he could make a ton of money with no effort, I had an opportunity on my hands.

I asked if he was opposed to me starting my own store. “I honestly don’t care,” he said. I got that in writing, obviously, and within 14 days I opened up my first store. It was a 700-square-foot hole-in-the-wall. We painted, built some desks and opened our doors. I’m a bit of a rocket.

At the time, our biggest competitor had 11 stores. I knew I could beat that. Within 15 months, we went from one store to seven and had 40 employees. We were making money. We were creating jobs. We were building an empire.

Then there was bleeding. Oh, the bleeding. We were bleeding $30,000 per month at seven stores, and we were $140,000 in debt after five or six months. We knew we would bleed for a period of time, but it quickly got out of hand. We grew too fast and didn’t have the cash flow to back it up. We were distracted and unfocused.

[pullquote]ROCK IT OUT KC Kelly is in a rock band at his church, The Rock Church. “Out of 2,000 members, 110 of us are musicians. And we’re good. We’re the best musicians in the world known for loving Jesus!” he says. “Without a doubt, my faith drives my decisions in my business.”[/pullquote]

Quality over quantity — that became my new plan. We started closing stores one by one until we got down to three stores. We focused on our teams, on the infrastructure, on the systems. With four stores closing, most people thought we were failing. But our vanity didn’t matter. We had to take back control of the business and rebuild.

Closing those stores was the hardest. It killed me to let my friends go. But we worked hard to take care of them. We paid severance packages or paid for their healthcare for a time. We worked to get each one of them great employment opportunities.

Enter John Keller. He’s from RPM Revenue Drivers, and he told me, “I will be your mentor.” This guy has helped over 300 companies grow and succeed. He walked me through everything — the business model, systems, profit-loss statements, investment strategies, the economics of finance. It was like hanging out with a bodybuilder.

We make more money in three stores than we ever did in seven. And it’s because of our focus. We have 20 employees, and every one is an MVP. Our employees are FAT — faithful, available, teachable.

We are revolutionizing the way the world thinks about repair versus replacement. We support new tech, but there is an economy for repair. We are like the used car dealership for technology.

I break my phone once every three months — and I still get that sick feeling in my stomach. I know exactly how our customers feel about potential cost and lost files and photos. We work with that urgency in mind. We are memory savers.

I’ve aged. I feel like it’s been 20 years — and it’s only been four. I have gray hair now. My body is sore in the morning. My mind is always racing. But I wouldn’t trade it for anything. We entrepreneurs will work a hundred hours for ourselves so we don’t have to work 40 hours for someone else.

Find out which companies made the UV50 “30 Startups To Watch” list here.