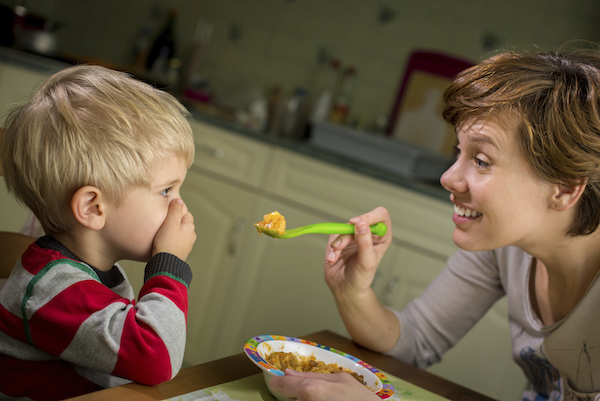 Tired of mealtime drama? Sometimes picky eating is more than just frustrating behavior: Children who are intensely picky (or selective) eaters are more than twice as likely to develop depression and anxiety than those with normal eating habits, according to a study published in August in the journal Pediatrics.

While only about 3 percent of children are severely selective eaters, it’s typical for many children to struggle with certain foods.  We asked two experts to share their tips and tricks for dealing with finicky eaters. Mindy Probst is a registered dietitian at Utah Valley Regional Medical Center. Marie Anderson is the family consumer science educator at the Utah County office of the Utah State University Extension. Here are their 10 tips for introducing new foods to your children and making mealtime more enjoyable.

“If your kids see you treating something like it doesn’t taste good, they aren’t going to want to try it,” says Mindy Probst. Make it a point to be enthusiastic about vegetables and other healthy foods at mealtime, she says, so your kids will want to eat those foods too.

Children will be more likely to eat at mealtimes if they are hungry, so keep to a structured meal and snack schedule, says Probst. Having regular meals followed by a snack two hours later works for most children. Some kids may need a snack at bedtime, while Probst recommends that adults typically stop eating a few hours before they go to sleep. Sticking to a routine allows children to get used to a hunger-fullness pattern, says Probst, and may lessen mealtime drama.

Home-cooked family meals offer a greater variety of foods than something picked up on-the-go, says Probst. And your children are more likely to try new foods in the comfort of their own homes. “Make mealtime a calm, peaceful, enjoyable time,” says Probst. “I know that is difficult in today’s hectic world, but it makes children more likely to accept a variety of foods.” Marie Anderson recommends turning off the TV and putting away phones and other devices so families can focus on the task at hand.

When children have contributed to a meal and feel invested in the process, they may be more likely to eat what’s being served, says Probst. And you can add a little pizzazz to new foods, says Anderson. Serve dipping sauce with vegetables, for example, or cut fruits into fun shapes.

Instead of asking your child to try many new foods at once, introduce one or two items along with something you know she will eat, says Probst. It can sometimes be stressful for children when all the foods on their plate are new.

Don’t ask your children to literally bite off more than they can chew. “Serving large portions can overwhelm a child and make him less likely to try the food,” says Probst. Cut items into small bits that children can easily manipulate on their plate, she says. Anderson says to keep in mind that children need to eat less than adults, so parents need to respect their smaller appetites.

Dessert should be an occasional treat enjoyed once or twice a week, says Anderson, and not the reward for completing a meal. “Dessert just increases children’s desire to have sweets, and we need to encourage them to eat healthy,” she says.

With picky eaters, persistence pays off, say Anderson and Probst. Children may need to be offered a food 10-15 times before they will accept it. “Sometimes it just takes several times to get used to the taste or the texture or the smell of the new food,” Probst says. “It’s definitely a struggle, but I think that it’s important to keep trying. Letting them see you enjoy healthy, nutritious foods will hopefully lead them to be more accepting of them in the future.”

“You don’t want mealtime to turn into a battle,” says Probst. “Maybe encourage children to try one bite, but you don’t have to force them to finish the whole portion.” Do your best to make mealtime a happy and positive experience, she says.

Children with disorders on the autism spectrum often have selective-eating issues that require professional guidance. And if your child isn’t gaining weight or growing according to their growth charts, consult your pediatrician, says Probst.

6 restaurants win Provo's 'Taste of the Valley' Next post