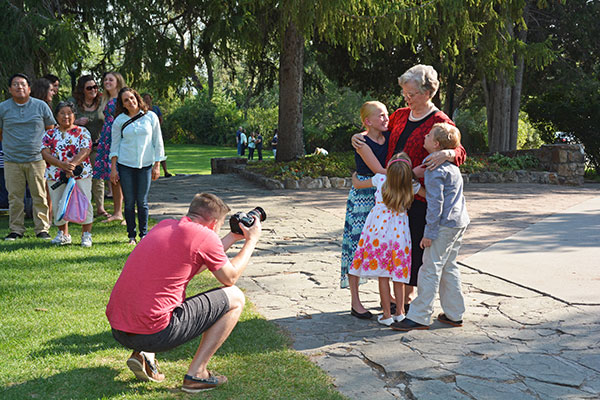 Janice Kapp Perry hugs members of the One Voice Children’s Choir while they film a music video for her popular Primary hymn, “A Child’s Prayer.” The music video was filmed at the American Fork Amphitheater. (Photo by Rebecca Lane)

A crowd of children sit around Janice Kapp Perry as the camera rolls, but Perry doesn’t seem aware of the cameras — she is focused on the children.

“Don’t you have days when things aren’t quite going right and you say your prayers and they’re not immediately answered, so you might have a thought something like, ‘Heavenly Father, are you really there?’” Perry asked the children.

The soft-spoken woman best known for her LDS hymns had the children sing the answer back to her, “Pray, He is there. Speak, He is listening.”

The words are from her No. 1-voted LDS hymn “A Child’s Prayer” and the children who joined her are from One Voice Children’s Choir; the choir collaborated with her to record a music video for her new hymnbook,”A Songbook for LDS Families,” which will be released at the beginning of October.

Masa Fukuda, the director of One Voice Children’s Choir, has worked on with Perry on projects in the past, including helping her translate songs into Japanese and working on Perry’s “A Women’s Heart” project.

“I think it’s a huge honor for us to be involved,” Fukuda said. “It’s something that I grew up with and was inspired by and helped and encouraged by her music. I know that a lot of our kids feel the same way although they probably don’t know that these songs were written by her. They have a living legend in their midst.” 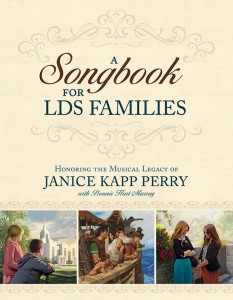 “A Songbook for LDS Families” has 15 of Janice Kapp Perry’s best-known songs as well as 28 new songs about the Book of Mormon.

The music video features clips from “The Cokeville Miracle,” a movie based on a true story about 100 children and teachers held captive in a small elementary school in Wyoming. Covenant Communications, the company that produced the music video, decided to include the clips because the children sang “A Child’s Prayer” when they were fearing the bomb would go off.

“A Child’s Prayer” is one of Perry’s 15 most beloved hymns included in “A Songbook for LDS Families.” The second part of the book has 28 never-before-seen Book of Mormon hymns with music composed by Perry and lyrics written by Bonnie Hart Murray.

“This lady from Colorado just had an epiphany of a hymn come to her,” Perry said of Murray. “She always worried that there aren’t direct Book of Mormon hymns in the Hymn Book. There are a couple that kind of allude to it. So she kept praying about that and she said one day this hymn, ‘The Book of Mormon Has Come Forth,’ came to her so clearly that she wrote these verses.”

Murray sent her lyrics to the LDS Church asking if they knew someone who wrote music and Perry was sent the text to which Perry responded, “Wow, usually they aren’t that good.”

Perry and Murray’s first song went on to a contest, so they continued working together for eight years to write the 28 original Book of Mormon songs.

“I’d be thrilled if (the songs) became part of their home evenings,” Perry said.

[pullquote]”When I saw these beautiful paintings with the songs in the quality book that Covenant has made. The pages feel good, smooth, everything is quality. To see some of Arnold Fribery’s paintings with the Book of Mormon hymns took my breath away.” —Janice Kapp Perry, composer[/pullquote]

The songbook comes with CDs for accompaniment in the back so people who don’t have a piano can sing the songs. Also, it was important to Perry and Murray to have artwork alongside the songs in the book. They were able to get art from Greg Olsen, Simon Dewey, Arnold Friberg and Tom Lovell.

“I just saw my first copy of the book yesterday in color,” Perry said. … “When I saw these beautiful paintings with the songs in the quality book that Covenant has made. The pages feel good, smooth, everything is quality. To see some of Arnold Friberg’s paintings with the Book of Mormon hymns took my breath away.”

Perry says she loves all the songs, but her favorite Book of Mormon song in the book is “That Moment of Moments.”

“I tried to make it as sacred sounding as a hymn could be and have the passion of what they might have felt at that time,” Perry said. “I have several that I really close, but that’s my favorite because it’s my favorite moment.”

“A Songbook for LDS Families” will be released in book stores in October. Learn more about the book at covenant-lds.com and on Covenant Communications Facebook page.

Find out how they filmed the music video and get a behind-the-scenes look here.

Why are Utah gas prices so high? Next post