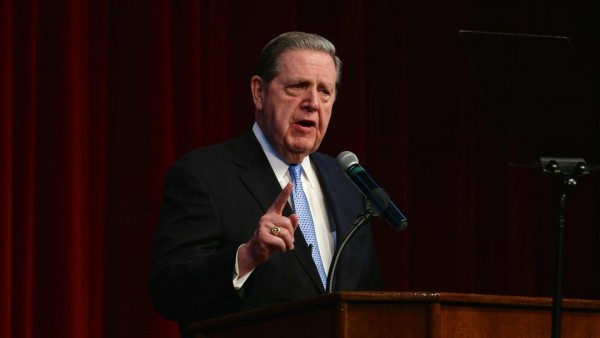 Elder Jeffrey R. Holland of the Quorum of the Twelve Apostles discusses the issues of faith, family and religious freedom on the campus of Chapman University February 26, 2015. (Photo courtesy Mormon Newsroom.)

The First Presidency, Quorum of the Twelve Apostles, and other leaders of The Church of Jesus Christ of Latter-day Saints have a lengthy list of responsibilities. Among the most important is the duty to testify of Jesus Christ as the Redeemer of the world.

That involves a lot of public speaking, and with so many addresses under their belts, Church leaders have learned how to give sincere, engaging, memorable talks. Here are a few things we can learn from Church leaders about how to give an excellent talk on a gospel topic.

1. Jump to the good stuff quickly

Public speaking can be awkward, and many people don’t know how to begin. A brief review of general conference addresses reveals that, in general, the best policy is to get straight to the point.

Speakers rarely introduce themselves, tell the story of how they were assigned to speak, or make jokes about how much they dislike speaking. In April 2007, Elder Dallin H. Oaks began his talk by stating simply, “I have felt impressed to to speak about divorce.”

In some instances, speakers in general conference go off their transcript to comment on something that happened previously, but those comments are always brief, followed by a strong opening. (Listen to, for example, Elder Jeffrey R. Holland, “Where Justice, Love, and Mercy Meet.”)

The Savior often taught in parables, which are stories with symbolic meaning that teach certain principles. Leaders of the Church often do the same. For example, President Dieter F. Uchtdorf used the story of the Potemkin Village in his 2015 address “On Being Genuine” to teach the importance of being authentic. Elder D. Todd Christofferson shared a story about a German Lutheran pastor who also taught the doctrine of the family in his address “Why Marriage, Why Family.”  These stories need not be personal, but they should be memorable and rich in meaning.

President Thomas S. Monson is well-known for using personal stories in his addresses, but these stories always serve to teach a principle. Personal examples are powerful tools because they allow the speaker to bear personal witness about things he or she has seen and heard.

Elder Russell M. Nelson’s teaching about the Sabbath day were made more powerful when he said:

“I first found delight in the Sabbath many years ago when, as a busy surgeon, I knew that the Sabbath became a day for personal healing. By the end of each week, my hands were sore from repeatedly scrubbing them with soap, water, and a bristle brush. I also needed a breather from the burden of a demanding profession. Sunday provided much-needed relief.”

Elder H. Brent Nielson’s address “Waiting for the Prodigal” is another powerful example of personal experience. A story about Elder Nielson and his family drives the narrative of the talk as he teaches about supporting family members who become less active.

As appropriate, speaking directly to your listeners and inviting them to engage in what you are saying can be a powerful teaching and testifying tool. Elder M. Russell Ballard invited special attention from young adults when he spoke in the priesthood session of the April 2015 general conference. In “The Greatest Generation of Young Adults,” he said:

“I would like those of you preparing to serve missions, those who have returned, and all of you young adults to spend a few minutes with me as though we were having a personal video chat right now. Please look at me for a few minutes as though you and I were the only ones in the room, wherever you are tonight.”

Sister Rosemary Wixom also invited audience participation when she asked all the women present to sing “Teach Me to Walk in the Light” together during her address “Keeping Covenants Protects Us, Prepares Us, and Empowers Us.” Inviting your audience to participate in your talk, literally or mentally, will help them remember what they learned.

No matter what the assigned topic is, everything in the Church should lead back to the gospel of Jesus Christ. Testify of Christ as the Savior of the World and of the reality of his Atonement. You may also appropriately tie your topic to the mission of Jesus Christ in this testimony.

For example, in his address on overcoming fear, Elder David A. Bednar said, “I love and revere the Lord. His power and peace are real. He is our Redeemer, and I witness He lives. And because of Him, our hearts need not be troubled or afraid (see John 14:27), and we will be blessed to hush our fears.”

Elder Robert D. Hales similarly testified of Christ’s relationship to religious freedom. He said: “I bear my special witness on this special Easter day that Jesus Christ used His agency to do our Father’s will. Of our Savior, we sing, ‘His precious blood he freely spilt; His life he freely gave.’ And because He did, we have the priceless opportunity ‘to choose liberty and eternal life’ through the power and blessings of His Atonement.”

Why are Utah gas prices so high? Previous post

7 suggestions for surviving your spouse's football addiction Next post