Home Sports BYU Tail as Old as Time: Unveiling the beginning of Cosmo the Cougar

Tail as Old as Time: Unveiling the beginning of Cosmo the Cougar 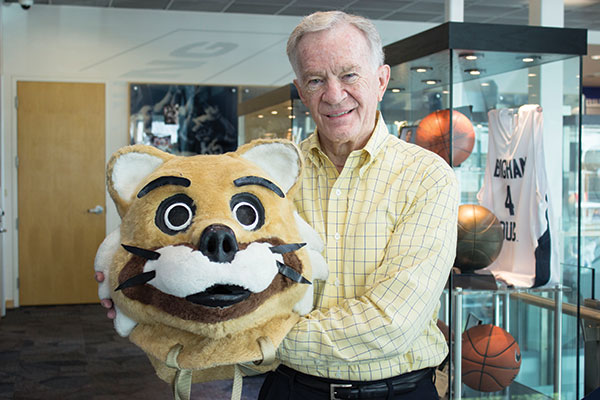 Henry Whiffen wore a Cosmo head similar to this one during his yearlong stint in the 1950s as the beloved BYU mascot. (Photo by Alisha Gallagher)

BYU fans say Cosmo is the coolest cat in town, and ESPN says he is the most athletic mascot in the nation. BYU Athletics says he’s all of that and a bag of chips because of a major suit upgrade 18 years ago.

But for his first 40 years, Cosmo couldn’t do any of that. In fact, he couldn’t even turn his head.

“I was basically limited to jumping, dancing and cheering,” says Henry Whiffen, who was Cosmo from 1956-57.

Henry was the third person to play Cosmo, the first being Daniel T. Gallego in 1953. Henry stumbled into the role when friends of the current Cosmo began having suspicions about the secretive role as BYU’s mascot. To keep friends off the trail and to keep the identity of Cosmo a secret, Clark Rogers (Henry’s roommate and Cosmo trainer) asked Henry if he wanted to be Cosmo No. 2 for the year.

Henry said yes, and a week later, he made his first appearance as Cosmo during an afternoon dance.

“The girls in the Knight Mangum dorm always had a ‘Mat Dance,’ or a matinée dance, in the basement of their dorm,” Henry says. “The Cosmo trainers had me go to the dance wearing a tux with the Cosmo head, paws and tail. The jitterbug was in its heyday, so I danced all afternoon.”

After that, Henry went to every other game (mostly basketball games) to cheer on the athletes and pump up the crowds. He high-fived kids, cheered with students and greeted elderly spectators. He couldn’t resist having a little fun with BYU couples, too.

“If a guy was there with an especially good-looking date, I sometimes teased and flirted with the girl,” Henry says. “Sometimes the guy would be proud of the attention, sometimes he would get miffed. But I embraced a humorous personality as Cosmo and really enjoyed it.”

“We put great effort into making Cosmo a character, not a person dressed up in a costume.”

Even with those simple interactions with the crowd, the early Cosmos ran into technical difficulties with the suit. It was bulky and restricted simple motions, making it impossible for Cosmo to turn his head.

That’s where the trainers came in. In the early days, Cosmo had two trainers who  helped conceal Cosmo’s identity. They would also assist Cosmo during the events.

“When I had that head on, I had no peripheral vision,” Henry says. “Kids would come and yank on the tail or fans of the other team would try and vandalize the suit, so my trainers, Peggy Herrin and Clark, stayed with me to protect me from being blindsided.”

Cosmo underwent “cosmotic surgery” in 1997, following a fictional fall from a cliff as described by the athletic department. Cosmo could not only see better, but he could also move easier.

“We hired one of the best mascot manufacturers in the country, and he brought clay moldings of what the head and body could look like,” says Brett Eden, former athletic marketing coordinator who worked on the new suit. “When we made suggestions, like bringing out the snout or tipping the head, he would adjust it right there so we could see it,” Brett says.

For Brett and the team that worked on the change, it was more than a suit upgrade. It was a character transformation. Different versions of the suit through the years had shown various human elements, like hands and eyes. Also, until 1997, Cosmo’s identity was revealed at the last sporting event.

With the upgrade, all of that went away. The suit covered the skin, the annual unveilings stopped and Cosmo became a seamless part of BYU life. The costumed Cougar became a character, not a human playing a mascot.

“We always thought it was important for Cosmo to be a character, not a person,” Brett says. “Cosmo is the mascot for the university, not just BYU athletics. He’s the personal touch for the BYU fans, because fans can’t interact with the president or the athletes. But they can and do interact with Cosmo as an important part of BYU.” 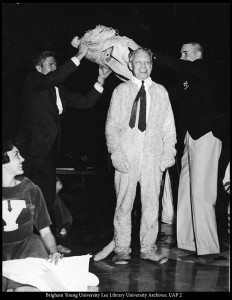 Unveiling Cosmo was a tradition until the suit upgrade in 1997. In 1960, Ernest L. Wilkinson, then-president of BYU, surprised students during Cosmo’s unveiling. The actual Cosmo that year was Daniel T. Gallego, who was also BYU’s first-ever Cosmo during 1953-54. (Photo courtesy BYU)

Keeping the Cat in the Bag

From the beginning, BYU Athletics and the Cosmo team have worked hard to keep Cosmo’s identity hush-hush. Today’s Cosmos even have to sign a two-page confidentiality agreement, promising that they will only tell their parents and spouse — and siblings, with discretion.

Maintaining secrecy was a key reason in acquiring the Cosmobile, too.

“The Cosmobile helps Cosmo get ready for the events in private,” says Brett Eden, former BYU athletic marketing coordinator. “You can’t have a BYU student walk into a grade school bathroom carrying a huge bag and walk out a mascot. That destroys the character.”

Henry Whiffen, who was Cosmo from 1956-57, also worked hard to keep his identity a secret. Since Henry participated in boxing intramurals, he chose the boxing room in the Smith Fieldhouse as his transformation station.

“I knew it wouldn’t raise any flags for people seeing me go in and out of the boxing room on game nights,” Henry says. “A trainer or fellow Cosmo Team member would cover up the window to the room, and I would put on the Cosmo suit there. I was never caught.”

Henry didn’t have to sign a confidentiality agreement, but he knew that if he leaked the news, he would be off the team. So he stayed quiet.

“I decided I would rather stay Cosmo than get attention from sharing the secret,” Henry says. “And fame wasn’t why I did it. I did it for the adventure. It was a fun secret to have.”