Home LDS Being LDS Of fleas and faith: Encouraging words from Elder Scott to a discouraged young missionary

Of fleas and faith: Encouraging words from Elder Scott to a discouraged young missionary 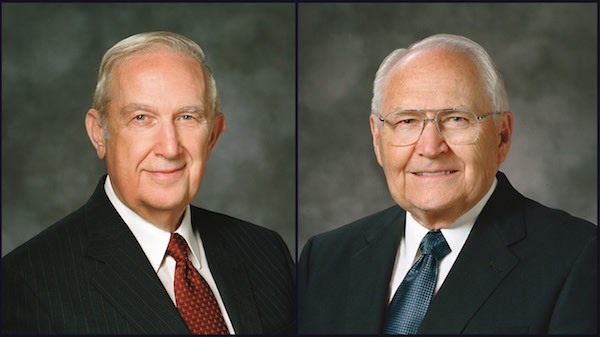 In recent months, three beloved apostles of The Church of Jesus Christ of Latter-day Saints have passed away. That reality will really hit home the first weekend of October for general conference, as Elder L. Tom Perry, Elder Boyd K. Packer and Elder Richard G. Scott will be conspicuously absent.

I’ve been strengthened by the inspired words, and the examples, of those men.

I once interviewed Elder Packer about living in Lindon, his family and his many hobbies. He was gracious and it was a delight to talk to him.

I met Elder Perry and Elder Scott early in my mission and I have boundless gratitude for the help they gave me at a critical time of my life.

I had been in the South American country of Chile for only two weeks as a new missionary, and I was homesick and overwhelmed. I was serving in a remote town, learning to eat new kinds of food, and following around my native companion like a puppy dog. Speaking of dogs, the town I was serving in was full of stray ones and they seemed to be everywhere.

I was battling a constant headache from trying to understand the people speaking the Chilean-version of Spanish at 100 miles an hour. The place we lived was so small, we had to go outside to sweat. On top of that, I because of the proliferation of dogs, I was literally being eaten alive by fleas.

Fleas are rampant in Chile, and they must enjoy the taste of imported, North American blood, because they feasted on me every night while I slept, producing dozens of large, red welts all over the inside of both arms. It was rather grotesque, but it did get us into a few doors of sympathetic people. Every morning, I’d wake up to bloodstains on my sheets.

[pullquote]The Chileans would laugh when they would see my plight and explain that the fleas loved my “imported” blood.[/pullquote]

The Chileans would laugh when they would see my plight and explain that the fleas loved my “imported” blood.

One night, my companion and I taught a discussion to a group of people in a room filled with thick cigarette smoke, making it hard for me to breathe. When I taught a portion of the discussion, the unreceptive investigators, I think, asked if I came with subtitles. They kept saying they didn’t understand me.

My companion and I awoke early the next morning to take a bus to a mission conference. I was excited when I found out that Elder Perry and Elder Scott were in attendance, because I was feeling a little discouraged at that time. I wasn’t sure I’d be able to survive for two years as a missionary.

Before the conference started, Elder Perry and Elder Scott stood outside the chapel and greeted each missionary individually. When I reached the front of the line, I remember them looking me in the eyes, then calling me by name — having read my nametag. Elder Scott greeted me with his booming voice and infectious smile. How could you not feel good after that? He made me feel like the best missionary that ever lived.

Then Elder Scott asked me how long I had been in the mission field. “Two weeks,” I told him.

“How are you doing, Elder?” he asked.

I pulled back the sleeves of my suit coat, revealing my countless flea bites. It must have looked like I had leprosy.

Elder Scott, who had spent a lot of time in South America as a missionary, mission president and Church leader, suggested a remedy. Then, he told me, “Things will get better, Elder.”

That statement, as well as the powerful messages delivered in that mission conference by Elder Scott and Elder Perry that day, buoyed my spirits at a time when I desperately needed to be comforted and edified. Elder Scott’s words helped me to understand that the Savior was aware of my situation and that I only needed to trust in Him. Elder Perry’s words filled me with enthusiasm for the Lord’s work and reminded me that with His help, I could accomplish anything.

As it turned out, those flea bites did heal. Eventually, I built up an immunity to flea bites. I learned to both speak and understand Spanish, and people finally understood me when I taught them the gospel. I learned to enjoy the food. My mission did get much, much better.

In fact, that meeting was a turning point in my mission.

The words of living apostles taught me an important lesson about the Atonement. They showed the way that I could be healed by urging me to exercise faith and continue working hard.

I remember as I left that meeting and returned to my assigned area, I was practically floating on air. I was filled with faith and hope. As I applied their counsel, I was blessed. I carried their words and their love with me throughout the rest of my mission.