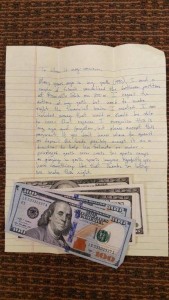 Orem city received a letter containing $500 and an apology for vandalizing a park 25 years ago. (Photo courtesy Orem city)

It’s taken 25 years, but a former Orem resident is trying to make amends for damage he did to a park bathroom.

On Monday the city got an anonymous letter containing an apology and $500.

“Many years ago in my youth (1990), I and a couple of friends vandalized the bathroom partitions at Bonneville Park on 800 West,” the letter reads. “I regret the actions of my youth but need to make right the financial burden I created. I am including money that would or should be able to cover that expense. I recognize this is long ago and forgotten, but please accept this payment. If you don’t know where to spend or deposit the funds possibly accept it as a donation to help less-fortunate or under-privileged youth cover costs for sports camps or playing in the youth sports leagues. Hopefully you have something like that. Thanks for letting me make this right.”

Reed Price, maintenance division manager for the city’s public works department — the first to read the letter — said he was touched by the sentiment. “I hope they feel peace for making the proper amends.”

Orem has exactly the place for the donation — its all-abilities playground.

“We’ll use the money as the first contribution to the all-abilities playground,” said Reed Price, maintenance division manager for the city’s public works department.

The city approved $150,000 to build the playground at the City Center Park, near the Orem Library. It will replace the current playground with the all-abilities equipment and upgrade the restrooms. The city hopes to have the playground built in April or May 2016.

Orem likely will do a community build on the project because it’s had so much volunteer interest, city spokesman Steven Downs has said. That means the city will contract with a company experienced with community builds to oversee the volunteer effort and ensure building codes and safety requirements are met. And it means the city can put more money into equipment instead of construction.