A trip to Italy in downtown Provo 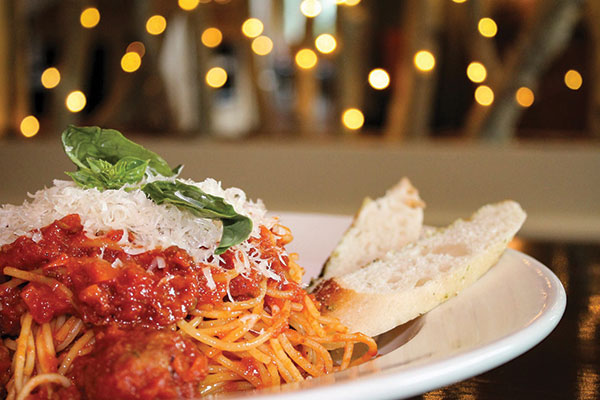 Mondays are spaghetti night at Oregano Italian Kitchen in downtown Provo, where the traditional recipe is served all-you-can-eat.

When I first came to Provo in 1972 to attend BYU, I fell in love with downtown Provo and its quaint hardware store, shoe repair, fabric store, and of course, the night-life hot spot: JIMBA’S!

Over the years, downtown became vacant as businesses exited to malls and shopping centers. Provo has made a commitment to revitalize downtown, and it now has all the personality and diversity of a great urban chic neighborhood.

Downtown Provo has a plethora of great restaurants including some of my favorite hang outs: The Black Sheep and Communal. I always say if you want to open a successful restaurant, do it next to another successful restaurant — and that’s just what Oregano has done. Oregano is Provo’s newest Italian restaurant featuring the dining creations of Chef Chad Pritchard who also owns The Chef’s Table in Orem. The Chef’s Table is a fine dining establishment, but Oregano caters to the more casual diner in a traditional Italian dining room of red-checked table cloths.

As a mother and grandmother, I am always looking for places where I can have good food and still be comfortable taking six grandchildren. Oregano’s has a comfortable atmosphere with a nice menu for the “little bambinos”! The kids loved the spaghetti and meatballs, macaroni and cheese, and the pizza. Even the adults thought the mandolin vegetables on the children’s plate were the best thing going.

Next time, I’m going to order those fabulous vegetables with the homemade marinara.

The house-made Italian sausage is the perfect blend of pork and chicken with a nice finish of fennel. The gnocchi had an amazing sauce but the dumplings themselves were tough and heavy. There are also a few kinks to work out on the Risotto and Eggplant Parmigiana, but I am sure Chef Chad will be in his stride soon. And the surprise at the end? They give you a choice of either alfredo or marinara pasta to take home and enjoy the next day. My husband loves that!

As always, supporting local food and local restaurants is at the top of my list. Here’s to another successful food venture in downtown Provo. Until next time, remember to fill your life with scrumptious food and joy.

6 ways to help kids develop a musical ear Next post