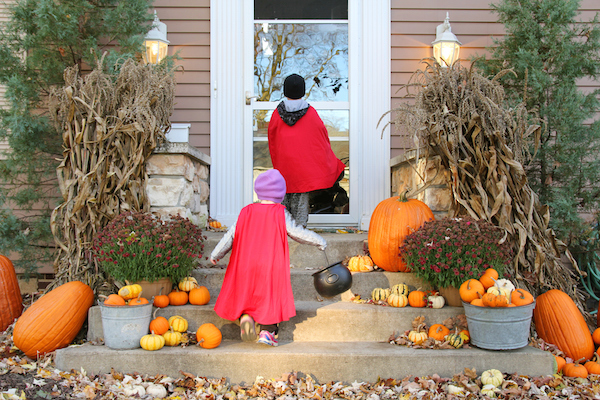 Here’s a holiday fact that’s really scary: Children are more than twice as likely to be hit by a car and killed on Halloween than on any other day of the year, according to the Washington, D.C.-based organization Safe Kids Worldwide.

To keep your little ghosts and goblins safe this spooky season, follow this advice from Lieutenant Brandon Post, public information officer for the Provo Police Department, and Cambree Applegate, Safe Kids Utah coordinator for the Utah Department of Health:

During peak hours of 5:30 to 9:30 p.m., things tend to get “chaotic,” says Applegate. “Be on the alert for excited children, who may dart into traffic due to masks that obscure their vision,” adds Post. “Drive below the posted speed limits in residential areas, and do not pass vehicles that have stopped in the road. Pull off the road to safety and turn on your emergency flashers when dropping off or picking up trick-or-treaters.”

2. Put your mobile devices away.

Don’t talk or text while driving — focus all of your attention on the road. And stay off your mobile devices as a pedestrian as well, says Applegate. She says to keep your head up and make eye contact with drivers as you cross the street. And use crosswalks whenever possible.

“While a ninja in an all-black gi makes for a very cool costume, make sure your children are visible,” says Post. Costumes should have a bright color somewhere, or have reflective strips or material. Each group of trick-or-treaters should have at least one flashlight. You can also wear or carry glow sticks and put reflective strips on trick-or-treat bags for extra visibility.

4. Check that masks and costumes won’t obstruct vision or movement.

Applegate recommends using non-toxic face paint or makeup instead of a mask, when possible.

5. Walk the block during peak hours.

“Short, occasional walks outside during peak trick-or-treat times can discourage speeding motorists, vandalism and crimes against children,” says Post. He says to report any suspicious or criminal activity immediately by calling your local police department, or, in an emergency, 911.

“Several days before trick-or-treating, check the sex offender registry at corrections.utah.gov,” says Post. “If there are any registered sex offenders living in your area, make sure your children avoid those homes.”

7. Plan a route with older children.

Applegate recommends that children be at least 12 before trick-or-treating alone. “If your children are old enough to trick-or-treat alone, plan and review a route with them before they leave,” says Post, of the Provo Police Department. “Encourage children to go out in a group and have them check in at set times, either by phone or by stopping by home.”

“Look in all directions before crossing the street, never cross between parked cars, and obey all traffic signals,” says Post. “Walk, never run, across the street, and use sidewalks, not the street, for walking.”

Teach your children not to take shortcuts through fields or backyards, and to stay in well-lit areas with lots of people, says Post. Only trick-or-treat at homes with a porch light or some other outside lighting. Tell children that “if invited inside, never go into a stranger’s house or car. If a stranger tries to make you go somewhere, scream as loudly as possible and run to safety as quickly as you can,” he says.

An adult should inspect candy for signs of tampering before it’s eaten, says Applegate. Treats should be eaten from their original and unopened wrappers. And don’t take anything homemade from someone you don’t know, adds Applegate.