Traffic on SR 92 in Lehi will get worse before better 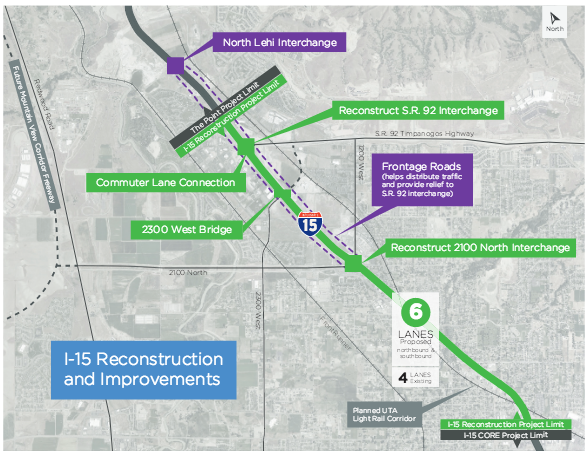 The four miles of I-15 reconstruction is estimated to cost about $450 million. (Image courtesy UDOT)

Attention Lehi residents and anyone who drives on SR 92 in the city: It probably will be five years before there are any traffic improvements in the area. City leaders know traffic is a major concern, especially with all the new development. But that’s not a city road, so Lehi can’t make changes to improve it.

“We have been meeting with UDOT for up to two years, working on creating a transportation plan for that area, including some significant infrastructure improvements along I-15, redesign of the exit and creating additional traffic options for east to west,” said Cameron Boyle, Lehi spokesman. Those plans include extending Triumph Boulevard over I-15, near the new hospital.

But that’s years away. And construction in the area, called the Lehi Technology Corridor, is booming and adding cars to the congested road:

When Lehi made a Facebook post last week about the new buildings, commenters weren’t excited — they were concerned about traffic and water.

“Yikes!! It’s already such a mess through there with traffic. I sure hope there’s a transportation plan to go along with all these new buildings,” one commenter wrote.

Another said: “You’ve really got to figure out another way to let residents get from one side of the freeway to the other. Both sides of SR-92 are already packed, with the west side completely overloaded. It makes living here miserable.”

Lehi’s concerned too. “We recognize the significant need in the area,” Boyle said. “We’ve been working tirelessly to get them to bump it up if at all possible. Obviously with the traffic concerns in the area it could slow economic growth.

“We feel like … it needs to happen soon if not yesterday.”

The challenge in getting the project pushed up is that the state Legislature needs to look at needs of the whole state, and projects in other areas have been prioritized over Lehi, he said.

“We’re trying to express how important this is to happen now.”

The city has hesitated posting information about the project because it’s only in the beginning planning stages but will do its best to communicate information to the public, Boyle said.

The project, at a cost of $450 million, includes reconstructing 4 miles of I-15 through Lehi, replacing 13 bridges, reconstructing the SR 92 interchange, building the Triumph Boulevard bridge and more. Construction would begin 2020 and would be finished in 2021.

As for water concerns in the area, Boyle said Lehi requires developers to bring water shares to the city for projects. Lehi had to implement water conservation measures this year, but that was because of the dry winter not new developments.

Dustin Christensen 'knocked out' of 'The Voice' Previous post