What the Cougar Tipoff showed us about the BYU basketball team 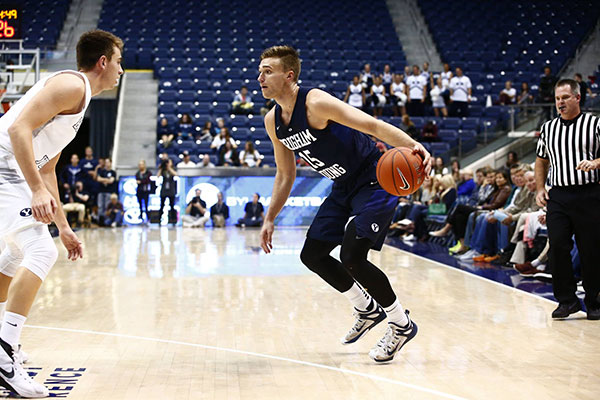 BYU basketball might finally have some depth this season.

In a telling game, the seasoned Blue team beat the inexperienced White team 66–60 at the annual Papa John’s Cougar Tipoff Wednesday night at the Marriott Center. However, it was the White team, which had a total of 28 games of BYU game experience amongst the players, that came out hot-handed in the first half.

Here are four insights that answer some of the bigger questions Cougar basketball fans had going into the Cougar Tipoff.

Will BYU’s defense be better this year? The jury is still out.

The seasoned Blue team still struggled on defense, especially in the first half. Senior Nate Austin was quick to pick up two fouls when he came in the first half and Kyle Davis had four fouls before halftime.

However, the White team, which came out energized and started strong, forced 9 turnovers in the first half. Maybe the fresh blood on the court will help the Cougar defense, but it will take playing a few other teams (not their teammates) to see if the Cougars have really made progress.

For the last few seasons, BYU’s bench only stretched to about two dependable players. This season Rose hinted that fans will see some of the young faces regularly having playing time.

“I think you see in freshmen — especially these two kids (Nick Emery and Zac Seljaas) tonight — they have flashes of really good play. Some days are really awesome and the next couple of days they struggle a little bit,” Rose said. “That’ll be the key for us, to find the consistent young guys who can actually help us. … The White team turned it over quite a bit, but I like those young guys. I think that we’re going to have to find a whole group of them that are going to have to play consistent minutes for us.”

[pullquote]”It’s not really about age right now. Spain helped us get our jitters out and now it’s time to play as a team. Scoring is all that matters during the game. It doesn’t matter who the scorer is or not. It’s how we play as a team.” —Zac Seljaas, BYU freshman[/pullquote]

“It’s not really about age right now,” Seljaas said. “Spain helped us get our jitters out and now it’s time to play as a team. Scoring is all that matters during the game. It doesn’t matter who the scorer is or not. It’s how we play as a team.”

Rose said in designing the Blue and White teams for Cougar Tipoff he split the teams so that the posts would get a large amount of playing time, adding to their experience.

“I wanted Braiden (Shaw) and Jakob (Hartsock) to play a lot of mintues tonight,” Rose said. … “It forces everyone to keep them on the floor. I think both of them fouled out, but I thought that they had some real flashes. Braiden had some really aggressive plays early in the game and Jakob hit a few jump shots. We’re trying to build that whole group. We knew we weren’t going to play Nate all that much. Nate’s the guy we’re trying to monitor a little bit just to get to the season and then hopefully we can get him to be really aggressive from Nov. 13 to April 1.”

On the White team, freshmen Shaw and Hartsock both snagged 4 rebounds and 6 and 8 points, respectively.

“Kyle’s a big body. I think we’ve been lacking that the past few years,” Emery said. “He’s able to score the ball too. I also think he’s an under-rated rebounder. If a shot is missed, he’s always getting a tip on the ball, which is huge, because it flows right into our offense.”

The point is there actually was a post presence — something BYU’s team was lacking the past year.

It’s way too soon to be looking at the 2016–17 season, but sophomore Elijah Bryant’s presence as point guard is a reason to get excited for the future. Bryant was second in scoring for the White team with 14 points, attacking the basket and taking perimeter shots. Unfortunately, Bryant isn’t eligible to play until next year; this year he is redshirting due to NCAA transfer rules. While the focus is obviously on the current team with senior Kyle Collinsworth leading the team, Cougar fans can heave a sigh of relief knowing Rose has some talent waiting in the corner for the future. Collinsworth won’t be playing in Friday’s exhibition game because of tendinitis in his left knee, which is not the knee he had surgery on.

The Cougars face Arizona Christian in their first exhibition game at the Marriott Center on Friday at 7:30 p.m. The game will be televised on BYUtv and can be heard on the Cougar IMG Sports Network, KSL 1160 AM and 102.7 FM, BYU Radio and Sirius XM 143.