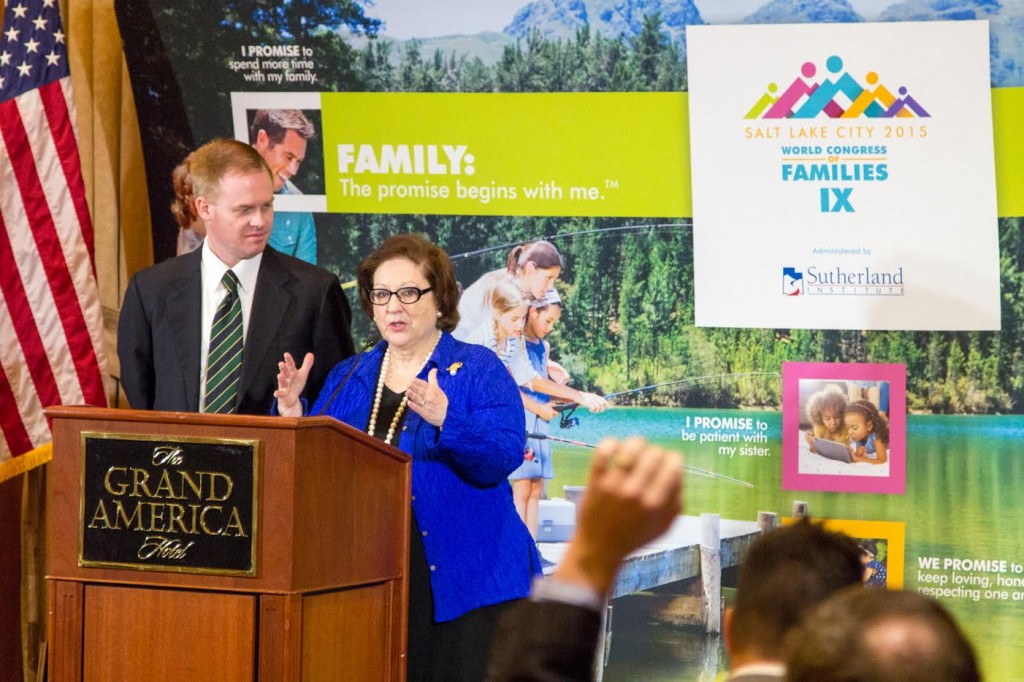 Family advocates from around the globe convened in Salt Lake City this week for the first World Congress of Families held on American soil.

Throughout the week, speakers and sessions of the World Congress of Families IX focused on a slew of family-focused topics, from abortion to economics and delayed marriage trends to religious decline.

“What we’re trying to do is not to belabor problems but to say, what can you do about them?” said Stan Swim, chairman of the World Congress of Families IX and interim president of the Sutherland Institute, which hosted the conference at The Grand America. “We have to look forward, and whatever we’ve got, let’s build on them and try to improve things for families.”

Here are 10 ways to defend the family as proposed by speakers at the World Congress of Families IX.

1. Gather all the support we can to strengthen and protect faith, family and freedom.

Elder M. Russell Ballard, a member of the Quorum of the Twelve Apostles of The Church of Jesus Christ of Latter-day Saints, encouraged attendees to stand up fearlessly in defending the family, joining with other faiths and advocacy groups — while still extending the hand of fellowship to those with whom we disagree.

“By engaging in compromise and extending love to all God’s children, who are our brothers and sisters, we can create a peaceful, diverse tapestry of ideals and beliefs,” Ballard said. “Remember, married or single, that, in the end, we are each a unique part of God’s grand plan.”

2. Teach a child’s heart before you focus on its head.

Marlene Peterson, founder and president of Libraries of Hope, said the shift in childhood education toward the intellect stemmed from those who dreamed that the world could be governed by reason. Emotions develop before the intellect, however, making a child’s first eight years a critical time to fill hearts with impressions, feelings and images.

“It is a great mistake to attempt to train intellect of a child before we have attempted to train his heart,” Peterson said. “Our world will only be brought back into balance when we put heart and mind back into proper order.”

[pullquote]“It is a great mistake to attempt to train intellect of a child before we have attempted to train his heart.” —Marlene Peterson, founder and president of Libraries of Hope[/pullquote]

Peterson emphasized the importance of teaching children with art, music and stories — methods that connect emotionally and will fill children’s hearts with that which is good, beautiful and true. Doing so will not only improve the quality of children’s lives but change the quality of the world, she said.

“Don’t underestimate the power of a story,” Peterson said.

3. Bring back a focus on work, education and family.

Kansas Governor Sam Brownback shared how President Lyndon B. Johnson’s “Great Society” program led to a broken family structure and generational poverty in Brownback’s home county of Linn, Kansas, without actually reducing poverty. The societal experiment, he said, forgot about work, education and family structure — and those are things we can cure.

“America is constantly reinventing itself,” he said. “We need to do so lovingly, caringly, but we’ve got to engage.”

4. Push back on forces attacking the God-ordained, God-constructed family model.

Samuel Rodriguez, Jr., president of the National Hispanic Christian Leadership Conference, said the family model defined by God serves as an essential firewall against many social ills, including multigenerational poverty, multigenerational government dependency, drug abuse, teenaged pregnancy and social disparity. An attack on the family is an attack on the groups that need the family’s stabilizing power the most, and those groups need family advocates to help them fight back.

“Today’s complacency is tomorrow’s captivity,” Rodriguez said. “Within my context, there is no such thing as comfortable Christianity, and truth must never be sacrificed on the altar of cultural, political or sexual convenience.”

5. Embrace piety and chastity as foundational to society.

Pat Fagan, director of the Marriage and Religion Research Institute (MARRI), explained that worship impacts chastity, chastity impacts marriage, marriage impacts many other things that impact society as a whole. He shared numerous statistics available on MARRIpedia.org that showed the social benefits of an “always intact” family — meaning a married mother and father raising children resulting from their union — that worships weekly, including that weekly worship delivered the same increase in inner-city children’s probability of receiving an education as moving them out to the suburbs.

“Worship trumps, I think, everything else in the social science that can deliver this except maybe marriage,” Fagan said. “Worship and marriage together … give the knockout punch.”

Fagan said it’s no surprise that among sexually active Americans, those who are in an always intact family who worship God weekly feel the most satisfied, loved, wanted, needed, taken care of, thrilled and excited.

“A thriving society needs a culture of chastity — a joyful chastity,” Fagan said.

6. Stand up to the changes pushed within the courts.

Brian Brown, president of the National Organization for Marriage, urged attendees to affirm truth about benefits and power of the traditional family, reject the Supreme Court decision to redefine marriage, overturn the decision and contain the damage that will stem from the decision. Brown warned that when we change law, we change culture.

“Politics is not downstream from culture,” Brown said. “There’s a dialectic.”

7. Seek to grow up through a marriage, not to merely grow old.

Wendy Ulrich, author, psychologist and former president of the Association of Mormon Counselors and Psychologists, said she wondered how it is that those in stable relationships fail to communicate to the next generation what can be soul-satisfying about it. She said there’s more to marriage than making it last.

Successful marriages run the course past the initial honeymoon phase through a power struggle (problem-solving through the spouse’s quirks and flaws with compassion), distancing stage (realizing magic can come from two ordinary people working together), and a stage of acceptance and renewal (becoming trustworthy with someone else’s heart instead of seeking their own safety first). She said the happiest people are those who are the most realistic about flaws in the long run.

“Love is worth the risk, whether or not we succeed,” Ulrich said.

8. Shine the light on truth from a place of love.

Peggy Hartshorn of Heartbeat International and John-Henry Westen of Canada’s LifeSiteNews outlined the gritty, hard reality of abortion’s harm beyond killing babies, including taking away normal security and bonding in key familial relationships and disconnecting sexual intimacy from its foundation. Westen said he broadcasts these realities because he loves people and wants to spare them from the emotional devastation that accompanies abortion.

Hartshorn shared statistics that give hope to a changing societal trend away from abortion, including that “life-affirming clinics” now outnumber abortion clinics four to one.

“There is hope for life and rebuilding the family,” Hartshorn said.

[pullquote]“Hard science is like a weapon of mass destruction. Let’s use it.” —Miriam Grossman, representative of Center for Medical Integrity in Intimacy Education[/pullquote]

9. Recognize and leverage scientific studies that promote the traditional family.

Miriam Grossman of the Center for Medical Integrity in Intimacy Education said that science is pro-family, and regardless of a Supreme Court decision, eternal truths like gender differences and the uniqueness of a male-female union will stand. According to Grossman, science says it’s impossible to transform a man into a woman or a woman into a man.

“Hard science is like a weapon of mass destruction,” she said. “Let’s use it.”

10. Speak up and share your story to empower others.

Jennifer Roback Morse, president of the Ruth Institute, said the sexual revolution damaged the traditional family through divorce and unwed parents. She encouraged victims to become survivors, advocates and champions who can speak about the pain of divorce and broken homes from personal experience.

Each time we speak out, we make it easier for others, she said.

“We need to make a second career about speaking the truth about our experiences,” Roback Morse said. “We’re all dealing with an intense legacy of lies told publicly and repeatedly.”