Home Featured Jack of All Stats: Pleasant Grove native is a sports statistician and a raving fan of Utah Valley

Jack of All Stats: Pleasant Grove native is a sports statistician and a raving fan of Utah Valley 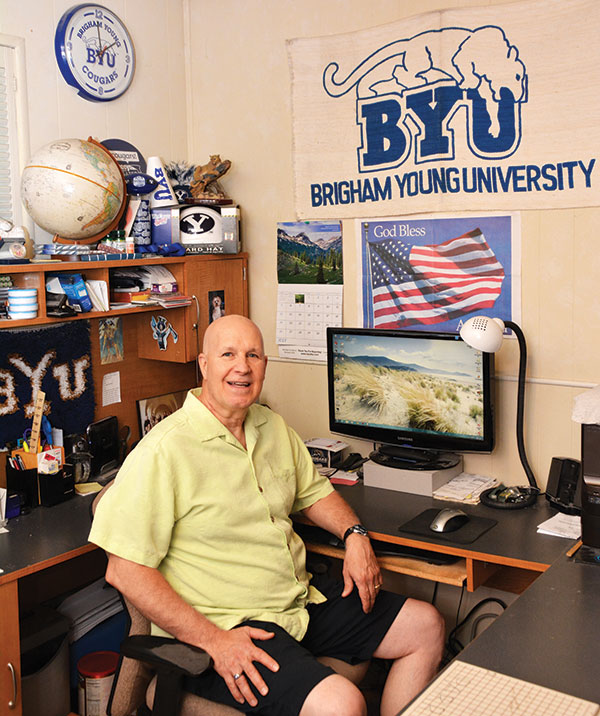 With the exception of a stint in Las Vegas and an adventure in Japan, Noland Parry is a lifelong Utah Valley resident. He loves a good game and a good meal, especially if it’s from Chubby’s in Pleasant Grove. “If you haven’t been there yet you are missing out!” he says.

I graduated from Pleasant Grove High School and have lived in Utah Valley most of my life. I attended BYU for a year before my LDS mission to Puerto Rico. After that, I met my wife, Nancy. I called her on a Tuesday to ask her out for the following Saturday. She agreed and then I started thinking, “Why are we waiting all the way until Saturday?” So I called her back up and said, “How about I come get you tomorrow?” We went to Trafalga the next day. Three months later we were married!

I took a job with the Air Force and we moved to Las Vegas. I worked as a travel agent for the military, in the reservations center and at the air terminal ticket counter. We loved our time there. To this day I think it was one of the best LDS wards we have ever been a part of.

When it was time for a transfer, I was asked to choose four locations we would be willing to move. We put Japan on our list, and before we knew it we were headed to live in a foreign country.

It was an adventure in so many ways, especially because we didn’t speak Japanese and we had two children, ages 4 and 2. Every Sunday after church, my wife and I would pick a different road to drive down and see where it led.

After 3.5 years in Japan, we returned to Utah. My wife had our third child and I found a job in the computer industry. I continued to work with computers in different capacities over the years, from software support to testing to inventory control.

After being laid off, I began caring for my dad full-time. He suffers from dementia and I spend my days helping him.

One of my lifelong passions is sports. In high school I was the manager of the basketball and football teams. At BYU, during the Frank Arnold era, I was one of the basketball team’s managers. I got to travel with the team and I loved being around college-level sports.

Since 1981, I’ve been doing a guide to high school and college sports called “Parry’s Power Guide.” I created a specific formula to rank sports teams, and when one team plays another, my guide shows which is favored to win. My guide has been featured in the Deseret News and Daily Herald. I have also licensed it in other states including Oregon, Idaho, Nevada, Texas and Hawaii. I do a guide for Gaming Today newspaper in Las Vegas.

I’ve always loved analyzing sports statistics. I did it as a kid before I even realized what I was doing. It keeps me busy and up to date on local sports, which I love.

My three children, all of whom are married, live close and they are my biggest blessings. As they grew up, we spent a lot of time at BYU attending basketball and football games. Today, we get together every Sunday for dinner — and the highlight is our seven grandkids.

Another one of my greatest joys in life is my wife. Our love for each other and our testimonies of the gospel have been key. I always tell people she is the better half of the bargain. We’ve had hard times, but she is there for me and we’ve always found a way to push through it.