Day in the Life of a ‘Saturday’s Warrior’ extra 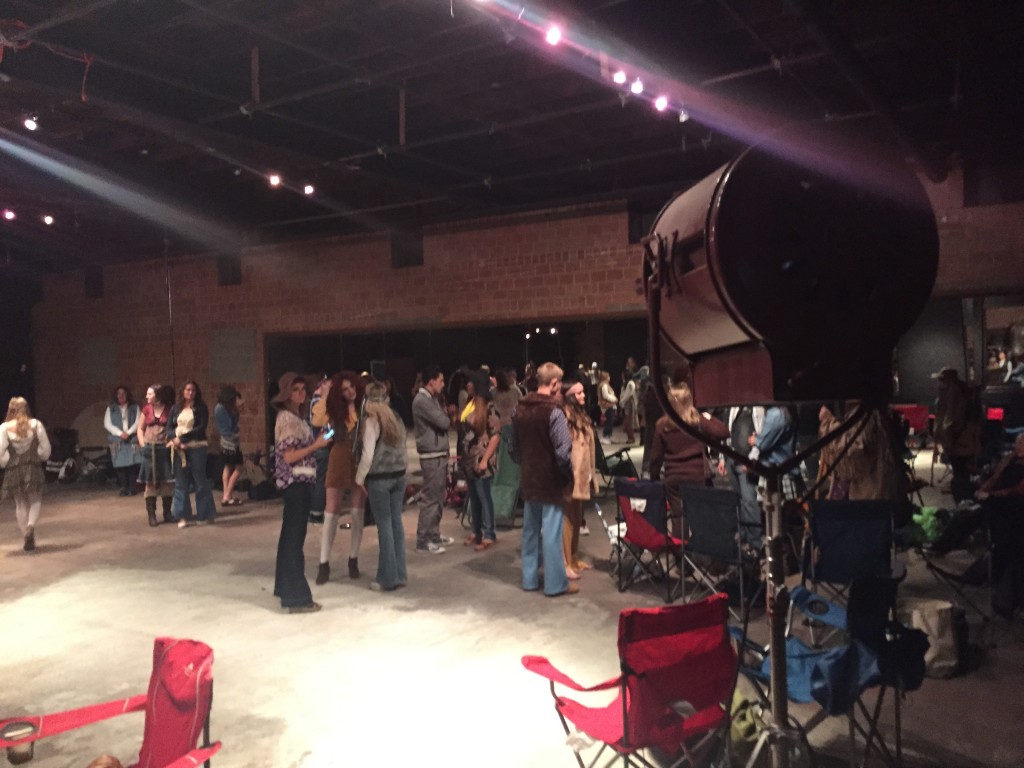 Extras for “Saturday’s Warrior” signed up for an unpaid, potentially-12 hour shift. On the day Jeanette Bennett was an extra, the group spent most of the day waiting in a backstage area of the downtown Salt Lake location.

I spent my 41st birthday dressed as a 1970s concert-goer on the set of “Saturday’s Warrior.” In other words, it was the most memorable birthday of all time — line upon line.

Dressing in the style of my birth year (1974) and watching the cameras capture the newest version of my childhood soundtrack almost made me want to give up this writing gig and build a new career in front of the camera.

It was actual my writing tasks that kept my mind and my laptop occupied throughout the day where we spent more time waiting than we did “acting.”

In fact, they fed us lunch before we had earned our keep on the indoor set in downtown Salt Lake City. The email told us to come early where (fingers crossed) we would find a parking spot under the overpass. We were to be dressed in hippy outfits so the wardrobe crew could quickly adjust our looks and send us on our way for our potentially 12-hour shift as extras.

After I found the last spot under the overpass (which I later learned was in the bird “hangout” spot), I wheeled my suitcase over to the wardrobe area so I could show them what I wore and the items I brought as backups. The coordinator quickly approved my shirt and hair/headband but wanted to cover my white skirt with a long tie-dyed beauty. “That white skirt will grab too much attention from the camera,” she told me. 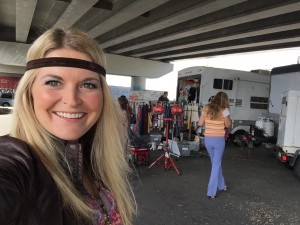 Utah Valley Magazine Editor Jeanette Bennett spent a day on the set of “Saturday’s Warrior” to celebrate her 41st birthday.

Fair enough. I wheeled my suitcase of extra denim jackets back to my car, which was already covered in bird poop.

Then I hauled my camp chair and purse inside to meet my castmates for the day. We all got settled in by swapping names and previous “extra” experiences. My new friends ranged from nervous first-timers to a man who said he’d been in 39 movies and came to “Saturday’s Warrior” under the incorrect impression that we were getting paid.

From 10 a.m. to noon, we watched the main actors wave to us a couple times as they walked through our dimly lit backstage area. At one point, the director had us all stand so he could gauge the height-range of his insta-cast. Around noon, a large dutch oven was brought in full of pasta and we each dished a portion onto a paper plate. One of my new “extra” friends writes a healthy living blog, and she took a few bites and said, “This is what I teach people not to eat. I bet they are feeding the main actors salad and vegetables.”

I wasn’t expecting to be fed so I considered lunch a delicious bonus.

By mid-afternoon, the directors were ready for the extras to come into the “concert hall” where we faced into a green screen and pretended to cheer for a live band. They wanted to turn 40 extras into a concert crowd of hundreds. So we cheered, jumped, pumped our arms … and then moved back five feet, rotated the order of who we stood next to, and then cheered into the green screen again. A couple hours later, they had captured our crowd enough times throughout the room to piece together a large crowd scene in the editing process.

By late afternoon, the band of lead actors came onto the concert stage with instruments, and the extras were asked to crowd the stage and cheer to real music this time. As the crew was setting lights and practicing with the fog machine, the actor playing Jimmy (real-life heartthrob Kenny Holland) caught grapes in his mouth being thrown from one of the assistants. He made conversation with the extras in the front row. “The back row? Who needs ‘em?” he joked. The actress in the band started singing part of “All I Ask Of You” into her mic.

Eventually, the fog, lights and mics were all set — and the youngest, most attractive extras were positioned in front of the band (I was second row, off to the side.) Now it was “go time”! 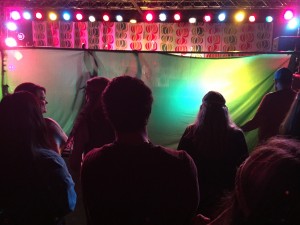 The directors of “Saturday’s Warrior” had the 40 extras cheer in front of a green screen, which will later turn into a full-blown concert scene.

We saw Jimmy start to sing “Zero Population” with his band, only to pull the cord on his electric guitar and say he couldn’t sing the lyrics anymore. He told the crowd and his bandmates that he loved his big family and could no longer sing words he didn’t believe. The directors wanted this plot climax shot perfectly, so we reacted to this scene about 13 times before the directors felt everything came together — without an airplane flying overhead (I never realized how often a plane lands at the nearby Salt Lake Airport).

During Jimmy’s emotional “quit the band” scene, the extras were asked to sporadically “boo” — except for the front row. “Nobody boo in the front row,” the director adjusted his instructions after about five takes.

At 5:30 p.m., this concert scene was “a wrap.” The directors asked us extras to come to the back and look at a series of still shots they had grabbed from their footage. If we saw our face in their photos, we were done for the day. If they hadn’t captured our face, they wanted us to stay for a smaller concert scene at the other end of the set. I immediately saw my headband and blue-eyeshadow in one of the pics, so I grabbed my laptop, said goodbye to my new-found friends and headed to my car under the overpass. My career as an extra had come to an end.

When the movie comes out in April, my concert cheering face may or may not be part of the film. But the film is now part of me … and my day on the set was the perfect birthday present to my 41-year-old self.

Every game is 'huge' this season for BYU, including against UVU Next post