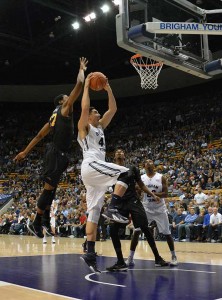 BYU center Corbin Kaufusi takes the ball to the basket in a game last season. (Photo by Rebecca Lane)

In the first two games of the season, the BYU basketball team has had a total of 42 turnovers that according to BYU head coach Dave Rose come from “silly” mistakes — something Rose says needs to stop.

“We need to start really getting better and being a more cohesive team the way we execute,” Rose said. “And then offensively the most important thing right now is to take care of the ball. If you take the 42 turnovers in two games and if you cut them in half, that gives us 21 shots and we rebound pretty good.”

Part of the problem, Rose notes, is the younger team members are losing their composure in the high pressure situations. With six freshmen and five sophomores making up the roster, most of the players on the court have no-to-little college experience. Plus, Rose is making some offensive changes this season in getting the post players more involved.

“This team is kind of a work in progress right now, not only in trying to find the right combination, but the flow,” Rose said. “We’re been a really fast-paced team over the years and been really guard oriented. I think our post players this year deserve some real attention, so hopefully we can get that thing inside and play a little more inside-out than we have.”

[pullquote]”Now people are healthy and they’re trying to get thrown back in the mix. With all that going and the pressure, it’s thrown off some of us, but as long as we keep practicing hard and staying healthy the cohesion will get there.” —Jamaal Aytes, BYU sophomore forward[/pullquote]

On Monday night’s ESPN Tipoff loss to Long Beach State, two of Rose’s “bright spots” were forwards Corbin Kaufusi and Jamaal Aytes. Kaufusi led the team with 17 points and 10 rebounds, his first double-double at BYU. Aytes, who was returning from an ankle injury, added 8 points and 4 rebounds in just 14 minutes of playing time.

Practice this week has been focused on “tightening screws,” according to Kaufusi. BYU has been working on taking care of the ball and free throws (BYU shot 38.1 percent from the free throw line in Monday’s game). And as far as cohesively playing together, he says it is coming along.

“Just like any other team, (chemistry) comes as time goes, but I think we have pretty good chemistry,” Kaufusi said. “It’s just trying to figure out when people need to be in and what’s your best time to make your move when you’re in there.”

Aytes is more than hopeful for the chemistry to fall into place now that all the players are recovered from their injuries. In the four games BYU has played this season, six of the players have sat out for injuries from at least one game.

“We have a lot of guys who were injured at the start and didn’t really get to play with each other,” Aytes said. “Now people are healthy and they’re trying to get thrown back in the mix. With all that going and the pressure, it’s thrown off some of us, but as long as we keep practicing hard and staying healthy the cohesion will get there.”

The Cougars have a chance to redeem themselves Friday night against Adams State (0–2), a team that plays fast, shoots the three in transition and will pressure BYU on defense.

BYU takes on Adams State Friday night in the Marriott Center at 7 p.m.