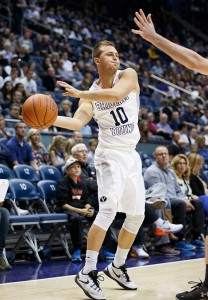 Ainge redshirted from 2012–13 before serving a mission for The Church of Jesus Christ of Latter-day Saints in Chile. His father, Danny Ainge, played for BYU and in the NBA from 1981–95.

Another roster change is BYU freshman Alan Hamson will be redshirting the 2015–16 season. Hamson, a 7-foot-2-inch forward, is the brother of Jennifer Hamson, an All-American in volleyball and basketball at BYU.

“We look forward to (Alan Hamson) practicing with us and seeing how he develops during the season,” Rose said. “And then (Cooper Ainge) will just be a student here at BYU from now on.”