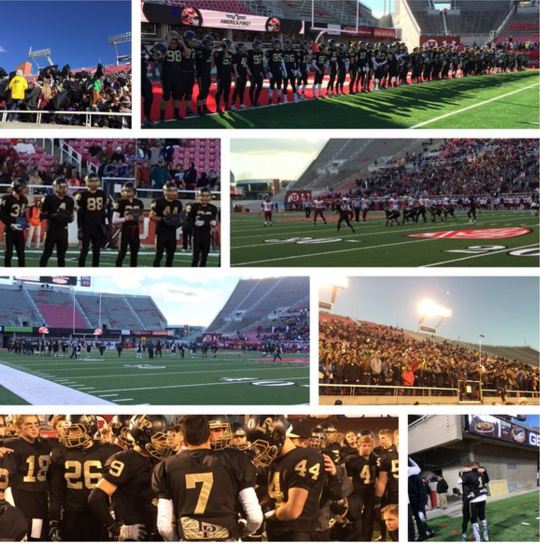 SALT LAKE CITY – Championship dreams came crashing down in painful fashion for both Lone Peak and Timpview on Friday.

The Knights saw their perfect football season come to an end on a dramatic last second touchdown that gave Herriman a 17–14 victory in the Class 5A championship game. The Thunderbirds were denied a fourth consecutive Class 4A title when East totaled 504 rushing yards to run away with a 49–14 win in the Class 4A Championship game.

Lone Peak (13–1) had a decent chance to claim its first state title since 2011 when it rallied from a 10–0 halftime deficit. The Knights finally scored their first points when senior quarterback Talmage Gunther connected with Jon Christensen for a 32-yard strike, cutting Herriman’s lead to 10–6 with 0:26 left in the third quarter.

Lone Peak cashed in on another long scoring drive late in the fourth quarter and finally took a 14–10 lead when Tyson Doman hauled in an 8-yard pass from Gunther with 4:28 left.

Gunther finished with 167 yards and two touchdowns on 16-of-28 passing. The senior also ran for 100 yards on 22 carries.

[pullquote]“We made some adjustments in the second half and came out a little better. But it was too little, too late. We had a chance to win at the end. What more can you ask for? Hats off to Herriman. They did what they had to do at the end.” —Mike Mower, Lone Peak coach[/pullquote]

The Knights’ defense had shut down Herriman for much of the second half, but could not get key stops in the final two minutes. Mustangs quarterback Hayden Reynolds flipped the ball to receiver Noah Vaea out in the flat on 4th-and-5 at the Herriman 48. Vaea took the short pass 41 yards down to Lone Peak’s 11-yard line. It set up a 1-yard TD run from Kaden Strasters with 22 seconds left.

The Knights ultimately could not overcome a first-half effort where they totaled just 87 yards and zero points on offense.

“We made some adjustments in the second half and came out a little better,” Lone Peak coach Mike Mower said. “But it was too little, too late. We had a chance to win at the end. What more can you ask for? Hats off to Herriman. They did what they had to do at the end.”

Timpview (11–2) faced an entirely different scenario. Once East got going on the ground, the Leopards were impossible to stop.

The Thunderbirds trailed the entire game. They tied it up twice on in the first half on a 3-yard run by senior quarterback Kahi Neves and a 1-yard run by fullback Saia Folaumahina. Then East ran off 35 unanswered points over the final 2 ½ quarters.

East took the lead for good when senior quarterback Johnnie Lang raced 57 yards untouched to put the Leopards up 21–14 with 1:53 left before halftime. Lang broke free for a 64 yard run to give East it’s first second-half touchdown in the third quarter and the Leopards never looked back.

“It couldn’t have come against a better team or a better program,” East coach Brandon Matich said. “Timpview brought out the best in us. There’s no question.”

Lang ended up running for 199 yards and three touchdowns on 20 carries. His teammate, Jayden Warren, added 231 yards and two scores on 18 carries.

East snapped a 15 game postseason winning streak for Timpview. Ironically, the Leopards were also the last team to beat the T-Birds in a playoff game back in 2011.

Waffle Love at first bite: Local devotion to the first food truck in the valley is waffle-iron-clad Next post