Home News Celebrity Waffle Love at first bite: Local devotion to the first food truck in the valley is waffle-iron-clad

Waffle Love at first bite: Local devotion to the first food truck in the valley is waffle-iron-clad 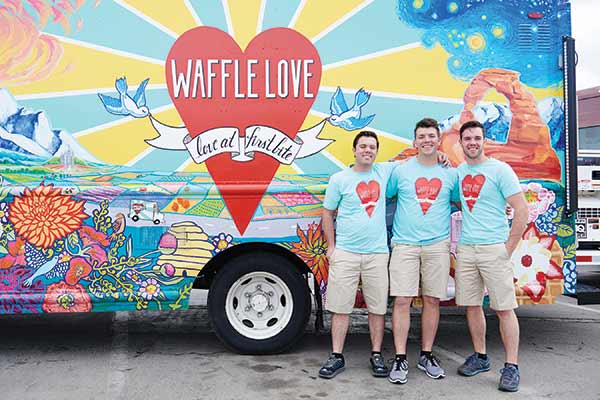 Adam Terry, left, opened Waffle Love after he lost his job. Just three years later, he and his brothers, Jared and Steven, center and right, made it big on Food Network’s “The Great Food Truck Race.” (Photo courtesy Food Network)

In the second episode of Food Network’s competitive show, “The Great Food Truck Race,” Waffle Love owner Adam Terry and two of his brothers were in the truck, slicing fruit, making dough and serving customers in Arizona. Adam, in an emotional moment, turned to the camera and said, “I’m overcome, because I’m so grateful for everybody who has helped us today after everything we had to do to get to this point. We love you with all of our hearts. We waffle love you.”

And loyal customers of the valley return the waffle love. With more than 47,000 followers on Instagram and hundreds of daily customers enjoying their waffle creations and sporting their merchandise, Utah County was happy to l’eggo-their-Eggos in favor of a local gourmet waffle.

But in the beginning, there wasn’t much waffle love to go around.

Adam came up with the idea for the Waffle Love food truck when he lost his banking job and decided to pursue his passion-verging-on-obsession with food. 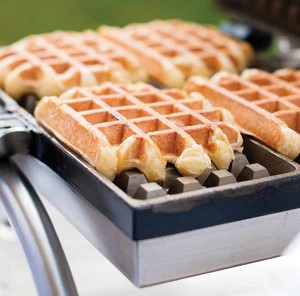 Waffle Love Firsts
First Day: Sold 13 waffles.
First Menu Item: The Waffle Works: waffle with strawberries, cream and Biscoff.
First Waffle Truck: Broken down. But Adam is hoping to send it to Hawaii to share the Waffle Love.
First Instagram Post: 44 likes. Now they regularly get over 2,000 likes.
First Logo: Adam’s wife designed the one-and-only logo in 10 minutes, and it’s been the same ever since.

“I used to go through phases where I would take a complicated food item and make it myself,” Adam says. “I once made my own pastrami, curing the meat and everything. It was amazing. But after going through a waffle phase, I knew that’s what I wanted to do.”

Even before the truck rolled onto the scene, he sold his waffle creations at local farmer’s markets in 2012. Then he went all in — he bought and outfitted the truck, and opened Waffle Love, making it the one and only food truck in the valley. Adam held a grand opening at The Shops at Riverwoods with a simple menu.

“Our one and only menu item was the Waffle Works — a waffle with Biscoff, strawberries and cream,” Adam says. “We didn’t even have Nutella.”

Adam was thrilled when he sold out. The next day, the first regular business day, was a different story.

“On our first official day of business we set up on Center Street in Provo near a bar,” Adam says. “We sold 13 waffles. The first few months were similarly slow, but I set a goal to sell 100 waffles a day.”

Now, between one truck in St. George, one in Davis/Weber county, two in Salt Lake City, one in Arizona, one truck and a brick-and-mortar store in Utah County, Waffle Love serves up 1,700 waffles a day. The menu has also grown, offering chicken and waffles, waffle grilled cheese, waffles with raspberries and cream — and waffles with Nutella.

[pullquote]“On our first official day of business, we set up on Center Street in Provo near a bar. We sold 13 waffles.” —Adam Terry, co-founder of Waffle Love[/pullquote]

“I can’t believe how far we have come,” Adam says. “We went from being one local food truck to being on national television. These have been the most amazing years of my life.”

Adam and his brothers took second place in “The Great Food Truck Race,” and afterward, Adam went to Belgium, home of the original waffles that inspired Waffle Love. His consensus?

“Ours are better,” Adam says. “But I might be a little biased.”

Made in UV: Utah Valley Christmas goods from our backyard Next post