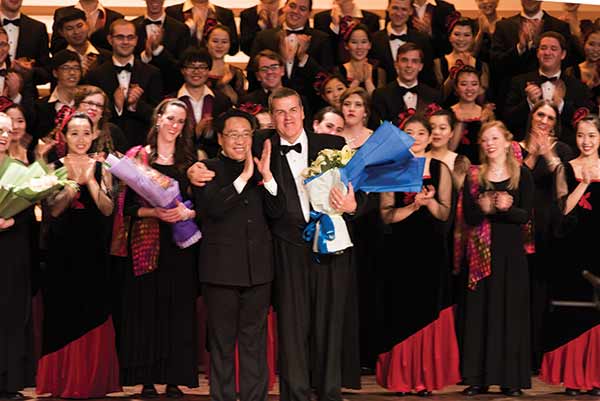 After leading the BYU Singers on a tour through China, Dr. Ronald Staheli retired as director of the elite ensemble. In China he spent hours posing for pictures after each performance — and is still sending autographs to his fans overseas. (Photo courtesy Sandefur Schmidt)

From daily rehearsals to standing ovations, Dr. Ronald Staheli bows out after founding and leading the BYU Singers for 30 years.

When Dr. Ronald Staheli was asked to reinvent the role of the top BYU choir, there was one primary administrative goal.

“I was told that the choir needed to fit on one bus to make touring easier,” Dr. Staheli says. 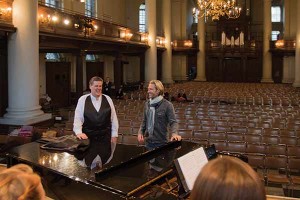 First collaboration with composer Eric Whitacre: “Eric snuck in while we were rehearsing one of his pieces, and when we finished, I turned around and saw him lying on his back like da Vinci’s Vitruvian Man,” Dr. Staheli says. “He loved our sound from the start.”
Other firsts include performing in Carnegie Hall and BYU Singer’s first album, “We Sing of Christ: The Songs of Zion.”

Before the BYU Singers was established, Dr. Staheli developed a prototype — the BYU Chamber Choir — to expand on the possibilities of a one-bus-only choir. It worked, and a few years later the BYU Singers was born, making Dr. Staheli the founder and first director of the audition-required elite ensemble, with daily rehearsals at 1 p.m.

“I knew I wanted a well-blended, close-knit choir of individuals who could be a soloist in one moment and be happy to be a backup the next,” Dr. Staheli says. “But I tried not to be too specific because I wanted to let the choir’s personality bloom into what it is instead of forcing it into what I thought it should be.”

Soon after the choir’s founding, they took their first international tour to Russia and Eastern Europe. While most of their tours since then have lasted around three weeks, their first tour was nearly six weeks long. It was a whirlwind of singing, touring, bus rides and plane rides across Europe before they returned home.

“I was anxious because I felt the responsibility of needing to do our best — not only for the choir, but for BYU and the LDS Church as well,” Dr. Staheli says. “On that first tour, I had to figure out how long we could tour and walk around and still be at the top of our game for our performance that night. We all learned so much about living like professional musicians.”

For the next decade, Dr. Staheli and his choir toured, performed and began gaining national and international recognition. In 1997, the BYU Singers released their first album, and have released more than 20 since then.

In 2006, the BYU Singers became the first and only university ensemble in the United States to perform at the three top choral music conferences — the American Choral Directors Association convention, the Music Educators National Conference and the National Collegiate Choral Organization conference.

All were invitation-only performances, which means music educators around the nation had not only heard of the BYU Singers, but they loved what they heard.

At the American Choral Director’s convention, Dr. Staheli and his singers filed on stage, performed a few well-received pieces, and then performed “Epitaph for Moonlight,” a piece overflowing with nontraditional sounds from intro to ending. The BYU Singers performed as rehearsed, and when Dr. Staheli cued the final cut-off, the auditorium erupted.

[pullquote]“The issue isn’t that they miss me — it’s that I miss them. Every day at rehearsal time, 1 p.m., I have to get busy doing something productive so I’m not sitting around wishing I was there.” —Dr. Ronald Staheli, creator of BYU Singers[/pullquote]

“We performed that piece in the middle of our program, and when we finished it, there was a spontaneous standing ovation,” Dr. Staheli says. “I was taken aback that these choral musicians, my peers, connected with the piece that much. It was one of the most meaningful standing ovations of my career.”

Dr. Staheli led the BYU Singers through the United States, where they performed in Carnegie Hall for the first time; Europe, where their voices rang through ancient cathedrals; Africa, where they fought off mosquitoes in remote villages; China, where Dr. Staheli signed autographs for hours after performances (and is still mailing autographs); and back home, where Utah Valley proudly joined in celebrating the choir’s successes.

Then in May 2015, after the ensemble’s month-long China tour, Dr. Staheli retired and passed the baton to Andrew Crane, a former member of the BYU Singers.

“It’s hard to be on the outside and know it’s going forward without me,” Dr. Staheli says. “The issue isn’t that they miss me — it’s that I miss them. Every day at rehearsal time, 1 p.m., I have to get busy doing something productive so I’m not sitting around wishing I was there. Every day with my singers was an emotional and spiritual uplift that can be compared to very few other things.”

Experiencing a first of his own in retirement, he is revisiting composition, a part of his music career that was crowded out while directing the BYU Singers. Even with his career taking a new path, he keeps his singers close to his heart.

“Two years ago, we had seven children of former BYU Singers who earned a spot in the group, so I’ve started to feel like a grandfather,” Dr. Staheli says. “I’ve worked intensely with so many kids and they have all become very dear to me. They are like my family, and will be forever.”

Made in UV: Utah Valley Christmas goods from our backyard Previous post