Printing around the Christmas clock with Pro Digital Photos 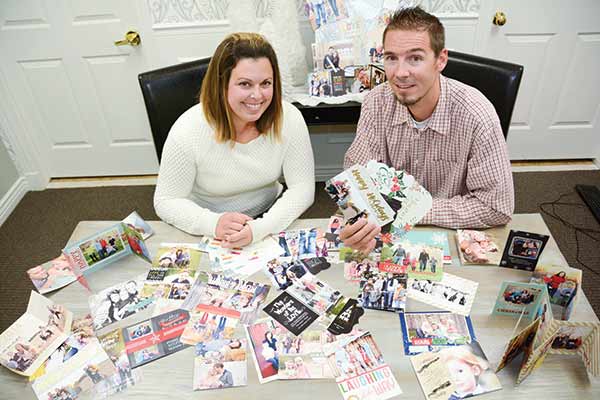 Husband-wife duo Cory and Veronica Chapman go through dozens of card designs every year to decide what’s hot and what’s not for each Christmas season.

The owners of Pro Digital Photos run into weeks of not-so-silent nights to prepare for the most wonderful time of the year.

It’s midnight in Utah County on a December evening. Snow falls, a street light hums, a Christmas bell jingles on a store door as a weighty wind rolls down the street. All is calm, all is bright — until you reach the front door of Pro Digital Photos in downtown Pleasant Grove.

Inside, printers hum, machines cut paper and shipping labels print as Cory and Veronica finish up the day’s orders.

Their weeks leading up to Christmas are the busiest of the year, and working into the early hours of December nights is just one part of the job they love.

And they are just glad they made it through their first few years.

“‘Good Things Utah’ had us on their show the first year we made Christmas cards and we got slammed,” Cory says. “We weren’t prepared for what was coming, but we somehow pulled it off.”

Customers were drawn to the variety of card designs as well as Veronica’s tinsel-happy store décor.

“When we decided to make a tradition of going all out with our decorations, we were taking a risk,” Veronica says. “Our plan was to create an environment that people loved while they were here, and that they would tell their friends about when they left.” 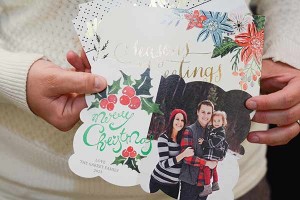 This year’s trends are making their debut in colorful fashion. While glitter was all the rage on last year’s stage, floral patterns and shimmery foil greetings are the hottest looks in the book for 2015.

Word of mouth spread, and they doubled their orders the second year. Now their staff triples during the holidays to keep up with the orders, and Cory and Veronica work to make sure it all runs smoothly.

A few years ago, between the two of them, they were running a 24-hour operation, exchanging high-fives as they traded places. Since then?

“Things are much better now,” Cory says. “I’ll usually be in bed by 3 a.m., and she’ll head out around 6 a.m. Closing down for three hours is a big step!”

Friends have made a tradition of stopping by to offer some holiday cheer to Cory and Veronica.

“When we’re there until midnight and later, we typically leave the door open while we print that day’s orders,” Veronica says. “Sometimes friends will stop by to say hi and bring us a Coke or donuts.”

Even without the friendly visits and treats, Veronica and Cory wouldn’t change a thing.

“There’s nothing like seeing a bunch of Christmas cards on somebody’s fridge when you walk into their home,” Cory says. “We love being a part of that tradition. It makes it worth the late nights.”