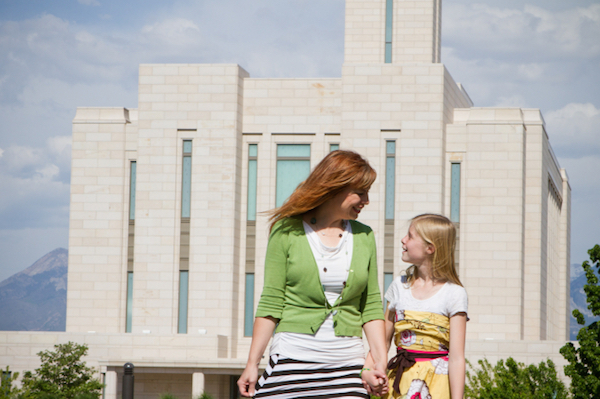 The Church of Jesus Christ of Latter-day Saints has an historically complicated relationship with the doctrine of Mother in Heaven. On one hand, the Church is unique in its bold teachings of Her existence, and prophets, apostles, and hymn writers have all testified of Her reality.

However, Church leaders have also been historically tight-lipped on the subject, mostly because little about Mother in Heaven has been revealed to the Church as a whole. A few quotes have appeared here and there — including in Elder Jeffrey R. Holland’s most recent general conference address “Behold Thy Mother” — but not until recently has the Church released an in-depth essay on Heavenly Mother.

In case you missed it, here are five outstanding quotes from the Church’s new Gospel Topics essay “Mother in Heaven”:

1. “All men and women are in the similitude of the universal Father and Mother, and are literally the sons and daughters of Deity.”

In a 1909 statement published in the Improvement Era, the First Presidency explicitly mentioned the existence of Mother in Heaven. Though Joseph Smith was quoted after his death as having taught some women this doctrine, there is no record of a formal revelation stating as much.

Susa Young Gates, who was serving as the recording secretary of the Relief Society general presidency in 1920, wrote then that Joseph Smith’s visions and teachings taught this truth. (“The Vision Beautiful,” Improvement Era 23, no. 6 (Apr. 1920): 542.)

3. Our heavenly parents work together for the salvation of the human family.

President Harold B. Lee taught in 1964 that “we have a Heavenly Father and a Heavenly Mother who are even more concerned, probably, than our earthly father and mother, and that influences from beyond are constantly working to try to help us when we do all we can.”

4. Women have the potential to become like their Heavenly Mother.

Though we do not pray to Heavenly Mother or speak as much about her as we speak about Heavenly Father, She is indeed divine, and Her daughters have potential to become like Her. Elder Rudger Clawson wrote in 1910, “We honor women when we acknowledge Godhood in her eternal Prototype.”

5. Her existence is foundational to our theology.

In 1995, Elder Dallin H. Oaks taught, “Our theology begins with heavenly parents. Our highest aspiration is to be like them.”