BYU relying on defense to gain control of game against Utah 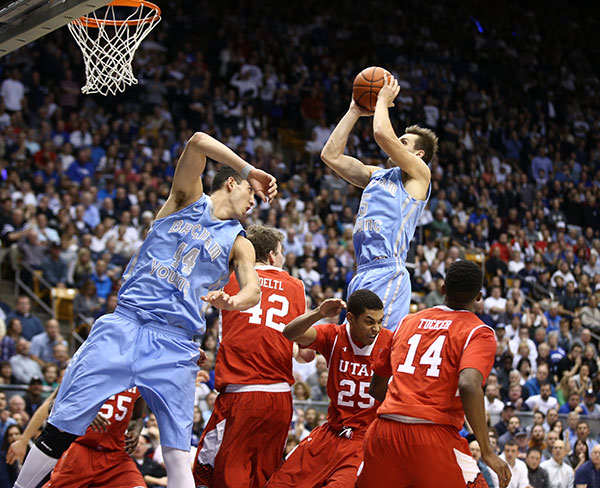 BYU senior Kyle Collinsworth takes a shot during a game against Utah in 2014. The Cougars are seeking revenge for last season’s loss and hope to take control of the game early on Wednesday night. (Photo by BYU Photo)

The BYU-Utah rivalry is something that many players on the BYU basketball team have grown up with.

“It means a lot to me,” said senior Nate Austin. “I’ve grown up loving blue and hating red. That’s how I was raised.”

Unfortunately, BYU has a sour taste in their mouths from the past two years, especially last year. While the Cougars lead the all-time series with 129–127 wins, the Utes have won the last two match-ups. And last year 65–61 loss at home — which included a loss of Austin to a torn hamstring for the remainder of the season — was a hard pill to swallow.

Outside of the fact that BYU lost, BYU senior Kyle Collinsworth remembers one thing.

The control is going to come from a continued effort on defense, something the Cougars have heavily focused on this season.

“I think that the things we really can depend on are our effort and our defensive assignments and our ability to rebound — those things have been solid for us,” BYU head coach Dave Rose said.

Rebounding, Rose says, is something BYU is good at doing — but so is Utah.

“Defensive rebounding for us is huge,” Rose said. “(Utah) is very, very good at tracking down their misses. In some games they don’t miss many, but hopefully we can create that. It’s two-fold these defensive possessions. We have to really guard and challenge shots to get them to miss. Then the next challenge is to grab it and track it down.”

[pullquote]”This is one of those games that is a real opportunity for your team early in the season. Hopefully we can take advantage of it.” —Dave Rose, BYU head basketball coach[/pullquote]

Another challenge the Cougars face against the Utes will be the battle of the bigs in the paint. Utah has 7-foot sophomore Jakob Poeltl, who was named to the CBSSports.com Freshman All-American team last year.

“Poeltl brings a lot of challenges with his height,” said Kyle Davis, a BYU junior forward. “Then on top of that he has a great skill set. He’s a great player, so we’re going to have to really be on our game to defend him and some of their other great players.”

Last year’s Deseret Duel was an endless tale of unfortunate events for BYU’s posts. Not only was Austin out in the first minutes of the game, but BYU’s short bench of forwards got into foul trouble early. Corbin Kaufusi, a sophomore center, says the team is better equipped this year with a deep bench of posts and defense training.

BYU anticipates a high-energy game as well as a challenging game.

“This is one of those games that is a real opportunity for your team early in the season,” Rose said. “Hopefully we can take advantage of it.”

The Cougars play the Utes on Wednesday, Dec. 2 at 8 p.m. at the Huntsman Center in Salt Lake. The game will be televised live on the Pac-12 Network and broadcast live on the Cougar IMG Sports Network, KSL NewsRadio 102.7 FM/1160 AM and BYU Radio — Sirius XM 143.

Bronco Mendenhall closing in on 100 victories at BYU Previous post

BYU vs. Utah: The lows, the almost comeback and Nick Emery's punch Next post