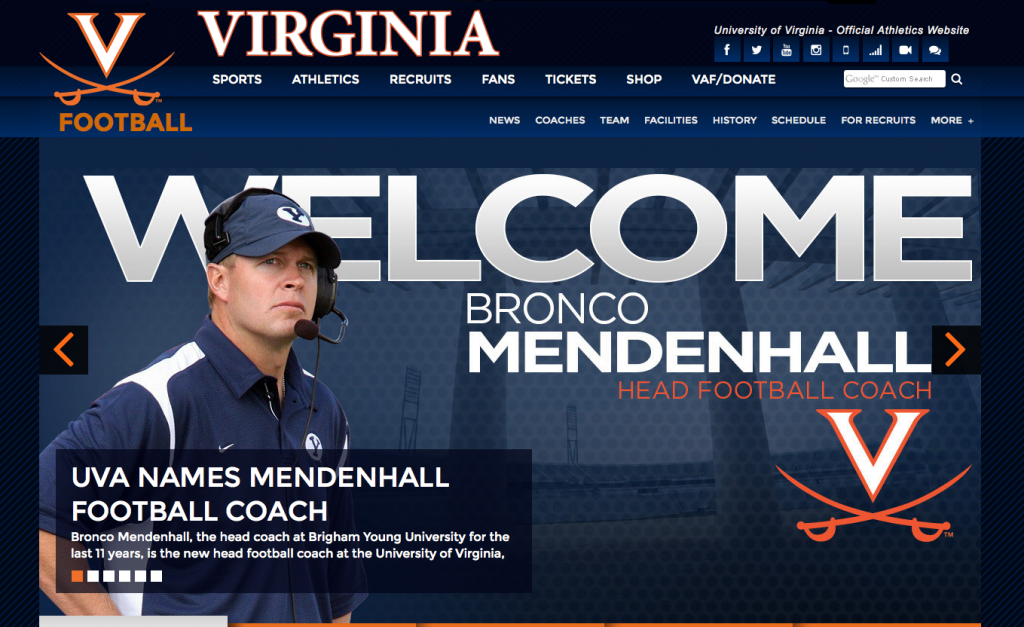 After eleven years and 99 wins, Bronco Mendenhall is taking his talents to Charlottesville, Virginia as the new head coach of the Virginia Caveliers.

“I wish to express my appreciation to President Teresa Sullivan, Director of Athletics Craig Littlepage and Executive Associate Athletics Director Jon Oliver for their belief and trust in me to lead and guide the football program at the University of Virginia,” Mendenhall said in the announcement. “Professionally and personally I seek to embrace the highest standards in college sports, on and off the field, and I love the high standards both academically and athletically at Virginia. I am excited to not only help provide the continual growth and development of the student athletes academically but also reestablish Virginia as a consistent winner with a fiercely competitive and winning product on the football field.”

Under Mendenhall, the Cougars tied for seventh among all FBS programs for the most Academic All-America citations over the last decade and BYU tops all FBS programs with the most selections (39) to the National Football Foundation Hampshire Honor Society (recognizing starters and significant contributors finishing their eligibility with a 3.2 GPA or better over their college career) since the program began in 2007.

Mendenhall still has one game with the Cougars at the Royal Purple Las Vegas Bowl.

“I am extremely grateful for the opportunity I’ve had to work with Bronco as our head football coach. He has worked tirelessly on behalf of our student-athletes to give them the best possible collegiate experience, on and off the field. Bronco has been loyal through and through to BYU. I’m grateful for everything he’s done for the football program. He has a strong desire to complete this season and will coach our team at the Royal Purple Las Vegas Bowl. We wish Bronco, Holly and their family the very best as they move on to this new opportunity.

Holmoe said the national search for the next BYU head football coach will begin immediately.