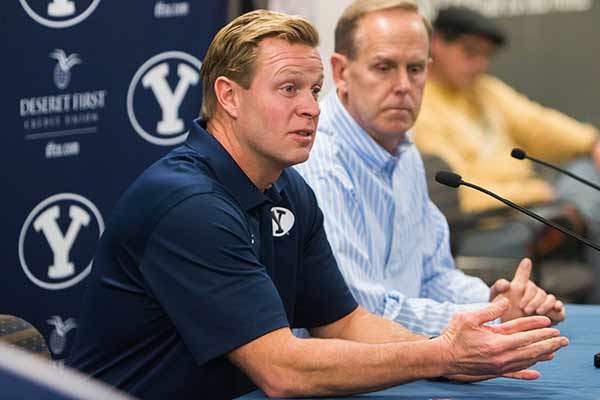 Bronco Mendenhall announced he will coach the Virginia Caveliers in 2016. (Photo by Ari Davis/The Universe)

PROVO — Bronco Mendenhall was not the first choice to take over as the BYU football coach when he was hired 11 years ago. Mendenhall turned out to be the right choice in turning around a program that had suffered three consecutive losing seasons.

Now he is tackling a new challenge in resurrecting a different football program mired in mediocrity. The similarities between where Virginia is now and where BYU stood 11 years ago made it seem too good for Mendenhall to pass up this new opportunity.

Virginia hired him on Friday to take over for Mike London, who resigned on Sunday after a 4-8 season. London had a 27-46 record in six seasons and suffered four straight losing seasons.

Mendenhall, on the other hand, leaves BYU after guiding the Cougars to 11 straight bowl games, two conference championships and national rankings in nine of 11 seasons. He sees potential for similar success with the Cavaliers.

“Virginia reminds me of a lot of BYU when I was named the head coach here,” Mendenhall said. “I see tremendous chance for growth and opportunity. I love to build. I like challenge. I like growth. I like learning. I see a fantastic challenge and opportunity with real and tangible results that can happen. I’m passionate to help the players there experience that.”

Virginia first contacted Mendenhall shortly after BYU’s 51–28 victory over Utah State last weekend. He interviewed with the Cavaliers on Monday and things progressed rapidly from there.

Mendenhall received an offer from Virginia on Friday. He signed a five-year contract paying $3.25 million per year on Friday afternoon and then met with the team shortly afterward to inform them of the news.

The BYU players displayed a mix of emotion in that team meeting. Sadness, shock and even a little anger emerged as they learned their coach will be moving on next season.

“We all felt a feeling of sadness because Coach Mendenhall means so much to us — and not just what he does for us on the field, but for how he helps us off the field,” BYU quarterback Tanner Mangum said. “He’s been the coach since I was 10 years old — basically since I started watching BYU football. To think about him gone is kind of a sad feeling because he’s meant so much to this program, to this team and to me personally.”

Although Mendenhall was hired after Utah coach Kyle Whittingham turned down the job in 2004, he ended up being a good fit for what BYU needed at that time. BYU Athletic Director Tom Holmoe said that Mendenhall has changed the football program in many positive ways during his 11 years at the helm.

“It’s funny how some people report that Bronco was the default coach when we hired him,” Holmoe said. “That’s far from the truth.”

Mendenhall will stay on as head coach through the Las Vegas Bowl before departing to Charlottesville. He has not decided yet if he will bring any BYU assistant coaches with him, but indicated that is an option he’s considering.

For now, his focus is squarely on the Las Vegas Bowl and preparing for his final game with the Cougars. Mendenhall will be going for his 100th career victory in his final game at BYU and he wants to go out on the right note.

[pullquote]“My players know who I am.  They are currently my priority. Anything I do in relation to that job is after the upcoming game. It can happen sequentially and it will happen sequentially.” —Bronco Mendenhall, BYU head football coach[/pullquote]

One thing Mendenhall does not want to do is face the Cougars on the football field when he is gone from Provo. Virginia and BYU are scheduled to play in 2019 and 2023. If Mendenhall is still coaching the Cavaliers at that time, he’ll ask for the series to be moved to a future date.

Mendenhall said that BYU has done so much to shape his life, he doesn’t feel like he could contain his emotions well enough to coach against the Cougars.

“I have feelings for the players in this program and they’re not going away in four years,” Mendenhall said. “I’d just as soon have that game be moved back to when I’m done coaching — whenever that will be. I don’t want to play BYU and I don’t how to handle it.”

Presenting the Wrappers: Santa’s helpers at the BYU Store Next post