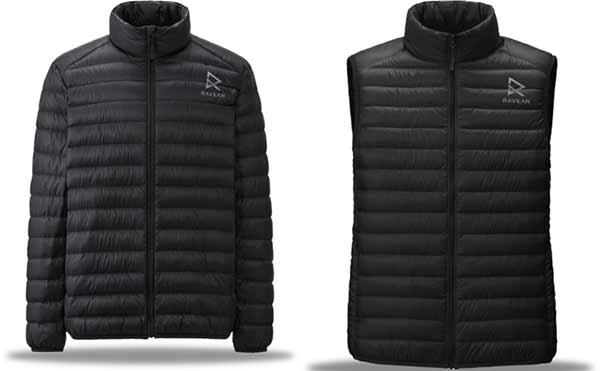 Ravean uses unique technology to heat its light down jackets and vests for up to 10 hours. (Photo courtesy Ravean)

It’s technology people have wanted for years, but no one could get the equation right. But then Ravean found a way to make a battery-operated coat both functional and fashionable, launched their campaign on Kickstarter and the rest is in the Kickstarter history book.

Kickstarter is a online platform that helps entrepreneurs fund their products without venture capitalism, which is the initial route Ravean took according to Bryce Fisher, co-founder of Ravean.

“We tried the venture capitalist route and that always comes with surrendering large amounts of equity,” Fisher said, “so we went the Kickstarter route to keep the capital in the house and fund it so we didn’t have to give up the ownership of the company.”

While heated jackets have been around for 10–20 years, Fisher says Ravean is unique because of how thin the down jackets are and how they are fashionable. As a Provo resident, Fisher and his team used Utah County residents as inspiration for the design.

“Most Utah County people have an active lifestyle and the problem we were trying to solve is people like to go outdoors, which usually requires people to have bulkier jackets, but then they needed to come back to the office,” Fisher said. “We wanted a jacket that was more urban friendly, but then it has the ability to go out into more rugged terrain.” 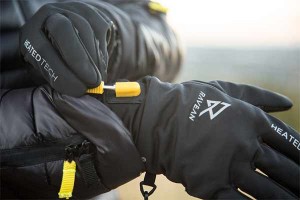 Ravean added a plug in the gloves so that the gloves could be heated too. (Photo courtesy Ravean)

It only takes 30–60 seconds for the cycling technology to heat the jacket, and the jacket can heat up to 70 degrees even when the external temperature is as low as -4 degrees. Plus, there are two controls for the jacket: one for the body temperature and the other is for either the pockets or gloves (depending on the setting). Temperature settings are the typical low, medium or high.

The key to the heated down jacket is the revolutionary battery. At just 0.5 pounds, the battery fits in a pocket and has enough power to last 10 hours (the equivalent of charging your phone up to six times — which the battery can do). Not only does it have the power to carry electricity for an extended period of time, but the battery can be completely charged in 90 minutes.

Ravean has already sent out its first shipment for Christmas and is taking pre-orders on indiegogo.com. And, ironically, the orders are mainly coming from two diverse locations.

“Funny enough it is Utah and New York,” Fisher said. “So you have this ultra-urban setting that is loving it and then you have the outdoors in Utah, so the purchase is adding up to the brand.”