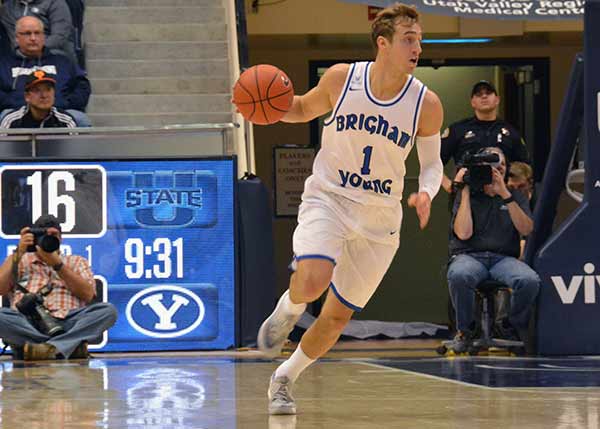 BYU senior Chase Fischer scored 24 points in the game against Utah State, but he attributes his success to his defensive efforts. (Photo by Rebecca Lane)

Fischer led the team with 24 points, who broke through a shooting slump that plagued him at the beginning of the season, to lead the Cougar offense. He even hit all six of his free throws to help bring the team’s free throw average up to 80 percent — a huge improvement for the team. But Fischer attributes his new found success on offense to his defensive efforts.

“I’m getting more active,” Fischer said. “It gets my body going. I’m a very emotional player; I talk a lot as these guys would know. So for me, when I get into defense, I get into the passing lanes a little bit, get a couple rebounds and that really fuels my offense. It lets me get in the rhythm.”

And the stats show a stronger effort on defense. Fischer had 4 rebounds and 3 steals against the Aggies. Add to that BYU’s 8 blocked shots and a total of 5 steals and BYU looks slightly transformed from its 2014–15 version of themselves.

[pullquote]”When I get into defense, I get into the passing lanes a little bit, get a couple rebounds and that really fuels my offense. It lets me get in the rhythm.” —Chase Fischer, BYU guard[/pullquote]

“For us, defense this year has been a lot better,” Fischer said. “We have a lot more guys buying in and I think our personnel is a lot better because Kyle (Davis) is a big dude, we’ve got Kyle Collinsworth who’s a 6-6 point guard and then Corbin in the middle, so I think we’re really big. That was our focus. Other than the flurry of 3s at the end we had a great defense night.”

Davis, who transferred from Utah State to BYU in 2014, had one of those blocks and recorded his fourth double-double of the season, scoring 14 points and pulling in 14 rebounds.

Sophomore Nick Emery returned after sitting out the Weber State game on a suspension for punching Utah’s Brandon Taylor during a game. Emery scored 17 points and snagged 6 rebounds.

“Nick has established himself as one of our top eight guys, that’s for sure,” said BYU head coach Dave Rose. “We really missed him the other night, so I just challenged him tonight to play hard, to go out there and give (his) very best effort. And then I was really pleased with how he was in execution.”

The Cougars travel to Colorado to play Colorado University at 6 p.m. on Saturday.

VIDEO: BYU's Divine Comedy explains what it's like to be a pedestrian in Provo in Queen parody Previous post