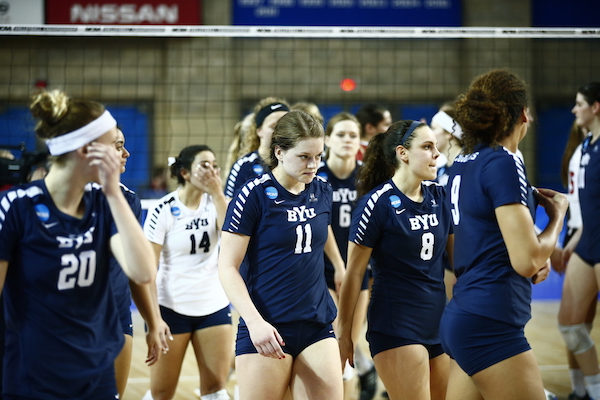 A disappointed BYU women’s volleyball team leaves their match against Nebraska. The Cougars lost to the Huskers 3–0 in the Sweet 16. (Photo by BYU Photo)

In a back-and-forth game, BYU (No. 13) couldn’t find the answers to Nebraska’s red hot offense and defense.

Senior Alexa Gray led BYU on offense with 18 kills and contributed 15 digs. Junior Amy Boswell had 8 kills against a solid blocking Nebraska team (17 blocks) and added 5 blocks of her own. Senior Ciara Parker led the Cougar defense with 18 digs.

The Cougars had a slow start in the first set falling as low as 4 points behind the Huskers.

In the first two sets, Nebraska held Gray to 11 kills on 35 attempts.

In a dramatic shift, the Cougars came out swinging in the third set. After starting down on the first two points of the match, the Cougars got their first lead of the match on a block by Amy Boswell 3–2. The Cougars continued on a 5–0 run before Nebraska took the lead at 8–7

Freshman Veronica Jones came alive big for the Cougars with a hard kill to tie the game at 9 and another kill to take the lead 10–9.

A kill by the Huskers put Nebraska at game point, but the Cougars battled with a kill by Gray to bring the score to 23–24. The Huskers won the game on a hitting error by Gray 25–23.

While there was not a “Hail Mary” comeback, the Cougars fought hard in the third set with 8 ties and 3 lead changes.