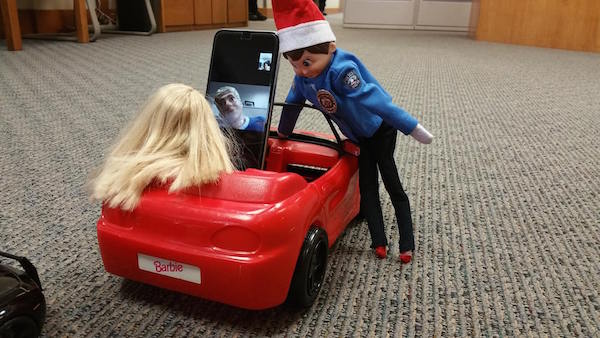 The Orem Police Department has been reenacting traffic stops with Elf on the Shelf serving as the officer and Barbie and Ken serving as the culprits.

“The way we set them up we wanted them to be something that actually happened in Orem,” said Lt. Craig Martinez of the Orem Police Department. “We wanted to keep it real, meaning actual calls or actual events that happened.” 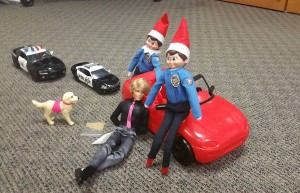 The first Elf on the Shelf reenactment was of a traffic stop where Officer Newell and his K-9 partner, Marco, searched a car and found the man’s meth and heroin. (Photo courtesy Orem Police Department)

In the most recent reenactment, Barbie represents a woman who was Facetiming while driving, so a police officer pulled her over and gave her a ticket.

“It obviously wasn’t fun for her that she got a ticket,” Martinez said. “We aren’t trying to poke fun at a person — which is why we don’t include names — but it’s a way to educate people in a fun way.”

Martinez got the idea from having an Elf on the Shelf at home with his family. He ordered a male and female Elf on the Shelf and asked the fire administrative assistant in Orem to sew police uniforms for the elves. He jokes that it’s weird he’s a police officer playing with dolls and admits that his wife makes fun of him for it, but he does it to reach out to the community and “to show the lighter side of law enforcement.”

“Some people just think we are bullies out beating up people, but we’re moms and dads,” Martinez said.