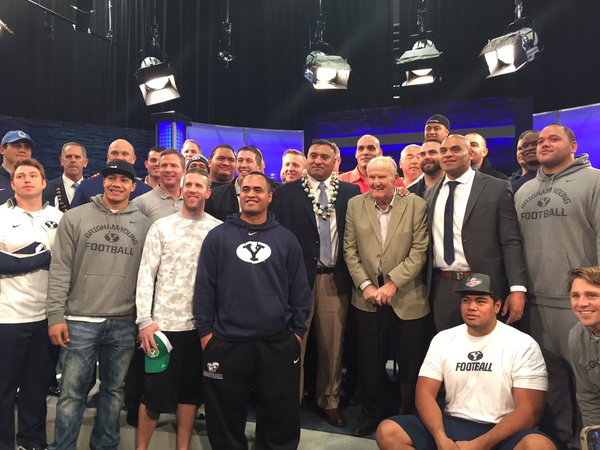 Coaching took root inside Kalani Sitake long before he stepped foot on a football field. Even as an 8-year-old BYU fan, he was quick to offer his opinion on which play should be called or which player needed to be more involved on offense or defense.

Now Sitake is in a position to finally make those calls. He was introduced as BYU’s new head football coach on Monday. For Sitake, it is a chance to put his stamp on the program where it all started for him.

“I’ve enjoyed my journey the last 15 years and it’s great to be back home,” Sitake said.

What will that stamp look like? Based on what Sitake has done at previous coaching stops at Southern Utah, Utah and Oregon State, BYU will fit the mold of a team that has a balanced ball control offense and aggressive punishing defense.

In his final season as Utah’s defensive coordinator in 2014, Sitake helped put together a Ute defense that led the nation in sacks. He mentored 14 NFL Draft picks during his time at Utah, including Morris Trophy winners Star Lotulelei (2011) and Nate Orchard (2014), and coached 12 all-league players on the defensive side of the ball.

Sitake’s approach for BYU is simple. He wants to incorporate a sound offense and punishing defense with the Cougars.

Sitake will definitely have tons of tools at his disposal to create a balanced offense. BYU returns a quarterback in Tanner Mangum who enjoyed a strong freshman season. The Cougars will also have a loaded backfield in 2016 headlined by talented runners like Algie Brown, Francis Bernard and possibly Jamaal Williams.

Defensively, Sitake will have plenty of solid playmakers to build his scheme around. The Cougars return several impact defenders next season including linebacker Fred Warner and defensive back Kai Nacua.

He feels like he has a foundation in place for immediate success.

Sitake is an instant role model for the Polynesian community. He is the first FBS head football coach of Tongan descent.

Many former BYU teammates, and his former coach LaVell Edwards, have given Sitake a ringing endorsement as the right man for the job. Edwards mentioned he saw potential for Sitake to become a football coach back during his playing days at fullback and had discussions with him about choosing that career path.

[pullquote]”I knew he was a guy we had to have in our program. He’s gone onto to be even more of a leader than I thought of at the time. Watching him develop, and having a chance to visit with him now, it’s become apparent that he is ready and he is the man, really.” —LaVell Edwards, former BYU football head coach[/pullquote]

Edwards is thrilled to see Sitake reach his potential and have his chance to add to what he started in Provo.

“I knew he was a guy we had to have in our program,” Edwards said. “He’s gone onto to be even more of a leader than I thought of at the time. Watching him develop, and having a chance to visit with him now, it’s become apparent that he is ready and he is the man, really.”

Sitake developed a reputation as a strong recruiter at Utah and Oregon State. That should be welcome news to BYU fans who have grown concerned that the Cougars lost a step in recruiting battles with other in-state schools like Utah and Utah State while under Bronco Mendenhall.

BYU Athletic Director Tom Holmoe said that since being hired Sitake has wasted no time getting in touch with current players and recruits. The level of energy he brings in these situations was enough to even fire up Holmoe himself.

“We haven’t been together very many days and we talk about things as if we were teammates in the same backfield,” Holmoe said. “I look forward to the opportunity to be with Kalani and look forward to the future of the BYU football program. This is a leader right here. In talking with him, to listen to the way he communicates with players is so exciting.”

Sitake offers an interesting contrast in personality as a coach. Off the field, he is humble, engaging and friendly. On the sideline, he can showcase a degree of intensity and passion that spreads like a flame along a piece of dry wood.

Having a nasty streak in his coaching serves Sitake well to get his players to perform at a higher level.

“Humility and meekness is really important, but there’s times to get nasty and times to get tough,” Sitake said. “Just remembering who you are as you play this game is important to us as a team and as a unit. We’ll make a lot of people proud of the way we play on the field and off it.”

Provo spends 2015 at the top of national rankings Next post