Home Sports BYU Every Rose has its thorn, and Larry Krystkowiak is BYU basketball’s current thorn

Every Rose has its thorn, and Larry Krystkowiak is BYU basketball’s current thorn 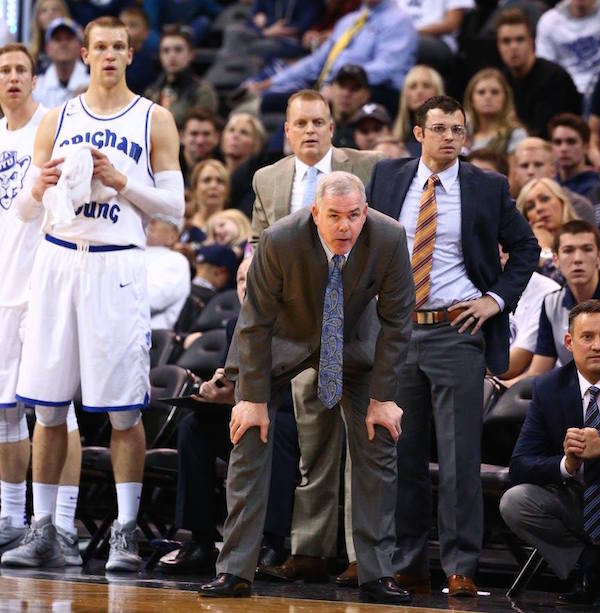 BYU coach Dave Rose wanted Utah to finish its contract with BYU before considering taking a “cooling off period” from the rivalry. (Photo by BYU Photo)

Every rose has its thorn — including BYU basketball coach Dave Rose.

Rose’s thorn happens to be Utah basketball coach Larry Krystkowiak at least for the time being. On Wednesday afternoon Krystkowiak phoned Rose and told him Utah wouldn’t be honoring its contracted game for the 2016–17 season.

“The events that have occurred in our recent games with BYU led me to ask (athletic director) Dr. Hill several weeks ago if we could take a cooling off period and put the rivalry on hold,” Utah coach Larry Krystkowiak said in a statement. “The level of emotions has escalated to the point where there is the potential for serious injury. Chris said he would support me in canceling next year’s scheduled game against BYU. I called and let Coach Rose know our intentions a few days after our game (on Dec. 2).”

[pullquote]”I think that if the game was scheduled to be played in the Huntsman Center next year the series would still be alive.” —BYU coach Dave Rose[/pullquote]

The events Krystkowiak refers to include the Utah win over BYU 83–75 at the Huntsman Center in December. During the game, BYU freshman Nick Emery received a flagrant two foul for punching Utah’s Brandon Taylor. The closest incident prior to Emery’s punch was in January 2010 when Utah’s Marshall Henderson punched Jackson Emery, Nick Emery’s older brother, during a game in the Marriott Center.

Yes, Rose agrees that the rivalry can get heated at times, but isn’t convinced that the safety of the players is an issue.

There is only one game (the 2016–17) left in the contracted series as the most recent contract was only for two years.

“(Krystkowiak) knows what’s best for his program,” Rose said. “I totally respect that it’s his program. I don’t respect the decision. I think that you’re raised — at least I have been raised — that your word is your bond. We made an agreement … I think that if the game was scheduled to be played in the Huntsman Center next year the series would still be alive.”

Krystkowiak is going to pay big for breaking Utah’s contract with BYU. For breaking the contract, Utah has to pay a guarantee fee of $80,000 to BYU.

“To me it seems like a significant amount of money; maybe to them it doesn’t seem like that big of a deal,” Rose said. “But the money can’t replace the game.”

As for the future of the rivalry, Rose doesn’t know.

“It’s scary because how do you put another contract together?”

This will be the first year the BYU-Utah basketball teams won’t play since 1944, which only didn’t happen because of World War II. The series has been running since 1909, ranking the seventh longest college basketball rivalry according to the NCAA record book. BYU leads the all-time series with 129–128.