Home Life Person of the Year: The Gardner Quad Squad

Person of the Year: The Gardner Quad Squad 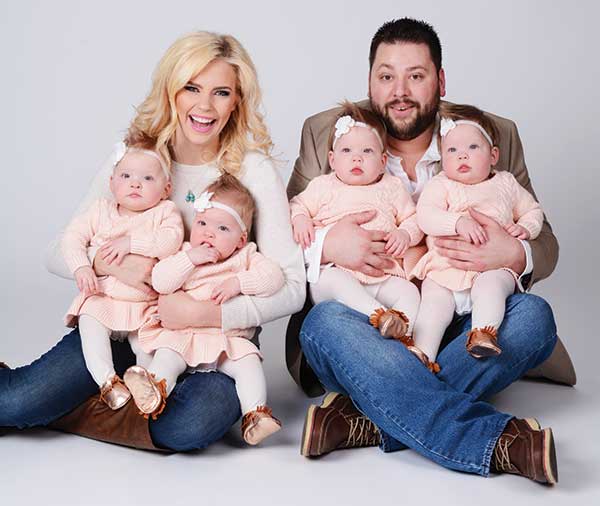 Ashley Gardner lost 20 pounds in the first trimester of carrying her quadruplets. By the girls’ birthday at 29 weeks and four days, she had only gained 37 pounds. “I thought the babies were trying to kill me,” she says. “I had vertigo. I couldn’t sit up. Tyson would force me to drink protein shakes. I craved the idea of having a craving! Sometimes all I could tolerate was cranberry juice.” Now her miracles have turned 1 and are about to capture the eyes of the nation in a new TLC series. (Photo by Dave Blackhurst)

On the morning of our Utah Valley Magazine photo shoot, the Gardners posted a video on social media of lowering the four crib mattresses for their double set of identical twins. Nearing their first birthdays, the four girls were becoming more mobile — and more dangerous — and one of them tried to crawl out for the first time.

As part of the cover story interview, editor Jeanette Bennett spent the evening as the third parent to these famous quads, and Esme pulled herself to a standing position for the first time.

“Oh my gosh, I hate it!” Ashley yelled out. “Stay little forever!”

With this instant family, there are a lot of firsts. And every first is also a last.

“He literally got the last two eggs that I had,” Ashley says of their IVF process. “If we had waited one more month, there would not have been eggs to harvest.”

Even with two eggs in play, the Gardners were given a 40 percent chance of having one baby. 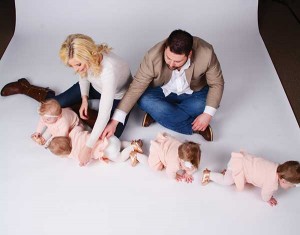 Tyson does a minimum of three loads of laundry daily to stay on top of bibs, pajamas and blankets. “Our washing machine is only going to last a year,” Ashley says. (Photo by Dave Blackhurst)

Both eggs took. Both eggs split. And both Ashley and Tyson’s arms were about to be full of everything they ever wanted. Ashley was carrying two sets of identical twins — the only babies she would ever give birth to.

This Lone Peak grad carried the four girls for 29 weeks and 4 days, with 7 1/2 weeks on hospital bedrest.

But Ashley wasn’t bored. By the time Ashley met her miracles, the Gardners had become quasi-spokespersons for the infertility community. She spent hours answering questions on social media, reading messages of support, and sending love to those struggling to start families.

“It’s amazing to see babies come into this world,” Tyson says with emotion. “You can’t describe it — you have to feel it.”

Five neonatologists — and a total of 37 people — were in the much-anticipated delivery room at Utah Valley Regional Medical Center, prepared to take care of each baby girl’s needs.

Within two months, Indie, Esme, Scarlett and Evangeline had all come home — and the family was together in their American Fork townhouse.

“I like to say, ‘These are the little blessings I never knew I wanted,’” Ashley says.

While the Gardners cried their way through much of their eight years of infertility, they now see the wisdom in the timing.

“Without infertility, we wouldn’t have the life we have now. I wouldn’t be as patient or as compassionate,” Tyson says.

The roller coaster also put them at the top of the local celebrity list. Ashley recently spoke at a women’s conference in Ogden, and they both shared their story at UVU.

“Ashley’s afraid to pray at the dinner table in front of our family, but here she is speaking to a large audience,” Tyson says.

Although it’s an ordeal to take the whole family out on the town, the Gardners don’t shy away from it. They own a quad stroller — which Ashley calls “the roller coaster” — and two double strollers. They had to buy a suburban to carry the gear, and then when they finally arrive at Costco, for example, it takes them 45 minutes to even walk in the door because so many people stop to ask questions.

[pullquote]“We work four times more than we ever did at our desk jobs. We literally work from the second we wake up until midnight. We want to do everything we can to support the girls. After struggling for eight years, I want to be here with them. It’s not even a question.” —Tyson Gardner, father [/pullquote]

“We wouldn’t trade our journey for anything,” Ashley says. “Trials suck, but they shape you into who you are supposed to be and connect you with the right people.”

When the Gardners first started their blog while expecting the quads, they were getting 2 million hits a month, which has leveled off to about 800,000 hits monthly.

“We interact with the people who follow us,” Tyson says. “We aren’t getting anything monetary out of it, but physically and emotionally we really are.”

Ashley takes the lead on social media, while Tyson focuses on their Etsy shop (etsy.com/shop/amiracleunfolding). Together they package and ship orders of their baby blankets and other products. They split blogging duties (gardnerquadsquad.com), while Ashley is primarily responsible for vlogging and YouTube.

Tyson is the oldest of 10 kids and grew up “dirt poor.” Ashley is the youngest of five and grew up “with money.” What they lack in similarities, they make up for in shared vision for their young family. They agree on how open to be on social media (translation: very open!).

Ashley is a master esthetician but was working for a tax accountant when she became pregnant with the quads.

Tyson worked in sales at Blender Bottle. When the babies were first born, he took paternity leave while they figured out their new normal. Soon, the couple started their Etsy business selling the blankets, headbands and other baby supplies that they created for their own bundles. The family also contracted with TLC Network for a new reality series, which began filming during the pregnancy and throughout the babies’ first year. The show will air in early 2016. (Check TLC.com for specific details on air dates.)

Although Tyson sometimes misses talking to co-workers, he says that “100 times out of 100” he would choose to be a stay-at-home dad.

“We work four times more than we ever did at our desk jobs,” Tyson says. “We literally work from the second we wake up until midnight. We want to do everything we can to support the girls. After struggling for eight years, I want to be here with them. It’s not even a question.”

Although 98 percent of the comments online are positive toward the Gardners, there are the occasional posts like, “That dad is so lazy! He needs to get a job!”

“I just laugh,” Tyson says. “Some people want to tell you what they think, but it’s mostly been very, very positive.”

One day during the pregnancy, the Gardners received 87 packages. The post office asked why they had let their mail pile up.

“We were here yesterday!” Tyson told them. “There are so many good people. In the past I’ve had a hard time with the media — they make it look like it’s the worst world ever. But our experiences have changed everything for me.” 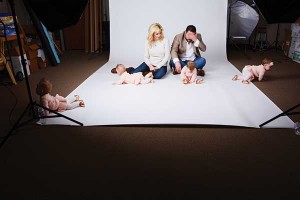 Tyson and Ashley recall the shame and embarrassment they felt during their infertility journey. They didn’t realize people all over the world were dealing with the same struggles.

“We tell them our story is not going to be theirs, but they do have a story,” Tyson says.

For the Gardners, their journey has been driven by faith.

“What we’ve been through has intensified our testimonies and our belief in a higher power,” Tyson says. “Our faith in God has grown, especially at the end when people were praying for us and we were feeling the power. God had a perfect plan for us, and all of those years were part of that plan. There is no way we would have been mentally or physically prepared for what God had in store until now. Multiples take a toll on every aspect of your life.”

Tyson and Ashley have high hopes and high excitement for the future.

“The girls are going to be forced to play an instrument,” Ashley says. “That is important to me.”

Although the girls look alike at first glance, close followers of the family can tell them apart. And Ashley and Tyson see four unique personalities.

“Indie is the most friendly — she’ll always give you a big smile,” Ashley says. “Scarlett is pretty sweet, too. Esme is our vocal one, and Evie is emotional. She’ll be fine and then all of a sudden start screaming for no reason.”

Both sets of grandparents live in Utah County and have lent support, as have aunts, uncles, friends and LDS ward members. But Ashley and Tyson largely take care of the girls themselves, which involves a tight schedule.

(With lots of playtime, diaper changes, feedings, cuddlings and baths in between.)

The first nine months were a blur, as Tyson stayed up during the night keeping up on feedings and changings. Then at 6 a.m., he would go to sleep and Ashley would take over. At nine months, the doctor told them to start sleep-training the girls.

“Our sanity is starting to return,” Tyson says.

Ashley says she’s grateful the first year is well-documented with photos and videos — and by TLC.

The Gardners will see the episodes as they come out, along with the rest of the country.

Find out who made the short list, meaning five people who were almost named Utah Valley Magazine’s Person of the Year here.

Learn about the Gardner Quad Squad’s nightly routine with “A Day in the Life of a Photo Shoot with Quads.”