The dark night set up a perfect scene as four robbers broke into a bank to reap their cash reward, but these robbers would soon learn this was no ordinary heist.

As they open the locker it reveals a fridge full of BYU Creamery goods instead of a large stash of cash. Surprise!

“You guys, they’ve got mint brownies,” one of the robbers announces in the video.

This is BYU Dining Services‘ most recent commercial used to promote the new BYU Food-To-Go location, which they are inviting the public to celebrate on Monday, Jan. 11 from 11 a.m. to 4 p.m.

And the heist isn’t only infiltrating the new BYU Food-To-Go location at 2191 North Canyon Road in Provo — it is overtaking the entire marketing department at BYU Dining Services.

A recipe for change

BYU Dining Services oversees most of the food on BYU’s campus including the Cougareat, Legends Grille, meal plans, Food-To-Go, Campus Floral and more. They are the largest single employer of BYU students with approximately 2,000 student employees, but administrators such as Dean Wright, the director of dining services, and Wallis Rothlisberger, department secretary for BYU Dining Services, were afraid they weren’t connecting to their students.

“We employ over 2,000 students and oftentimes students are our biggest critics since they eat our food most often, but at the same time they are our greatest asset,” Rothlisberger said. “We’re trying to connect to them and students know how to relate with students more so than sometimes there is a generational divide.”

And reaching those students required some outside help from a company owned by former BYU students, Infigo Films.

“Within minutes of sitting around this table (Infigo Films) had ideas of how to promote it and we were blown away,” Wright said. “I don’t know how good these guys cook, but we can provide food. We cannot do what they do. It’s a great relationship.”

The Infigo Films team is made up of producers Matt Moen and Bryson Frehner and founder Lane Russell, which helped bring a more comedic approach to BYU Dining Services advertising, focusing less on the food and more on the experience.

“We’ve never done this before,” Wright explained. “Our marketing has been focused on food. I think our mission and our vision is very predominant, culinary excellence and service. You can preach culinary excellence and people can come and have a great banquet or enjoy that ice cream cone, but how do you get them to connect and see that it’s fun. That’s where Infigo comes in. These guys are known for taking something that’s serious and making it light and fun.” 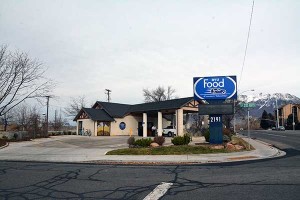 Infigo Films has worked with BYU Dining Services on a few of its commercials this year including “A New Day” and “Sneakerdoodle.”

Both films were a success and Moen attributes that to their motto.

“Whenever we do projects our motto is to make it look like the best three or four minutes of a movie,” Moen said.

For the most recent video, BYU Dining Services asked Infigo Films to promote its new Food-To-Go location, which formerly was Far West Bank.

And the “action packed” heist commercial was born.

To get the movement and the urgency a heist requires, Infigo Films shot the commercial in a single continuous take.

“If you have any element go wrong at all, you have to start over,” Russell said. “So you can get 90 percent of the way through it and then the timing on something doesn’t look right or the camera looked at the wrong place.”

After six hours of filming and 25 takes, they edited the commercial, adding color elements, and banked on a commercial that were just as good as BYU Dining Services’ mint brownies.

Banking on a new food-to-go location

Now BYU Dining Services has a new approach to reaching their students and they’ve heisted (bought) the bank, legally.

BYU Food-To-Go’s new location, 2191 North Canyon Road in Provo, achieved it’s goal to move to a location on the outside of BYU’s campus so the community didn’t have to infiltrate the traffic on campus. Plus, they kept an existing awning to cover the pickup area.

“We did turn the former drive-thru in the bank into a drive-and-load,” Rothlisberger said. “So you park your car there. We bring out the food, load it into the car, mobile swipe (or pre-payment) and then you can go.”

BYU Food-To-Go is open on Monday through Saturday from 7 a.m. to 6:30 p.m. Learn more at dining.byu.edu.