Home Sports BYU What will it take for BYU to repeat an upset at the Kennel?

What will it take for BYU to repeat an upset at the Kennel? 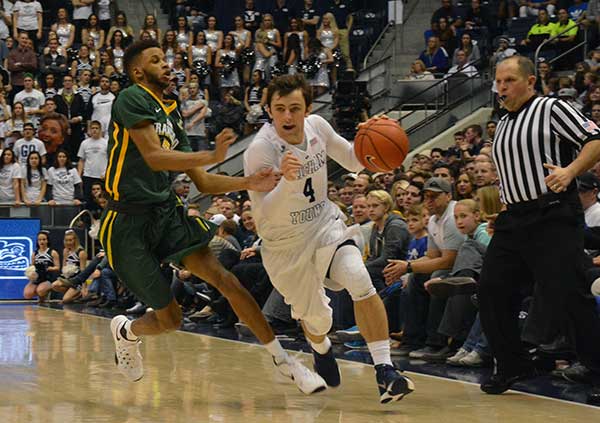 BYU freshman Nick Emery drives past a San Francisco defender in a game. Emery has been one of the top three scorers for BYU in the past three games. (Photo by Rebecca Lane)

Two made free throws with two seconds remaining in the game pushed BYU’s basketball team to a 73–70 win at the Kennel in March 2015 and ended a 41-game home winning streak for Gonzaga.

Jump ahead to Thursday night and the Cougars return to the Kennel to take on their toughest opponent in the West Coast Conference — Gonzaga — and they are looking for a repeat of last year’s upset, but BYU’s team is different.

BYU’s roster only has three current players who were part of that Kennel-busting crew: seniors Kyle Collinsworth and Chase Fischer and sophomore Corbin Kaufusi. Besides senior Nate Austin, none of the other Cougars have stepped inside the Kennel for a game.

“I think I really rely on our upperclassmen to help them,” BYU coach Dave Rose. “You just have to experience it to really understand it. I think that it’s a great home court advantage, but it’s also an opportunity to go in and play and experience that and then to execute at your best in that setting.

“We’ve got a lot of young guys that are playing a lot of minutes for us and have actually become where we depend on them for the success of our group, so hopefully they’ll be able to figure it our pretty quick.”

Those young guys being a scoring threat are a must for BYU to have a chance against Gonzaga Thursday night. In the Cougars last three games against San Francisco, Santa Clara and Pacific, BYU freshmen Nick Emery and Zac Seljaas have been in the top three scorers for the team. BYU junior Kyle Davis, who leads the team in rebounds so far this season, trusts his freshmen teammates.

“It’s so impressive to see how both of them have responded in their first year,” Davis said. “I would say, though, that it’s something that hasn’t shocked me because I’ve seen them be able to play this well all summer. They have the confidence. They have all the skills they need to be able to play like you see them playing now, so I’m happy for them and grateful that they are playing so well.”

As long as the freshmen shooters can stay calm, BYU has a chance with Fischer’s shooting and with Collinsworth distributing the ball. One of the biggest questions comes down to whether BYU can handle the defense necessary to stop Gonzaga forwards Kyle Wiltjer and Domantas Sabonis.

With Gonzaga center Przemek Karnowski undergoing a season-ending back surgery, the Bulldogs have relied on Wiltjer and Sabonis to lead their offense — and they have. In the last two games, Wiltjer has scored more than 30 points while Sabonis scored 28 points against Portland and 35 against San Francisco in the overtime win.

“(Gonzaga coach Mark Few’s) got really good complimentary players to go with them, but they don’t have the experience that (Kevin) Pangos and (Gary) Bell had,” Rose said. “They are still very capable of playing well as a group, and I think that’s the key that they are getting better. They just keep getting better. With every game you see improvement with the cohesiveness of the group. Hopefully, we are too. When you compare the two teams, I think that we’ve made some real strides over the past two or three weeks.”

What will it take for the Cougars to upset the Zags in the Kennel again this year? It will take everyone showing up and fulfilling their role. BYU needs the composure of its few experienced players. BYU needs the scoring power of its freshman. BYU needs a defensive game to hold off Sabonis and Wiltjer. Sounds tough, but it’s possible.

BYU plays Gonzaga in Washington at 7 p.m. MST. The game will be broadcast on ESPN2.