James the Mormon, not the rapper: Religion and rap converge with local musician James Curran 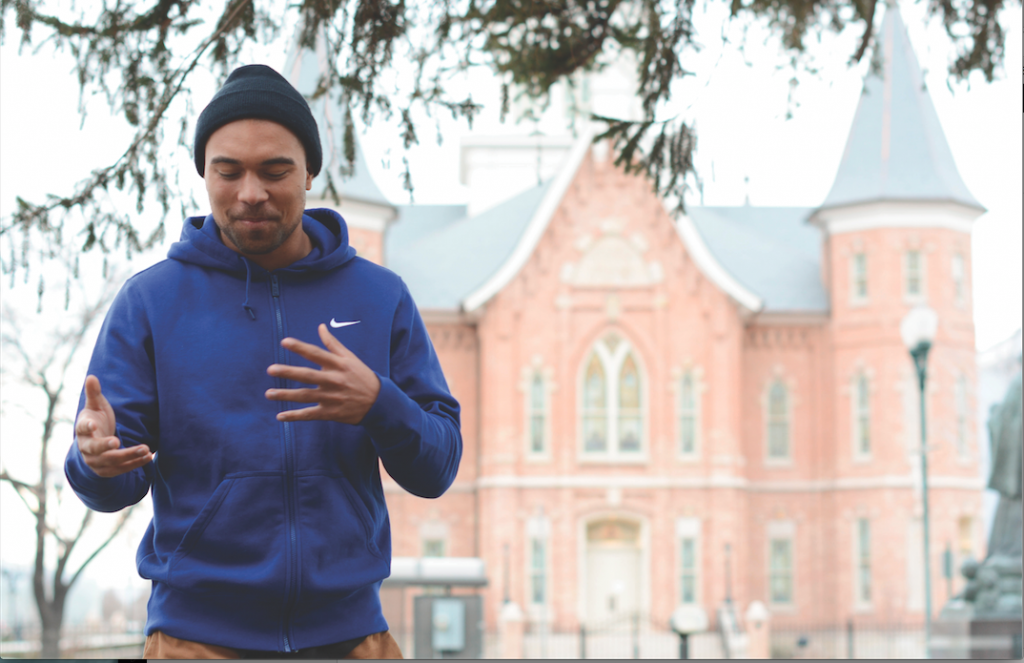 When James Curran returned from his Russian-speaking mission to Everett, Washington, he wasn’t sure what role music would play in his life. But he knew one thing: “I decided there would not be a soul who doesn’t know I’m Mormon. So I changed my Instagram and Twitter handles to @jamesthemormon. Now that’s what people call me.” (Photo by Alisha Gallagher)

He’s James Curran and James the Mormon. He raps about spiritual messages and about football. He raps, but he’s not a rapper. Sound like an identity crisis? Think again.

James Curran, known as James the Mormon, knows exactly who he is in the local music scene. He is best known for his music videos like “Restoration,” a rap about the origin of The Church of Jesus Christ of Latter-day Saints (opening lyrics: “Let me tell you ‘bout my homie, he was 14”). He’s also known for “Dreamin,’” a rap he wrote after Tanner Mangum’s miracle winning passes during the BYU football season. His videos leave viewers labeling him as a rapper. But he stands strong that he’s not.

“It’s just like my dad’s hobby is gardening, but no one calls him a gardener,” James says. “My dad works 12 hour days as a stockbroker, he has a leadership calling in the LDS Church, he has a family and he happens to like gardening on the weekends. Rapping is like that for me.”

James didn’t even know what rap was until he was 14. With his mother serving as a U.S. Ambassador, James grew up overseas, living in China, Taiwan, Russia and finally Uzbekistan where he graduated from high school, fluent in Russian. Before graduating, he spent a year living on the U.S. East Coast — which is where he discovered rap.

“The TV channels we had in Russia were limited to local shows or the American Forces Network,” James says. “So when I came to the states I watched MTV and BET for the first time. I felt a connection to the black rappers because overseas I had always been one of the only black people in our communities.”

SONG ON REPEAT: “Sorry” by Justin Bieber. “I think he hired scientists to make the perfect song.”
DREAM COLLABORATION:  “I would give up everything in my life to do one song with Drake.”
MUSIC HERO: Jon Bellion
INTROVERT OR EXTROVERT: Ambivert
HOBBIES: “Making funny Snapchat videos with my dog Mason.”

He thought up song remixes as a hobby until he started school at BYU-Idaho, where his rapping gained so much traction that he considered dropping out. It was a fleeting thought, and he has stayed true to his rap-as-a-hobby motto ever since. He served an LDS mission, solidified his beliefs, came home and felt inspired to continue his missionary work through rap. Now in Provo with his communications degree from BYU-Idaho, he owns a successful marketing business that allows free time for his hobby — which also helps him streamline his creative process.

“I have a business mind, so I’ve figured out how to optimize the writing process,” James says. “When I find an instrumental base that I like, I can write lyrics in 40 minutes, find someone to sing a part along with my rap and schedule a recording session. In an hour and 40 minutes we have a finished song. Most people will play basketball longer than that.”

“I want to show the diversity that’s in the LDS Church so more people feel welcome,” James says. “In an African-American community, a person could find my video and see a guy who looks like them and connect with the message even if they’re not a member. Then the next time they see the missionaries they might think of this guy they once saw on YouTube called James the Mormon.”