Why Ty Detmer joined the LDS Church at BYU 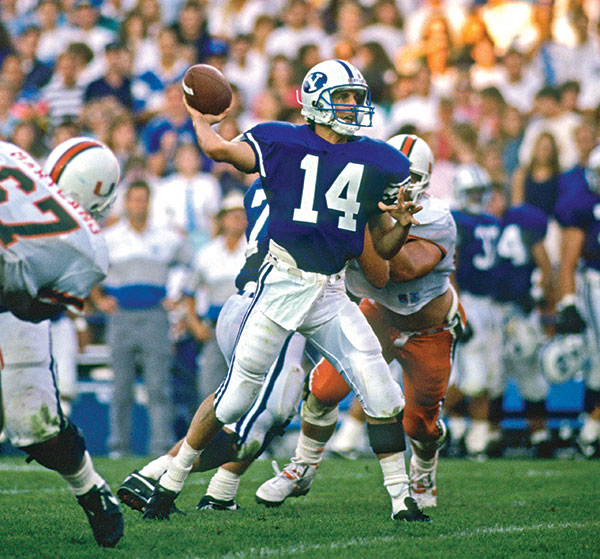 When Ty Detmer returns to BYU as offensive coordinator this year, Cougar Nation will welcome him back with open arms. As the school’s first and only Heisman winner, Ty has secured a place in the hearts of Cougar fans everywhere.

But when he came to BYU the first time as a quarterback out of Texas, he didn’t know he would become the poster child for both BYU’s excellence in football and its squeaky-clean Mormon lifestyle. While he was a religious person before coming to BYU and was often his friends’ designated driver, he knew little about the teachings of the Church before he came to Utah.

So what was it that encouraged him to join the Church?

For one, his roommate and teammate Eric Mortensen. Mortensen was the only member of the Church living in the apartment with several students of other faiths. “It was three-on-one sometimes,” Detmer said in an interview for the book “Cougar Converts: Life-changing Stories from BYU Athletics” by Talo Steves and Jedd Parkinson. “Three of us nonmembers against him as the only member, and we had many discussions and he always just held strong to his testimony. And I always respected that of him, and his conviction. And he chose not to go on a mission to pursue football but he was a missionary to me, lived the gospel, and was just a great example for me.”

Detmer also began dating a Mormon girl and knew that he needed to decide exactly what he believed about the Church. He took the missionary lessons (in the home of George Curtis, BYU’s head trainer) and recognized that the gospel aligned well with the things he already believed. Ty was baptized and later married his Mormon girlfriend.

When Ty returned to Texas and discussed his decision with his Methodist parents, he presented the idea simply. “My beliefs are a little different,” he told them, “but I still believe in Christ.”

James the Mormon, not the rapper: Religion and rap converge with local musician James Curran Next post