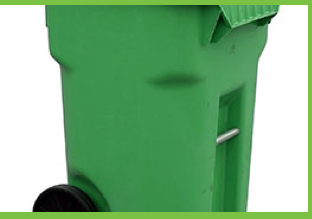 Provo’s recycling and green waste programs have changed over the last several months — weekly curbside pickups for recycling, plus a little price increase, and now the city’s got to change the yard waste service.

The solid waste special service district to which Provo belongs decided to end its composting service, effective Dec. 1, 2015. That meant closing the composting operation in south Provo, and it means that there’s nowhere for the city to take green waste when pickups start again in March.

The district had been taking the green waste material to a location in Salt Lake County where it was spread out and mixed with bio solids from waste water treatment, said Public Works Director David Decker. Then the mixture was gathered up and returned to Provo where it was sold as compost. The travel expenses added up, and “the district struggled with the operation.”

He said city staff has been looking at all its options now, from ending the green waste program, picking it up and taking it to the landfill, to picking it up, turning it into compost and selling it.

Decker told the city council on Tuesday the department recommends that the council continue the green waste and composting program, but make some changes. First, the green waste drop-off location was available to residents for free for any quantity. Commercial operations also could drop off there. The recommendation is that the drop-off location only would be open to residents on Friday and Saturday, for a $5 fee per load, and open for free to residents during spring and fall cleanups. Commercial haulers could not use the facility.

Second, the city could continue composting at the site on a smaller scale, Decker said. It wouldn’t mix bio materials into the green waste but would grind it up and sell it as a mulch material for $2 per yard. The city parks department would get the mulch for free. And though the facility wouldn’t be open to commercial operations for drop offs, the city would sell the mulch to anyone.

Any green waste not ground up and sold would need to be hauled to a landfill, he said.

Third, until the city gets a better handle on the operation, Decker said the recommendation is for the city to contract with the district or another vendor to do the green-waste grinding and hauling to a landfill.

The council will make a decision on green waste at a future meeting; a date hasn’t been set. Councilwoman Kim Santiago said it would be nice to put out a survey so the council could know if residents value the green waste program and composting.

The city recently transitioned its recycling program as well, taking over from a vendor. Now Provo collects recycling each week, though Decker said the change took a little longer than expected because of the difficulty in picking up the old recycling containers. He said he’s not aware of any remaining issues, but if anyone has a problem he asked that they call Provo customer service at 311.

Come cancer or pregnancy: Life, death and doctors battle for woman diagnosed with cancer in her second trimester Previous post

26 inspirational quotes about New Year's Resolutions, just when you're about to quit Next post