Home Life Come cancer or pregnancy: Life, death and doctors battle for woman diagnosed with cancer in her second trimester

Come cancer or pregnancy: Life, death and doctors battle for woman diagnosed with cancer in her second trimester 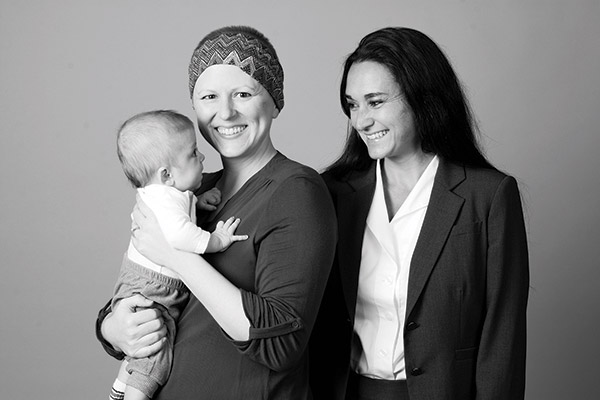 Stephanie Partridge (left) was pregnant with baby boy number five when she was diagnosed with triple positive breast cancer. Dr. Jennifer Tittensor is one of the many doctors who kept Stephanie and her baby alive. (Photo by Alisha Gallagher)

Stephanie Partridge was sitting on a couch in her living room when her husband came downstairs.

Brett had logged onto a hospital patient account to see the results of his wife’s biopsy for a lump she noticed on her breast. The biopsy results: Ductal carcinoma. Breast cancer. And she was 16 weeks pregnant with baby boy number five.

“In that instant, with death and a new life going head to head, I was afraid my baby and I were both going to die,” Stephanie says.

Minutes later, Dr. Ryan Jones, the doctor who first examined her, called to express sympathy and to help her through the next steps. He had already set up her appointment with Dr. Jennifer Tittensor, general surgeon at American Fork Hospital. Days later, Stephanie and Brett were in her office.

“When I met Dr. Tittensor for the first time, she didn’t just tell me it was going to be OK,” Stephanie says. “She told me what was happening and gave me all the facts. I could tell she was mourning with me.”

Because Stephanie was pregnant while undergoing chemotherapy, an entire team of doctors worked on her treatment. She met with an oncologist, a perinatologist, an OB/GYN, a surgeon, and other medical professionals who poked, prodded, examined and supported her — and talked behind her back. In a good way.

[pullquote]“In that instant, with death and a new life going head to head, I was afraid my baby and I were both going to die.” —Stephanie Partridge, cancer patient [/pullquote]

A group of specialists at the American Fork Hospital Breast Center of Excellence gathered weekly to discuss Stephanie’s case. As a member of that group, Dr. Tittensor knew they were doing everything they could to help Stephanie, but it still wore on her.

“Patients like Stephanie aren’t much younger than I am, so their challenges hit home,” says Dr. Tittensor, mother of two girls. “She’s a mom, she’s pregnant, she has kids at home — it’s overwhelming because that could have been me. And some day it might be me.”

During chemotherapy, there were days Stephanie only had energy to help her kids with homework for a few hours before needing to rest again. Her bedroom in Cedar Hills became a refuge when her husband and friends taped sheets of butcher paper to the walls with scriptures, inspirational messages and happy images to lift her spirits during the hardest days.

The countless appointments and months of fighting the cancer monster — as she explained it to her children — all converged on August 7 when she delivered a healthy baby boy via cesarean section, like each of her four older boys. She named him Brett Garnett, after her husband. Garnett means “armed with a spear.”

“It was the first C-section where I wasn’t scared at all,” Stephanie says. “Unlike my other four boys, I got to hold Brett for a while before they took him to be examined. I could see him, smell him, I could feel him breathing and I knew everything was going to be OK. My next thought was, ‘Now I just have to beat cancer.’”

Stephanie has undergone 10 rounds of chemotherapy, a lumpectomy, a double mastectomy and is in the middle of reconstructive surgery. Then she has five weeks of radiation and years of taking prescription medication to make sure the cancer doesn’t return. Her community of medical supporters keeps growing, and she doesn’t mind — because this time, a pediatrician is on her side, too.

Another change coming to Provo trash pickup Next post