Home Things To Do Events 5 Reasons to Come, Come Ye to Saint George: Utah’s Dixie is a winter wonderland — minus the winter

5 Reasons to Come, Come Ye to Saint George: Utah’s Dixie is a winter wonderland — minus the winter 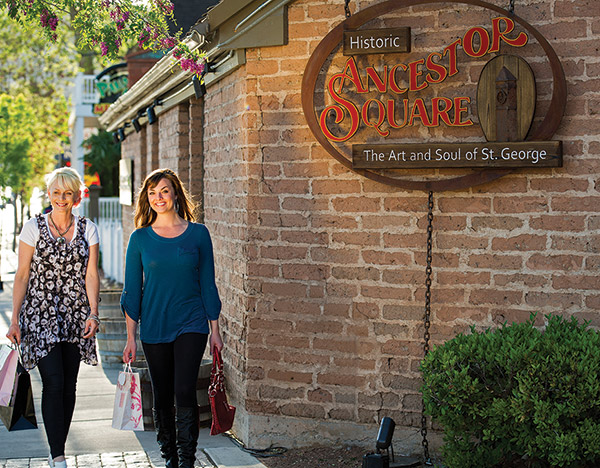 Ancestor Square is a revitalized area of downtown St. George that includes more shopping options — as well as restaurants and art galleries. (Photo by Dave Becker)

Many birds — at the first sign of cooler weather and shorter days — migrate to warmer climates, which makes nesting easier and resources more abundant.

With birds as a guide, Utahns can migrate from mountain skiing to desert golf in a matter of hours — thanks to the southern oasis of St. George.

St. George is the Provo relative that always has a tan, a cold drink and golf clubs in the trunk. This is especially true in late January and February as Utah is finishing up a long winter and St. George’s grass is literally greener.

To get excited for President’s Day weekend down south, here are five reasons to make the 259-mile journey down I-15 to find the birds and their chirp-worthy climate.

For many retirees (or even those with flexible schedules) getting out of the white stuff during the winter is appealing. St. George is nationally regarded as a great draw for life after retirement — and Washington County also has a growing economy that works closely with areas of the Wasatch Front.

“It’s a smaller community, but it has all the amenities of a larger metropolitan area including shopping, restaurants, cultural opportunities — such as Tuacahn — and a university,” says Greg Sant, southern Utah division manager for Perry Homes.

Besides retiring to the area, others — known as Sunbirds — split the year between Utah Valley and a home down south.

2. Everyone loves a Parade

The Southern Utah Home Builders Association puts on one of the premier Parade of Homes events in the country. This year will be no different.

The 2016 Parade of Homes features 28 homes from some of the area’s top builders.

In addition to being popular with visitors who are considering a move to Dixie, the Parade gives a fresh approach to design, architecture and landscaping that is appealing to a growing number of Utah Valley residents.

“The Parade of Homes has been voted one of the best multi-site Parade events in the country because it has a variety of home sizes — from the $300s to multi-millions — and gives you great ideas for your home as well as seeing the dream of the multi-million-dollar home,” Greg says.

Information about tickets and homes is available at paradehomes.com. 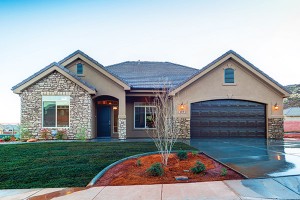 The 2016 St. George Parade of Homes is planned for Feb. 12-21 and is a huge draw for Wasatch Fronters — both in and outside the homebuilding industry.

3. Theater under the stars

The warmer climate also means you don’t have to wait for July to enjoy high-quality musical theater outdoors.

Starting in March, the Tuacahn Amphitheater — located just outside of St. George in Ivins — hosts Broadway-quality shows in a one-of-a-kind venue. In fact, when enjoying an evening at Tuacahn, the majestic red cliffs in the background enhance the show as the ultimate supporting cast member.

The 2016 season is highlighted by classics like Peter Pan, Tarzan and The Hunchback of Notre Dame.  If musicals aren’t your thing, the amphitheater will also host Jay Leno (March 25), REO Speedwagon (April 2) and The Beach Boys (April 28-29).

There’s something liberating to the soul about an round of golf — in February. If this idea appeals to you, then make your way to the Red Rock Golf Trail (redrockgolftrail.com) to plan a few days of green grass greatness.

The Trail has packages that include hotel accommodations and rounds available at one of 10 area golf courses.

Unlike the rest of the state, some of Dixie’s best golfing is done in the early season — before temperatures soar.

If golf isn’t your thing, hit some of the area’s best shopping options. Buy some cool sunglasses or shorts at the Outlets at Zion. The walkable shopping experience is an efficient way to get the most out of your dollar.

Ancestor Square is a revitalized area of downtown that includes more shopping options — as well as restaurants and art galleries.

St. George is where “pioneer” meets “modern” in a charming, take-a-selfie kind of way.

A (second) home, sweet home: What to look for when buying a home in St. George Next post