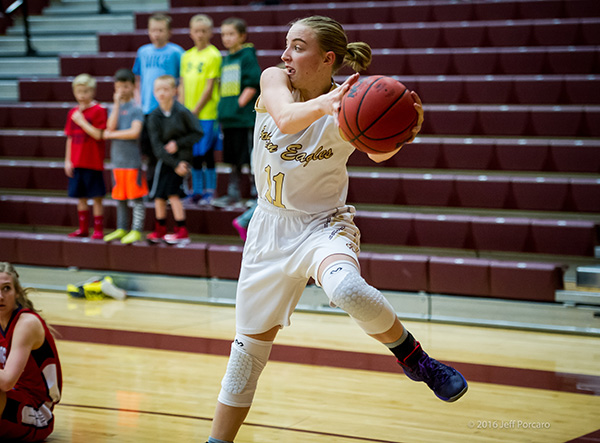 Basketball domination is wired into the family DNA of Lexi Rydalch and Liz Eaton.

Rydalch has evolved into one of the top offensive threats in the nation during her BYU career. The senior guard ranks in the Top 10 in scoring nationally, averaging 23.5 points per game. Eaton is also enjoying a memorable senior season at Maple Mountain. The future BYU guard leads the state in scoring, averaging 27.9 points per game, and ranks fifth in rebounding with 11.2 rebounds per contest.

These sisters have become BYU women’s basketball answer to the Haws family on the men’s team.

“We produce scorers out of our family time after time,” Rydalch said, noting that a love of basketball runs through her entire family. “It really comes down to family culture and philosophies. When you’re around that so much, it produces the same things.”

Growing up in a basketball family has produced two sisters who are dedicated to the sport in a way few of their peers can match. It shows in everything from intense one-on-one games between the two throughout the years to weekends spent watching film together and discussing plays, strategies and other things related to basketball.

Both sisters knew that playing basketball at the college level was what they wanted to do before they started high school. Rydalch is living out that dream and Eaton will get to take her turn soon enough.

Their focus and dedication has enhanced their natural talent to a level most players can only dream of reaching.

“What makes us consistently good players is we look at basketball as something bigger than just a game,” Eaton said. “Having a bigger perspective with basketball is what makes players great. It’s not just a game and it has really great life lessons you learn on the court and off the court. That’s what helps us with our game. It reinforces everything.”

Loving the game has helped Rydalch continue to grow during her time at BYU. She ended up suffering a torn anterior cruciate ligament in her right knee during her second season in the program. The injury cost Rydalch all but eight games that season.

Being sidelined for almost a complete season and coming back from injury helped Rydalch identify her inner fears and work to conquer them. Overcoming those mental blocks, she believes, has made her the type of player she is now.

“I found I’ve had to get a lot tougher mentally and change a few things in my character to become a better player,” Rydalch said. “Once you figure that out — life is not as hard when you have the right character.” 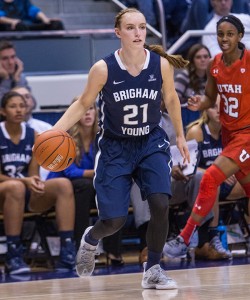 Rydalch has played a huge role in putting BYU in contention for a West Coast Conference regular season championship. The Cougars have held a Top 10 RPI ranking at different points this season and appear poised to make some serious noise in March.

It all starts with the example set by Rydalch. BYU coach Jeff Judkins says she is the single most difficult player to guard in the WCC because of her all-around abilities. She can score in a variety of ways — slashing to the rim, popping a pull-up jumper, draining a 3-pointer. Rydalch can also rebound, get out in transition and handle the ball under the pressure.

All of it comes back to a work ethic that is second to none. Judkins said Rydalch is the type of player who, if she misses free throws in a game, will be back in the gym early the next day shooting 500 free throws.

“She’s the first one in the gym,” Judkins said. “I come in the gym here and she’s the first one. Does she need to do that? Are her minutes going to get cut? No. She watches more film than any player on the team by far. That’s what made her special. Yeah, she has the athleticism and she has the talent. But she also has the drive.”

Eaton aims to follow in her sister’s footsteps. She wants to make an immediate impact as a freshman when she gets to BYU. She also wants to cap her high school career with a state championship.

The best part for Eaton is that she has watched her sister create a formula for success that she can follow over the next few years.

“I’m just excited to be a part of that program because I know how it’s going to be,” Eaton said. “That’s the advantage of having Lexi (play at BYU) before me. That relieves the pressure, because I know exactly what I’m going to get with the coaches and with the players. It gives me an advantage. That’s what I like about it.”

Rydalch has one more goal she wants to achieve as her career with the Cougars winds down. The senior has her sights set on helping BYU make another run in the NCAA Tournament.

She was a part of the Sweet 16 run two seasons ago. The success brought tons of positive attention to the Cougar program. Winning those games has been the defining moment of her BYU career and the highlight of her basketball life.

“That’s my main goal here at BYU,” Rydalch said. “I want to take the team deep (into the NCAA Tournament) and win championships and make noise in the world and get BYU’s name out there and hopefully spread the gospel through that way.”

A (second) home, sweet home: What to look for when buying a home in St. George Previous post