8 hiring and firing tips to get a stellar staff 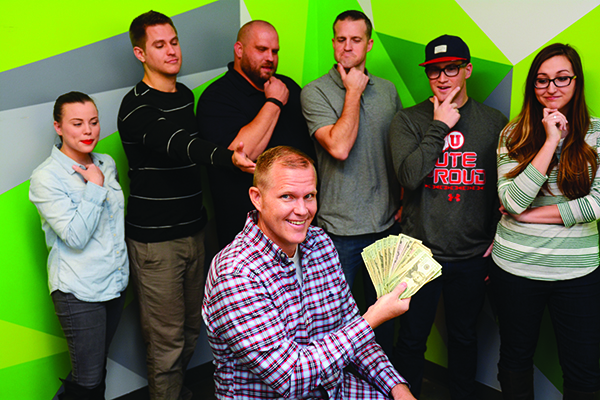 Infusionsoft’s Brad Jenson (front) has led the charge in offering new hires $5,000 to quit. He says it’s a small price to pay for protecting the culture. (Photo by Alisha Gallagher)

It’s an intriguing proposal — but that’s just what Lehi’s Infusionsoft is counting on.

“Our on-ramping experience is a full week of training focused on our culture, values and customers,” says Brad Jenson, GM at Infusionsoft. “We implement the offer at the end of it, and every member of that class is presented with a letter asking if they want to accept $5,000 in exchange for leaving Infusionsoft. When we offered this deal to the first group, we had 100 percent rejections of the money. Rejection never felt so good!”

In six years of bribery, the tech company has written only four celebratory checks.

“Every time, we celebrate the preservation of our culture,” Jenson says. “When that first person accepted, the reaction was shock. But we quickly realized it did what it was supposed to — prevent a poor culture fit from entering the ecosystem. That $5,000 is a bargain.”

Hiring is hard. And expensive. So it’s crucial to fill your company with the right people. Here are eight tips for hire, plus eight tips for when a hire crashes and burns.

“Hiring for company fit is more important than specific knowledge or experience,” says Marilyn Schneck, an HR consultant at Provo-based Employer Solutions Group. “If an individual has the aptitude, they can be trained — but you can’t train personality. Ask questions that reflect the culture of your company. If it’s a collaborative environment, ask a question like, ‘Give me an example of when you worked with a group to achieve a significant goal. What processes were used and what role did you play?’”

“Dream lists for a candidate are OK, but if you set your requirements higher than what is actually needed for the role, you may miss out on some great applicants,” Schneck says. “If you really don’t need a BS or an MBA to do the job, don’t make it a requirement.”

“So many things that get asked in interviews are illegal. Many things considered conversational can get you into trouble. Think of things that could bring a discrimination charge such as race, religion, nationality. etc. For example, if you are interviewing someone with a unique accent, you may be curious as to where they are from; so you ask. If they tell you, and you don’t hire them, you could have a national original claim against your organization. Other areas to avoid include marital and family status, as well as disability. Even asking if a person has a car can be discriminatory because it may impact certain minorities. A great question to ask is, ‘Can you perform the essential functions of this job?’ My rule of thumb is if it isn’t work related, don’t ask.”

“One area that doesn’t get shared enough is the culture and work expectations of the organization,” Schneck says. “If you are a nose-to-the-grindstone type of place, or if you have a very non-structured environment, let your candidates know during the interview process. People thrive differently in different environments. It is better to have them bow out before you hire them than after.”

[pullquote]To the hirees … “The interview begins before the resume is sent. Craft your resume to fit the position. Don’t be lazy. Do your homework.” — Marilyn Schneck, ESG[/pullquote]

“Lack of preparation on the part of the interviewer is another big mistake. I like to have a set of prepared questions to ask all candidates so I can compare apples to apples,” Schneck says. “However, I also study the resumes so I can ask specifics based on each individual’s skills and experience. I take notes on each candidate so I don’t have to rely on my memory.”

6. Ask and ye shall receive.

“The best questions are high-gain,” she says. “Asking open-ended questions that allow for discussion will give the interviewer a lot of information. Examples are: ‘If this particular thing were to happen, how would you handle it?’ If the role requires specific technical knowledge, also ask questions related to know-how.”

“There is a term used in the HR world called the Halo Effect. There are candidates who come in and sweep you off your feet, take control of the interview and make you feel so good. Somehow you never get to the meat of the interview, but it doesn’t matter, you just love them. Then you hire them and can’t figure why they can’t do the job.”

Be discerning. Be thorough. Don’t get swayed by personality alone.

Hiring too quickly will only slow the company down in the long run. Harried decisions make for hurtful hires.

2. Mentor at every opportunity.

“Coach your employees when they are having issues and ask them how you can help them improve. If you can show that you worked with the individual — but their behavior didn’t change — it’s much easier to justify if the termination is ever questioned.”

3. This is no surprise party.

“Occasionally it happens, but in reality, no one should ever be surprised they are getting fired,” Schneck says. “Meet with the employee personally. Explain the reasons for the termination and anything you or the company has done to help them improve. It’s hard, but it’s best to give the employee the reason you are ending their employment — and then end the conversation.”

“Don’t start the conversation with all the good they have done. If you do, they won’t hear the reasons you are letting them go and they’ll just be confused as to why they are being fired,” Schneck says. “Avoid making it personal. Don’t say it’s poor performance if it’s really misconduct. Poor performance is when an individual wasn’t a fit for the role and they couldn’t do the job sufficiently. Misconduct is not following the rules.”

[pullquote]To the firees … “Be honest with yourself. What could you have done to avoid the termination? Don’t burn bridges. Although it’s hard, do your best to keep a relationship with the former employer.” — Marilyn Schneck, ESG[/pullquote]

“Don’t argue or raise your voice. Firing when the manager is angry is a big mistake.”

“It’s common for employers to both give up on an employee too soon and also to not make the decision soon enough. I once worked with a manager who had an employee who was chronically late to work. After about the first five tardies he told her she may be subject to termination if she was late again. Eight months and 90 more tardies happened before he finally ended her employment. That was too long!”

“When it comes to timing, look at each case individually,” she says. “Many companies like to do terminations on Fridays when the other employees are leaving. That way the office is empty when the individual leaves. The downside to that is management doesn’t have the opportunity to let others in the organization know what has happened until Monday. With social media, that gives time for gossip to brew over the weekend. Mid-week tends to be best, near the end of the day. That way the manager can meet with employees to let them know the individual is no longer with the company and answer questions that don’t violate confidentiality. As for cleaning out their desk, it’s a good idea to have them come back at a time where the office is empty and they’ve had time to cool off.”

“We don’t hire people to fire them. When you see an employee faltering, talk with them. Sometimes there are things happening under the surface that you can help fix. Maybe they need additional training. Maybe their spouse is sick. Maybe the role isn’t a good fit, but there is somewhere else in the organization that could use their expertise. Letting someone go should always be the last resort.”