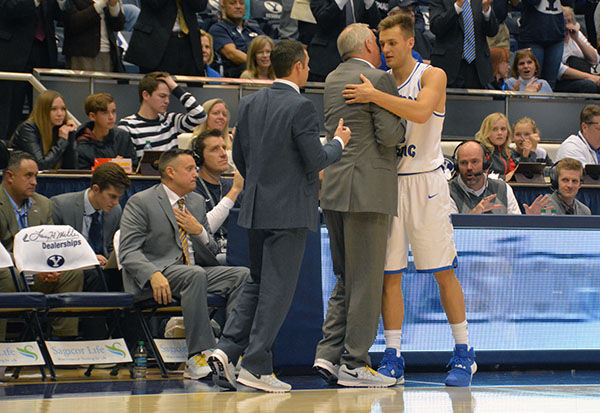 “I’ve just always done that and it’s been just remarkable to see it add up,” Collinsworth said. “At the start of the season I wasn’t really aware I didn’t need to average a lot of rebounds a game to get this. It’s surreal. It’s a great accomplishment and it’s just how I play. I’m the best point guard rebounding in the country and that’s just how I’ve always played. Nobody’s going to rebound better than me for my position. I try to do that day in day out for my team.”

Earlier this week, Collinsworth explained why rebounding is a huge part of his game.

“That’s a big emphasis for me. It’s part of my game is I can rebound. I don’t know how or why, but I can. So it is a big focus every game. For me it gets me aggressive. When I crash the offensive rebounds, when I get defensive boards, it gets me aggressive in every aspect of the game. For me as an individual and for the team, I need to rebound for me and the team to be successful.”

Collinsworth, who scored the first 7 points of the game, led the team with 24 points, 4 rebounds and 10 assists. In 10 days, Collinsworth has set a new record in two all-time categories: rebounding and assists.

“If you are the leading assist guy and the leading rebounder in a school where it has as much basketball tradition (as BYU), it’s a guy who’s played his heart out night after night,” said BYU coach Dave Rose.

Rose said tonight’s game was a game between “two teams that were desperate for a win,” and after losing 65–71 to Pepperdine last Saturday in Malibu, BYU wasn’t going to give this game up. 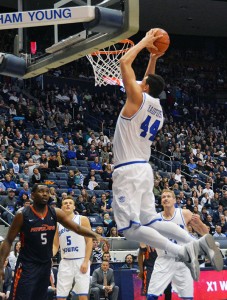 BYU sophomore Corbin Kaufusi ended the game with 10 points. This dunk didn’t count because the ball went halfway in and bounced back out. Rose said about the dunk: “The ball has got to go all the way through the net. You watch a lot of games. You won’t see that happen again. It’s a pretty freak occurrence, but it only got halfway down and somehow came back up again.” (Photo by Rebecca Lane)

While Zac Seljaas — who has become a regular offensive contributor for the Cougars over the past month — was out with a right shoulder injury, Rose was impressed with how other players stepped up, which included freshman forward Jakob Hartsock.

Hartsock made his first three 3s of the night, which were the only points he scored, but those points helped the Cougars, who were lagging behind at the time, catch up.

“Coach has always said he has confidence in all of his players when he puts them out there,” Hartsock said. … “As long as we have confidence and we play as a team, that’s when we are best. I’m grateful for the chance I got to play and the confidence coach had in me.”

Rose is hopeful that Seljaas will return to practice in the coming week, but he says now they have to “wait and see” as Seljaas’ shoulder is very swollen and has restricted motion.

“We look forward to early in the week to see what he can do,” Rose said. “We really need Zac and we got great minutes out of some other guys, which is a really good sign for us to grow our team, but it would be nice to get him back as soon as he can.”

BYU’s next game is against Saint Mary’s in the Marriott Center on Thursday, Feb. 4.

We Are Family: The Parkers have been fighting cancer together — and winning Previous post