Home Life A Grand Life for Singing: Provo’s Paula is one of 400 voices that celebrate faith and music in MoTab

A Grand Life for Singing: Provo’s Paula is one of 400 voices that celebrate faith and music in MoTab 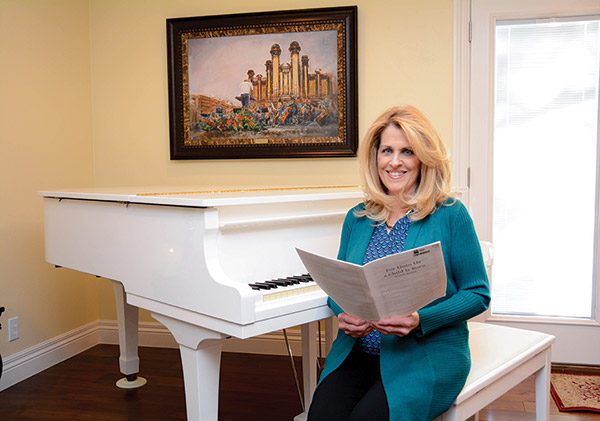 Paula Williams always considered herself a second alto, having grown up singing along to Karen Carpenter. But an a cappella audition revealed that she was a soprano, and she has been singing the high notes ever since. Paula is a soprano in the Mormon Tabernacle Choir. (Photo by Alisha Gallagher)

Paula Williams has been a member of the Mormon Tabernacle Choir for four years — but if you don’t recognize her from the choir’s LDS General Conference performances, you’re not alone.

“I’m the shortest of the sopranos, so I’m always at the front — and the cameras almost never show the first three rows of sopranos,” Paula says.

Though her 5’2” frame slips below the cameras, her voice is one of nearly 400 that unites to sing religious and inspiring music throughout the year.

Paula was raised in a musical family and grew up singing in quartets in small festivals in Utah. Since she grew up singing along with Karen Carpenter, she was convinced she was a second alto — until her first a cappella choir audition at BYU.

“Right after my audition ended, they told me I got in,” Paula says. “I left the room wanting to scream because I was so excited. But I forgot to ask which part I’d be singing, so I went back. They told me I was a first soprano! I was psyched out, but now it’s all I know.”

Paula kept singing as a hobby while she raised her children. Then she decided to audition for the Mormon Tabernacle Choir. 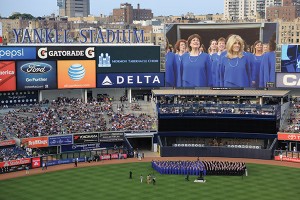 As the shortest soprano in the Mormon Tabernacle Choir, Paula is rarely highlighted in the broadcast performances from Temple Square. So she was excited to see this photo of her, featured prominently on the Jumbotron in a performance at Yankee Stadium during an East Coast tour in the summer of 2015.

She was accepted into the choir after an intense application process required of each member. She filled out an application and mailed in a recording of her voice, took a theory test and auditioned in person for choir director Mack Wilberg. After passing each test, she and her fellow new members were unofficially accepted and attended training at choir school and the Temple Square Chorale twice a week for 16 weeks.

“After working so hard to get in, I will never forget performing in General Conference for the first time,” Paula says. “My son passed away from stomach cancer when he was 25, and his favorite song was ‘Come Thou Fount of Every Blessing.’ We happened to sing that song my first time as a full-fledged member of the choir.”

Participating in the choir requires sacrifice. Paula carpools to rehearsals from her Provo home on Thursday and Sunday, memorizes music at home every other night and wakes up at 4:30 a.m. to arrive on time for the Sunday broadcast of “Music and the Spoken Word.” It’s a lot to take on, but Paula feels like she’s living a dream.

“I’m in my fourth year, and I still pinch myself when we’re sitting in the Conference Center for General Conference,” Paula says. “If I had let fear dominate and never tried out, I might have missed out on the most amazing experience of my life.”

11 tips for a smoother day skiing with kids Next post