How sports led 4 apostles to their wives 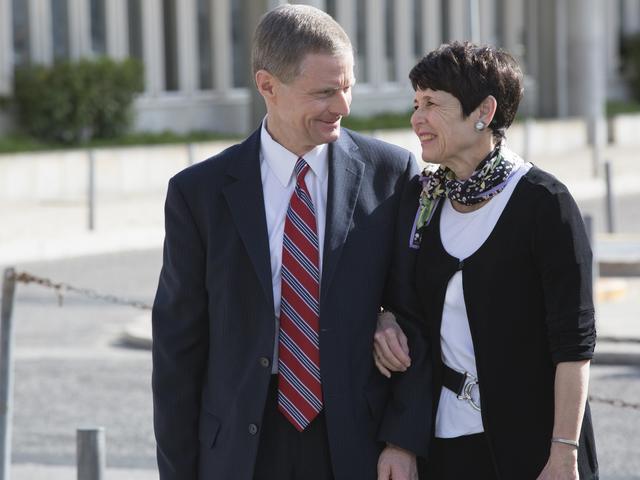 Members of the Quorum of the Twelve Apostles of The Church of Jesus Christ of Latter-day Saints always sit on the front row of the stand at general conference. Their wives also sit on the stand in the Conference Center. That much, everyone knows.

But what many may not realize is that a third of that quorum — four of its members — met their wives in another stadium-like setting. This Valentine’s Day, see how sports ultimately led four apostles to their wives — and when you’re done, you might want to buy tickets to a sporting event for you and your valentine.

Met: While he was announcing high school basketball games over the radio. She was on a local drill team.

He said: “She just brought out the best in me. … June has kept me from getting pompous and self-important.” (Ensign, June 1984)

She said: In an interview with the Ensign, she said she saw Elder Oaks and “stood around until (she) was introduced.”

The young Dallin Oaks got his first job at age eleven or twelve sweeping a radio repair shop. This first job fostered an interest in radio, and by the time he was a college freshman, he was announcing basketball games on the radio. June was a high school senior and was a member of the drill team when she first saw him, and they were introduced. After the next game, he asked to drive her home and they began dating.

Met at: Dixie High School football and basketball games where he was an athlete and she a cheerleader.

She said: “I remember writing home to my cousin about how I had just met the smartest boy in school, who was also a terrible tease, and even though I couldn’t stand him at the time, I had the strangest feeling, even then, that, when I was older, I would marry him.” (Ensign, June 1983)

Jeffrey R. Holland lettered in football, basketball, baseball and track as a student at Dixie High School. Patricia Terry was a cheerleader who moved to St. George during high school. Though they were engaged 30 days after he returned from his mission, they got married several months later and ultimately were friends for six years before they married.

Source: Liahona, August 1995 and “Some Things We Have Learned—Together.”

He said: “My wife, Susan, is a virtuous woman and a righteous mother. You will quickly see that purity and goodness are evident in her countenance. I love her and appreciate her more than words can express. I thank her for the woman she is, for the lessons she has taught me, and for the love we share.” (“In the Strength of the Lord,” his first general conference address)

She said: “He threw a pass and I caught it.” (BYU-Idaho Library)

David A. Bednar and Susan Kae Robinson were students at BYU when they met. She was a senior studying elementary education. Elder Bednar had been a quarterback in high school, and he threw a pass to Susan, who caught it. She said in a recent Face2Face event that it wasn’t love at first sight, but that they fell in love over time.

Met at: BYU football game. Both were with other friends and interacted only briefly; they didn’t even learn each other’s names.

She said: “Well, isn’t that just my luck? I’ve just run into the kind of guy that I would like to date, and it’s never going to happen.”

He said: “I remembered her. That face stuck in my mind. … (I) had a hard time talking her into it. She wasn’t really keen on doing a blind date.”

After their first, brief interaction at a football game, Elder Christofferson was determined to find Katherine and get to know her better. When his college yearbook arrived that summer, he found Katherine’s picture and learned her name. After that summer, he learned that his roommate knew Katherine and asked him to set them up on a date.

The Man Behind the Music: From Marie to Martina, Tyler Castleton strings notes together for the stars Previous post