Home Life The Man Behind the Music: From Marie to Martina, Tyler Castleton strings notes together for the stars

The Man Behind the Music: From Marie to Martina, Tyler Castleton strings notes together for the stars 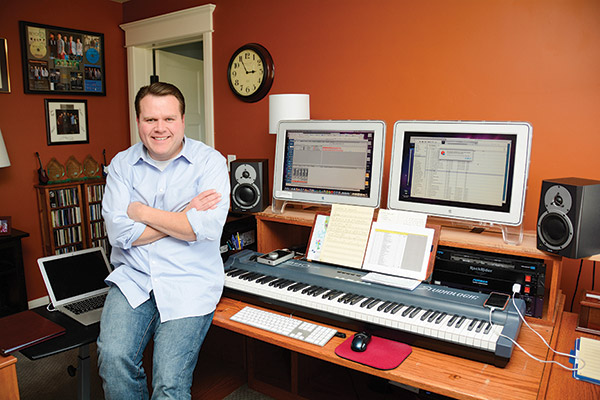 Musician Tyler Castleton has been writing and composing songs for more than 20 years, and he knows inspiration can strike any time. He keeps a notebook in the passenger side of his car to capture passing ideas for music or lyrics. (Photo by Alisha Gallagher)

SONG ON REPEAT: “Little Hercules,” by Trisha Yearwood
PRIME CREATIVE TIME: “When the kids are asleep — 10 p.m. and later.”
INTROVERT OR EXTROVERT: Introvert
ALTERNATE CAREER: “I wanted to be a sportscaster until I realized I couldn’t not be a musician.”
HOBBIES: “I try to read a book a week. Right now I’m working on David McCullough’s ‘1776.’”

You may not know Tyler Castleton, but you’ve heard of the artists he works with — Hilary Weeks, Jericho Road, Jenny Phillips, Gladys Knight, Marie Osmond and Martina McBride. Tyler has lived and worked behind the scenes as a composer, songwriter and producer since 1993 when he released his first song — “His Love” — on an Especially For Youth album.

After working with LDS musicians for a few years, the music door flew wide open when one of his pieces, “For the Love of a Woman,” made it to Martina McBride — and after a handful of rewrites, she accepted it and released it as a bonus track on her “Emotion” album.

“I remember buying it at Kmart the day it was released,” Tyler says. “I have a picture of me holding my month-old daughter with a few copies of the CD in my hand. For a while, Martina closed her live performances with that song.”

A lot has changed for Tyler since then, especially in the technology world. Tyler writes and rewrites entire pieces of music from his home studio in Vineyard. Not too long ago, that was impossible.

“During a recording session years ago with a bunch of musicians, a sound engineer said, ‘Someday I’ll be able to have a guy record a part from his home and send it to me over the Internet,’” Tyler says. “We couldn’t even fathom that yet. Now it happens all the time, and we rarely get musicians in the same room.”

That hits a sour note for Tyler, who thrives off of collaboration with fellow musicians. He travels to Nashville every once in a while to do exactly that.

“I’m a big fan of the magic and synergy that comes when musicians get in a room together,” Tyler says. “I can sit down with them, talk about life, and see a song come out of that. I’m still blown away by it.”

As an adjunct faculty member at UVU, he is passing on his years of knowledge to his students. He teaches them how to monetize their songwriting talents, how to navigate the technology that changes how they work, and most importantly, what it means to be a professional musician.

“I’ve only had success because of the opportunities and kind things that mentors and friends have done for me,” Tyler says. “Music is a competitive field to get into, so I hope I can help my students find the same level of support that got me started.”

Golden together: True love stories and advice from some of Utah's oldest (and cutest) couples Previous post

How sports led 4 apostles to their wives Next post