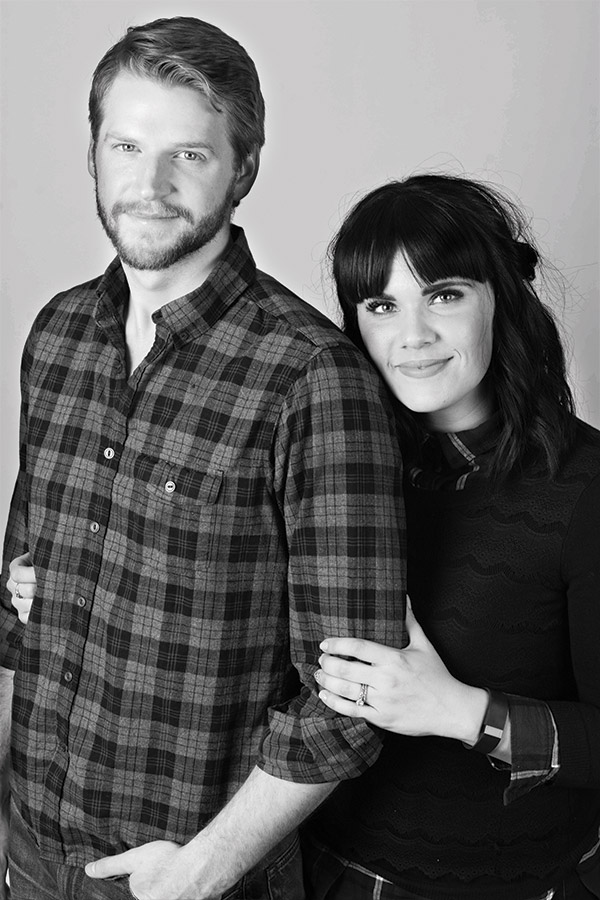 Taylor Morris (left) and his then-fiance Bailee (right) still think about the car accident that broke Taylor’s back and neck — and killed his sister Madie, but they aren’t racked with guilt about what happened. “People who are most successful at making it through hard things are those who don’t let it ruin their lives,” Taylor says. “What has happened already happened, and our best option is to find the positive in what comes next.” (Photo by Alisha Gallagher)

“Every time I see you I can hardly breathe; all the world could crumble, I’d never leave.”

Those are lyrics to the song Bailee and Taylor were singing together at the piano in Bailee’s apartment when Taylor got down on one knee, pulled out a $7 ring he bought at Kohl’s and proposed. (The real ring came later).

They had no idea their world would come crumbling down just a few hours later.

Instead of leaving the next morning to visit Bailee’s family in Arizona for Thanksgiving, they decided to leave that night.

Bailee packed a bag and raided Taylor’s closet to find clothes for engagement photos. They stocked up on snacks, drinks and games, and they picked up Taylor’s sister Madie on the way out of town.

In the car they talked about their busy semesters at BYU, sang along to their favorite songs, made pit-stops to look up at the stars, and imagined what their new lives together would be like — Taylor and Bailee as husband and wife, Bailee and Madie as sisters.

At 6 a.m., Bailee woke up to Madie’s screams from the backseat. Taylor had dozed off, and the car was headed off the road where it hit a mound and flipped over into a ditch.

“Bailee clicked into superwoman mode right away,” Taylor says. “She called out our names to check on us, then found her phone, called 911, flagged down a car and came back to reposition my upper body and help me breath better. I still hadn’t heard anything from Madie.”

During the 30 minutes they waited for an ambulance, it wasn’t clear whether Taylor was going to survive.

[pullquote]“When he started saying goodbye I said no. We were in love and we were going to get married. He wasn’t going to die.” —Bailee Morris[/pullquote]

“I was trying to keep him conscious, but when he started saying goodbye I said no. Just no!” Bailee says. “We were in love and we were going to get married. He wasn’t going to die.”

He was life-flighted to Las Vegas where doctors found that his neck and back were broken. Before he went into surgery, his mom called and confirmed his worry — Madie didn’t make it.

“It was hard to believe we lost somebody so special to us,” Bailee says. “She was too good for this earth.”

With no serious injuries of her own, Bailee kept living in superwoman mode as she and Taylor grieved — and as she helped him recover from his injuries.

“The doctor wanted me to improve mobility in my arms, so Bailee would toss napkins on my face and make me take them off,” Taylor says. “It was torture, but it was what I needed.”

They took a few classes together at BYU so Bailee could take notes for him, she drove him to and from class, and she made sure he didn’t slip on the ice on campus in early 2013. Taylor lived at Randy Boothe’s house in Spanish Fork while he recovered (Randy was the Young Ambassadors director while the Morrises performed with the group), and Bailee drove there almost every night for movie nights and card games with her fiancé.

By August 2013, ten months after the accident, Taylor was not only neck- and back-brace free, but he had married his sweetheart. They still miss Madie, but they honor her by living by her favorite quote, “Kindness is the essence of greatness,” and looking to the future with optimism.

“We appreciate what we have here and now, knowing that if something terrible is going to happen, we will be OK,” Taylor says. “We look forward with hope instead of looking back with regret.”