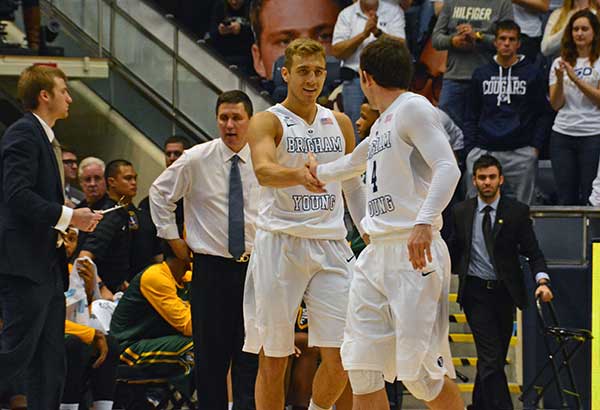 After a disappointing loss to Pacific on Feb. 6, the BYU men’s basketball team came bounding back with a vengeance to prove their worth in last week’s games.

The Cougars defeated San Francisco 114–89 Thursday night and followed it with a 96–62 win against Santa Clara Saturday evening. What is the difference? The team’s mentality.

The highest scoring game of the season, the Cougars had six players score in double digits. It’s an offensive turn the Cougars needed — and the BYU guards are the force leading BYU in its battle for a NCAA tournament berth.

“We were really, really efficient as a group of those three guards,” Rose said.

Emery had his breakout games by scoring 68 points (13 3-pointers) in the two games last week. Those numbers helped him set a BYU single-game record with 37 points against San Francisco and tied Chase Fischer for the school record of 10 3-pointers in a game. Rose said it was the “Lone Peak” Emery he saw on the court last week.

[pullquote]”He’s doing some things that freshmen here have never done before, very few have ever done. Nick is a very unique individual and no one pushes Nick harder than Nick and he wanted more.” —Dave Rose, BYU basketball coach[/pullquote]

“We were trying the whole time to keep his confidence level up by telling him he was having a special freshman season, even before last weekend,” Rose said. “He’s doing some things that freshmen here have never done before, very few have ever done. Nick is a very unique individual and no one pushes Nick harder than Nick and he wanted more. … I’m glad he was able to feel that and now hopefully that confidence we can manage how it fits with the rest of our group and our team going forward.”

“It was awesome,” Collinsworth said. “We need that kind of play. He had 10 threes; it would be nice if we could get that every game, but those are special nights and it was a special week for him. … He has a great feel for the game and it’s fun to watch.”

As the Cougars (19–8, 10–4) prepare for a rare back-to-back Thursday and Saturday night games against San Diego (8–17, 3–11 WCC), Rose wants the team and BYU fans to understand it was a team effort in last week’s wins.

“When we went on the road and scored basically 100 in both games, you can’t just do that with one guy,” Rose said. “You have to have everybody working.”

Fischer contributed 22 points per night and Collinsworth — known as Mr. Triple-Double — was working across the board with double figures both nights in scoring and more than six rebounds and assists each night. All of this feeds the fight as the Cougars hold on to hopes for the NCAA tournament. (The Cougars currently hold a 68 RPI ranking.)

“It’s like last year. We’ve been there before,” Collinsworth said. “I don’t know what will happen in the future, but I can handle business today. I can handle business tomorrow. And that’s what we are going to do. We’re just going to work hard every day and take it day by day and work as hard as we can to give ourselves the best chance and put it in the NCAA’s hands.”

But first, the Cougars have to beat the slow-paced Toreros twice this week.